The trio, and Ducati's Andrea Iannone, spent the bulk of last weekend's Phillip Island race fighting for the lead, with Marquez eventually passing Lorenzo on the final lap to take victory.

One second covered the four riders at the finish, with Iannone snatching third from Rossi, whose championship lead over Lorenzo was reduced from 18 points to 11.

"It was very interesting," Rossi said of the race.

"If we can see another race like this, we have to speak with Marquez.

"During the race it was more difficult to understand, but afterwards it was very clear that he played with us very much.

"Mainly, I think, his target is not just to win the race, but also to help Lorenzo to go far and take more points from me.

"I think from Phillip Island it's very clear that Jorge has a new supporter, that is Marc."

Marquez denied tying to help his fellow Spaniard, pointing out that passing Lorenzo on the final lap prevented Rossi's lead from being cut further, to six points.

"Of course not," he said when asked if he was trying to help Lorenzo.

"I did my race, and in fact if I wanted to help Lorenzo I wouldn't pass him on the last lap and push to the limit. I don't know why they say [that].

"I did the best race for my team and the most important thing for me is that I won.

"Sometimes you try to manage the race, but the only time I would help is my team-mate.

"If it's not my team-mate, I will push for the victory."

When asked if he felt Marquez was helping him, Lorenzo sarcastically replied: "Yeah. Mainly in the last lap, a lot." 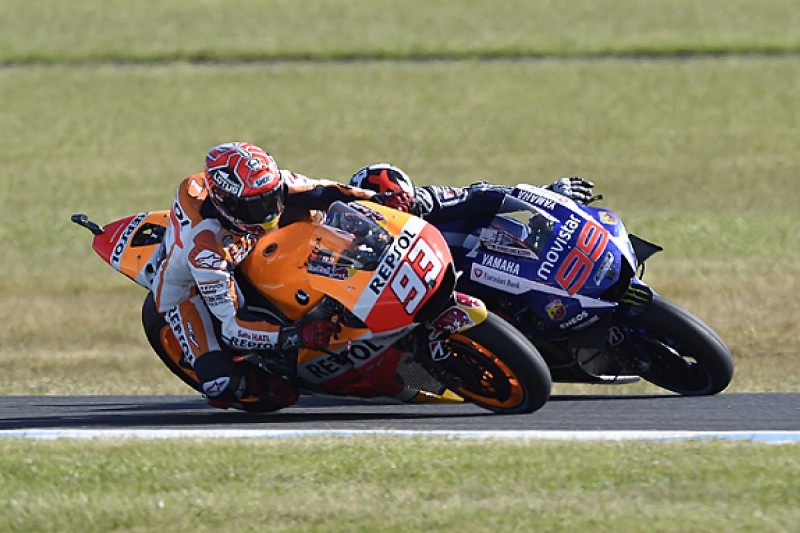 Valentino Rossi believes Marc Marquez is 'thinking like a child'