Marquez made heavy contact with Aprilia’s Espargaro at Turn 1 on the opening lap of the red-flagged Styrian GP on Sunday, which left the latter utterly furious on track.

In the second start, the pair made contact again at Turn 1, though on this occasion Marquez was forced into the side of the Aprilia rider after Yamaha’s Fabio Quartararo carved up the inside of the pair of them.

Espargaro dropped down the order to 16th after that contact and eventually retired with an engine issue.

He expressed anger at the race stewards for not handing out a penalty to Marquez, but the Honda rider doesn’t believe the collisions were over the limit and feels the blame is 50/50 across the incidents.

“We know Aleix,” Marquez said when asked by Autosport if Espargaro’s comments were an overreaction. “If I need to complain about all the contacts, what can I do?

“In Holland he touched me in the last chicane and I nearly crashed and I never complained.

“I mean, this is racing. And then it’s true – and always I try to speak honestly – in the first race, if somebody made a mistake it was me because he went a little bit wide and I go in because in that corner if you just have a doubt it’s easy that somebody can come and make up a lot of positions.

“So, I go in, I didn’t expect to have such a big contact but it was there.

“And in the second one, it was his mistake.

“I started better than him, I was in a very good position, in the brake point I was parallel with him.

“But he released the brakes and went in, but Quartararo was inside and we had contact. But first race my mistake, second race his mistake.” 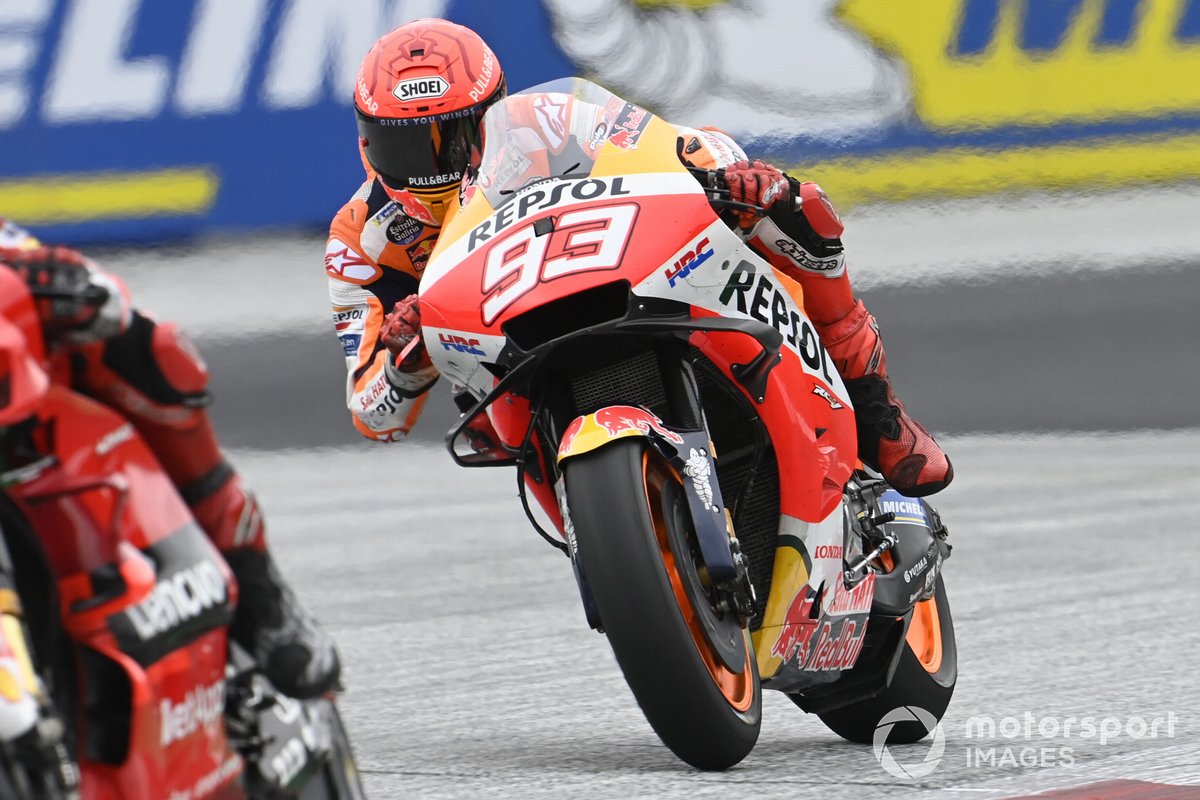 Marquez ran inside the leading group in the first race before the red flag, but struggled immediately at the restart with grip having changed tyres and could no better than eighth.

“Definitely in the first race, the potential and the performance was very high, I felt very good,” he added. “All weekend my pace was 1m24s middle, 1m24s low. I mean, the first race I was riding in a very good way, very comfortable.

“But in the second race, already on the out-lap and the first lap I realised that something was not in a correct way.

“The bike was the same, we only changed the tyres from race one to race two, and in race two from the out-lap the grip was zero and I struggled all the race with rear grip, even stopping and exiting the corner.

“It’s true the only change was the tyres but we can’t complain only about the tyres, we must understand because everybody has the same compounds, same tyres.

“But it’s true from one tyre to the other one we can lose some performance. Maybe that was the main reason today.”