While third practice on Saturday morning was dry, rain fell shortly afterwards and the track surface was still wet for qualifying.

Covering the unlikely prospect of the resurfaced circuit drying, Ducati for Dovizioso and Yamaha for Valentino Rossi had second bikes readied with intermediate tyres when Q2 started.

However they weren't needed, with Dovizioso leading the way on wets for all of the 15 minutes.

The Italian's first flying lap was a 2m11.511s, 1.624 seconds faster than his closest challenger at the time, Rossi.

Rossi, his Yamaha team-mate Jorge Lorenzo and world champion Marc Marquez all reduced that gap, with Lorenzo within 0.276s of Dovizioso when the chequered flag was shown.

Dovizioso changed from a soft wet rear tyre to a hard midway through the session and went faster again on his final lap.

With his gains coming in the final sector, Dovizioso's marginal improvement to 2m11.485s secured his fifth MotoGP career pole by 0.246s.

Another rider to improve after the flag, Rossi pipped Lorenzo by 0.056s to grab second, while third for the Spaniard still represents a return to form in wet conditions. 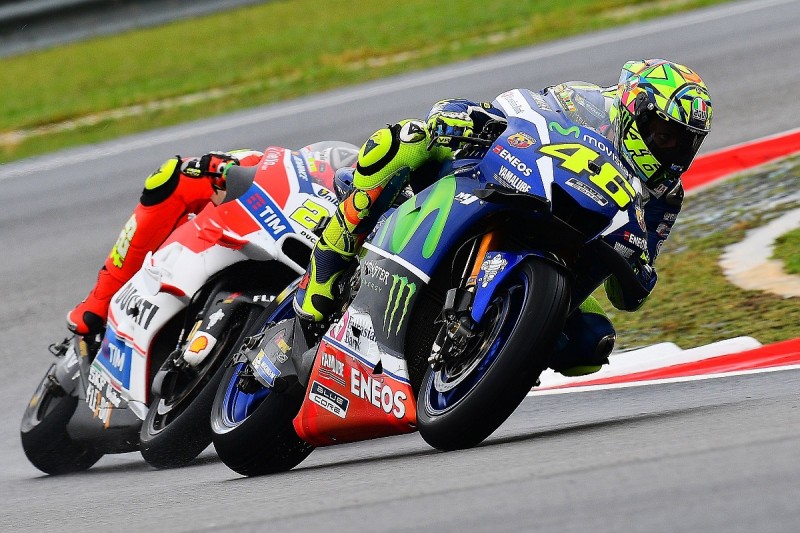 Marquez wound up fourth, the Honda rider having set his time relatively early, while Cal Crutchlow was the best of the satellite riders in fifth.

On his 31st birthday, though, Crutchlow had a torrid Saturday and was nursing a battered right hand after crashing his LCR Honda third practice.

That crash meant he had to go through Q1, and he topped that session by 1.293s, but then fell again at Turn 11 late in the main session, while 12th and last of the group.

But he got back on and jumped up to fifth after the chequered flag.

Alvaro Bautista was ninth for Aprilia, while Loris Baz made it out of Q1 with Crutchlow - despite crashing at Turn 2 midway through the session - and the Avintia Ducati rider qualified a career-best 10th.

Lorenzo hits back at wet-weather critics after Malaysia qualifying