Baz and Tech3 Yamaha rider Pol Espargaro clashed at Maggotts on the opening lap of the British GP on Sunday, prompting a red flag.

Initial checks cleared Baz of any fractures, but further inspection including an MRI in Switzerland on Monday revealed fractures in the lower part of the tibia and astragalus in the ankle of his right leg.

The French rider, who missed two races earlier this year due to right-foot injuries, also has damaged tendons.

"It is a real shame the news I got once I came to visit my doctors in Switzerland, and I didn't expect it," Baz said.

"But after several tests, they saw some fractures on my right foot.

"It's not possible [for] surgery and now is just time and rest. So I'm forced to miss the Misano race.

"Anyway, I am still fortunate not having serious injuries following the crash at Silverstone.

"This was another hard blow in my season after the one from Mugello, but I have to be positive and look forward."

Fores is currently 10th in World Superbikes on a Barni Racing Team-run Ducati, and will be making his MotoGP debut. 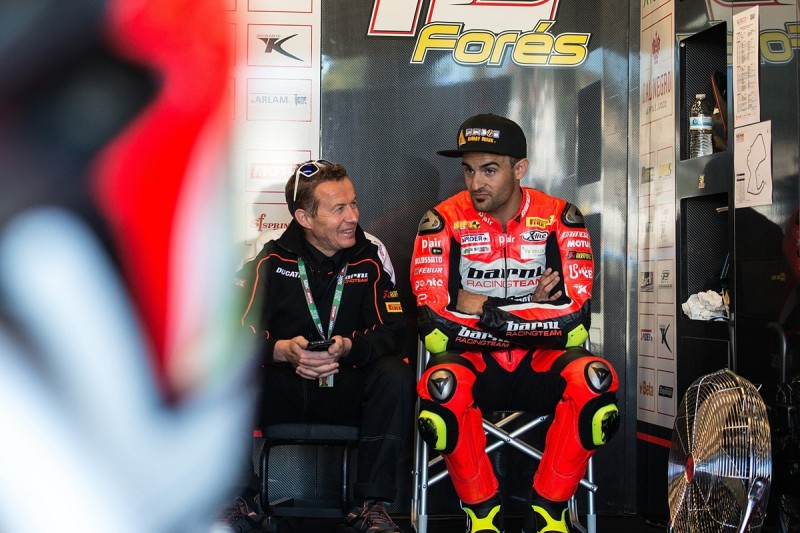 "My aim is to enjoy the maximum and leave the pressure at home," the 30-year-old said.

"I have nothing to demonstrate, the bike is completely different to anything I've ridden before.

"I have to be clever because everything will be new for me, so I only want to enjoy.

"It will be crucial not to make any mistakes and don't get hurt, because I have to race in Germany next week with my WSBK team.

"I'll use this weekend like a training session before my next race, and I'll try to enjoy as much as possible riding the MotoGP bike."