Lorenzo made a fantastic start from 10th to take the lead on the opening lap, which he maintained in the early stages of the race.

But the Spaniard had a hairy moment when he lost the front end of his Ducati at Turn 17 and, after losing significant speed, was hit by Rossi, who could not avoid the rear of Lorenzo's bike.

Both riders stayed upright and were able to continue, but Lorenzo said it was fortunate neither crashed.

"It was a very scary moment, I didn't know what happened behind me, I didn't know if someone crashed with that impact," said Lorenzo, who finished the race in seventh.

"I didn't even know which rider was it, [Marc] Marquez or another rider, but finally it was Valentino. We've been very lucky.

"With Michelin you have a little bit more grip on the edge of the rear tyre than the front.

"[It] happened at Le Mans, at high speed I lost the front, and it happened again here. Just entered a little bit more to the inside, I touched the white line and the front closed.

"To avoid the crash I had to reduce the speed. Valentino didn't expect this lack of speed in that corner and he hit me on behind.

"[I was] very lucky, [it was a] very scary moment because if it had been a crash with all the group behind, it could be very dangerous. I was lucky not to crash." 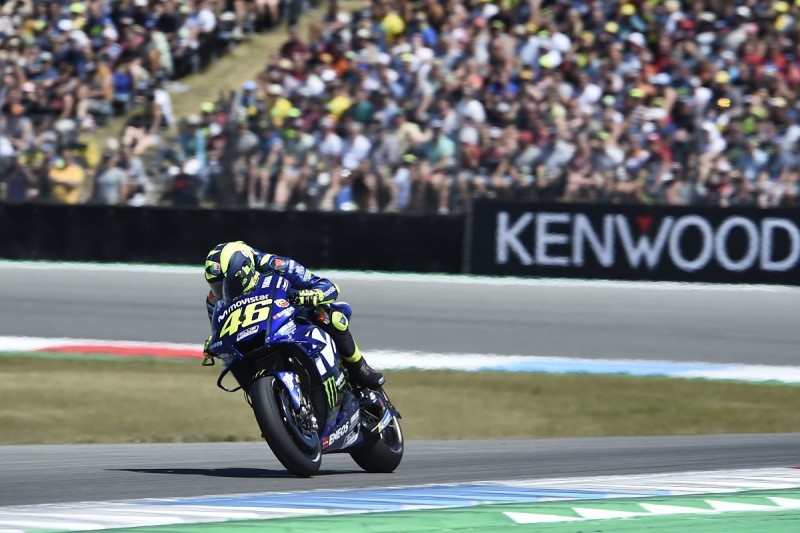 Rossi, who also had a run-in with the second factory Ducati of Andrea Dovizioso, added: "At the beginning we were very lucky, me and Lorenzo, because Lorenzo cut too much and lost the front.

"I arrived with a lot more speed and I [hit] him. But we were very lucky because I [hit] him perfect, so we didn't crash."