KTM tried a significantly updated version of its MotoGP test bike at Misano this week, as its preparations continue ahead of its return at the end of 2016

The Austrian manufacturer's RC16 machine spent three days running in Italy, where Ducati and Aprilia were also in action.

Technical director Sebastian Risse said: "We had enough time to prepare many things we have wanted to try for quite a while now.

"When it came to the bike, almost everything was new here, starting with the frame and the complete fairing, including the aerodynamics, right up to the ergonomics and the vehicle packaging.

"All of the biggest components showed their potential, and we're very happy about this.

"Now we have to put it all together and check it also at another circuit."

Mika Kallio, Karel Abraham and Alex Hofmann were on duty for KTM at the test, with Abraham getting a last minute call to stand in for Thomas Luthi at the last minute as Luthi was sidelined with concussion from a Moto2 accident at Brno.

While Kallio, who will race in the 2016 finale for KTM at Valencia, believes the updated bike showed good pace, his programme was hindered by a crash on the second day.

"Whenever we have to test I will naturally bring the bike to its limit because that's the only way we can continue to improve," said Kallio.

"Looking at the lap times we were able to confirm the performance from Spielberg on a totally different circuit and compared to when we were here before, we even improved by about two seconds.

"When it comes to the speed we are a bit closer than our last comparison with the competition.

"The completely new fairing with the new tank and rear frame didn't make such a big difference for me here, but we will get more clues when we go to the next test in Aragon, where there are longer straights." 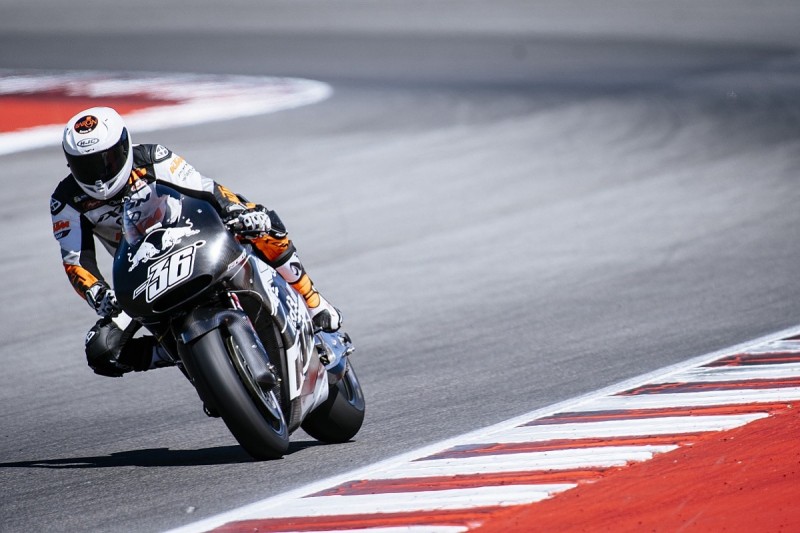 KTM publicly launched its MotoGP programme at its home race in Austria earlier this month, and its on-road vice president Mike Leitner believes expectations from outside the team are increasing rapidly.

"The public is expecting already a lot from us after the latest developments, but we mustn't forget that it's still less than a year since the official roll-out last October," he said.

"We must continue to do our homework as best we can, because only this will bring us to a level where we can be ready in Qatar in 2017.

"That is where this project's journey really is going to start and we continue to have very intensive work between now and then.

"But everyone on the team, right up to the factory engineers, remains realistic and knows what has to be done."

KTM will be back in action at Aragon next week with another three-day test.