The Austrian manufacturer enters the championship full-time this year with Bradley Smith and Pol Espargaro, alongside its existing Moto3 programme and new effort in Moto2.

Established KTM figures have filled a number of key roles, and some recruitments have come from elsewhere in the MotoGP paddock.

But without an abundance of talent available elsewhere, it has a relatively young group in the garage.

"It's not like Formula 1 where you can just go around and pick the people that you want and things like this," Paul Trevathan, who will be Espargaro's crew chief, said.

"There's not enough, to be honest, really good motorcycle people.

"Especially in Europe, you have to go and find some talent that you think you can go and train in your own way and we're all learning, this is a big point of KTM at the moment.

"Our library is zero and we're trying to fill in the library, fill it with ideas, and we have to catch up 25 years of MotoGP [experience].

"We are full of motivation and this has been a strong point I think of the group, that we're all very open-minded people trying to help each other in all of the different fields.

"So it's a big, big difference from the other manufacturers at the moment.

"Hopefully it will come good, and then be a strong point, but it's a point we had to begin from." 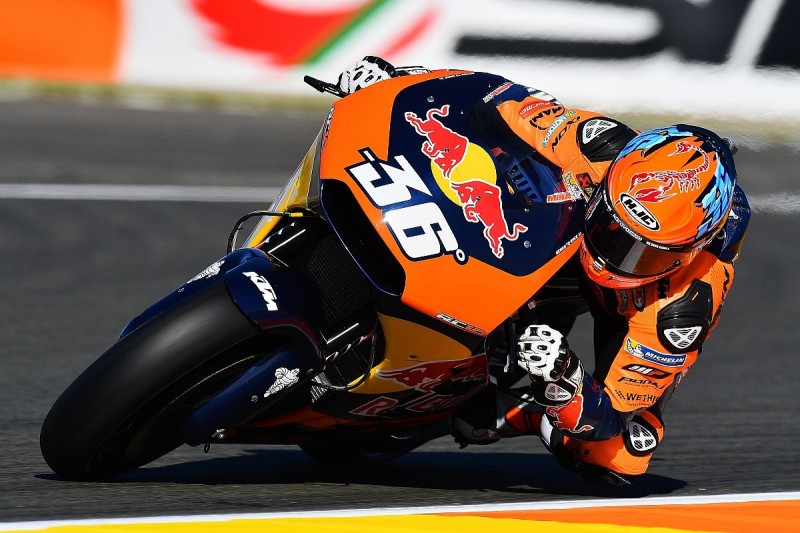 Trevathan has previously worked with Honda's Dani Pedrosa in MotoGP, and with KTM during 2016 with its Mika Kallio-led test programme.

Tom Jojic will be Smith's 2017 crew chief, the pair having worked together during the Briton's days in Moto3.

Kallio made KTM's race debut in November's Valencia Grand Prix, before the 2017 riders jumped aboard during the post-season test, while Smith also rode at Jerez one week later.

KTM would not have benefited from making other wildcard appearances alongside its 2016 tests, Trevathan believes.

"The project was so young," he said.

"I think we wouldn't have gained anything, because there are so many new people, so many things to try we really had to try to do it behind closed doors and do it step by step ourselves.

"Sure, we would love to be [racing] six months earlier, but the reality is that it wouldn't have helped where we are now.

"We really needed to get the group together, and get them working in a good way."