Jorge Lorenzo says he was more brave than fast during the early stages of the Italian Grand Prix, as he led a MotoGP race for the first time with Ducati

Lorenzo lined up seventh for the Mugello race but jumped up to third before passing Yamaha pair Maverick Vinales and Valentino Rossi down the front straight to start lap two.

He overshot San Donato, letting Rossi back past, then pounced several corners later to take the lead until his former team-mate reclaimed top spot at Scarperia.

The three-time champion faded thereafter to finish eighth, as team-mate Andrea Dovizioso won, and felt his early charge was more about bravery than pace.

"I wasn't faster than them," he said of the Yamahas.

"I had a lot of [top] speed and I was very brave, but I wasn't faster.

"But, obviously, I made a good start and I was third in the first corner.

"And the top speed in the sixth gear, especially, was much faster than the other bikes, so I could arrive into Turn 1 in first position.

"In free practice four yesterday, I was one of the guys with better pace, so I tried to do the same but Rossi didn't allow me, he overtook me in the middle of the corner." 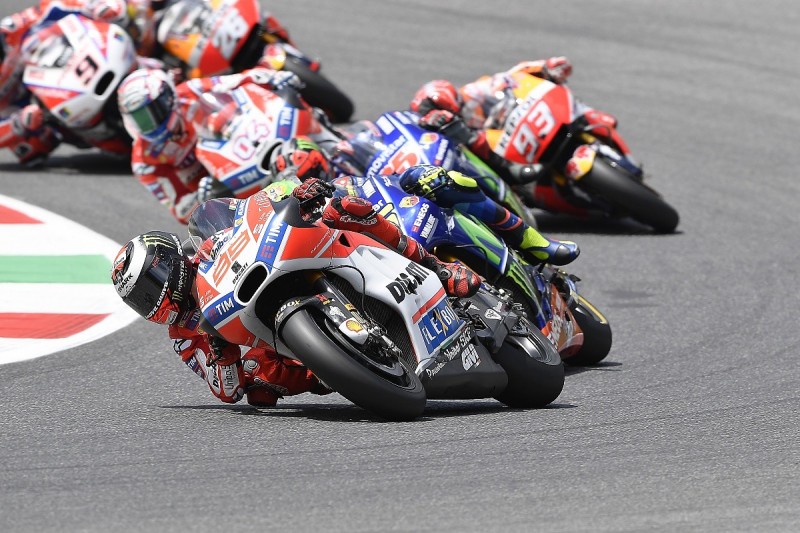 The Spaniard said being on the receiving end of moves such as Rossi's was "not usual for me", with mid-corner and braking the areas where he is still chasing time, even though a recent test at Barcelona leaves him encouraged about next weekend's race.

"I've been overtaken in the middle of the corner five or six times," Lorenzo said

"It's clearly my weak point now, this middle part of the corner that I'm very slow and too open.

"The second problem is that - even if I try everything, a lot of settings, a lot ways of riding - I still don't take profit of the strong points of the bike.

"Most of the corners I'm still trying too much to prepare for the exit, but that doesn't compensate for what I lose entering the corner.

"So riders like Dovi and Petrucci, who are hard brakers, the bike works much better for them.

"So at Barcelona, at the moment, I am the one who is more comfortable with the bike."