The Spaniard was 10th on the second day of the Buriram pre-season test, 0.760 seconds off Honda's pacesetter Marc Marquez, and was hampered by chassis issues on Saturday the morning.

"We've had some problems on the first bike this morning that was some little fissure in the chassis," said Lorenzo.

"We had to put away this bike and [when I] exited with the second bike something was broken.

"Then it was very slow, I was one second slower than in the morning.

"I still don't feel comfortable, even with a good bike I am still far from the fastest.

"But in the afternoon with the other bike, I was even worse.

"We need to understand the new bike because it has some very positive points but also some negative points."

Lorenzo previously said Ducati's 2018 bike felt much closer to his natural style at last month's Sepang test, which he ended on top with an unofficial lap record of the Malaysian circuit.

Team-mate Andrea Dovizioso trialled a new chassis and fairing during the day and ended the session one place ahead of Lorenzo.

"I'm happy about the speed we showed today but still we are working with the fairing and the chassis," said Dovizioso, who said he was still undecided about Ducati's new fairing.

"We had a chance to make a lot of work today, we understood the new fairing more and the chassis is very similar to the old one but it is very difficult to fix something big normally when you change a chassis.

"We continue to work more on the details.

"Fortunately, everything we try it works. We didn't understand very well if it is better to use the new things or not, but in any case our speed is really good." 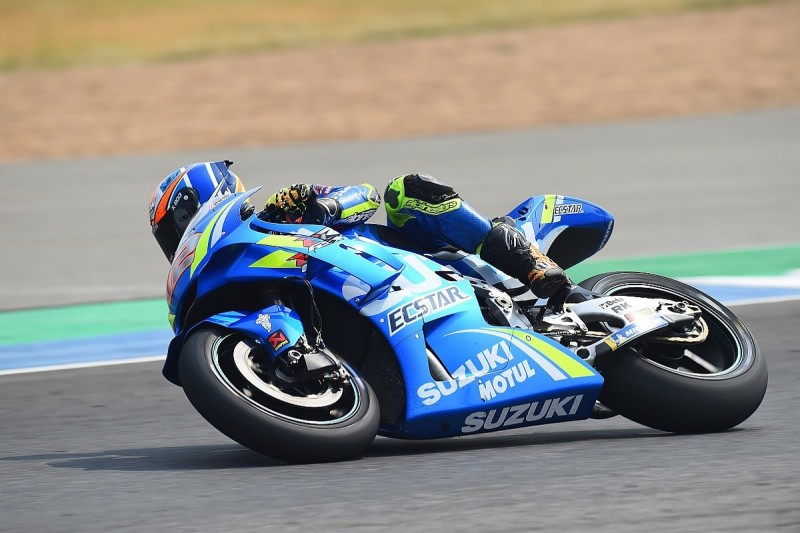 Suzuki has become the latest MotoGP manufacturer to unveil a new aerodynamic fairing design, which Alex Rins and Andrea Iannone tested on Saturday in Thailand.

The Japanese marque has spent much of pre-season testing running the version of the fairing it introduced in the second half of 2017.

Its new design is similar to the 'hammerhead' shape Ducati raced with last year, and was met with generally positive reviews by both of Suzuki's riders despite a lack of track time.

"I felt better on the wheelie," said Rins, who was seventh on day two of the test despite a fall.

"A MotoGP bike has a lot of electronics parts, and all the time the front wheel is on the floor we have more power than not on the floor. This one helps me to have more acceleration and speed."

Team-mate Iannone reverted to the older version after an early crash.

Honda also tested a new aero fairing on Saturday, with a slightly modified design compared to the one it used in Malaysia last month.