Casey Stoner would still be a MotoGP winner if he ever made a comeback, reckons Jorge Lorenzo

Double world champion Stoner retired from MotoGP aged only 27 at the end of the 2012 season.

He has remained a test rider for Honda and will return to racing for the Suzuka 8 Hours next month.

Stoner reappeared in the MotoGP paddock to demonstrate a new Honda road bike at Barcelona last weekend, and Lorenzo is convinced his former title rival is still quick enough to be a frontrunner.

"For me Casey is a real natural talent," said Lorenzo.

"I never saw a better natural talent riding a bike. It was clearly a great show watching him ride a bike, especially in Phillip Island, and he has my respect.

"If he came back some day he would be there winning and fighting for the win.

"I understand his decision to retire because racing is sometimes very stressful for us.

"It depends on your personality or way of living. It's hard but it's his decision.

"If he came back I would receive him with open arms."

Lorenzo's team-mate Valentino Rossi - who also battled for several championships with Stoner - suspects too much time has now passed since the Australian stopped racing. 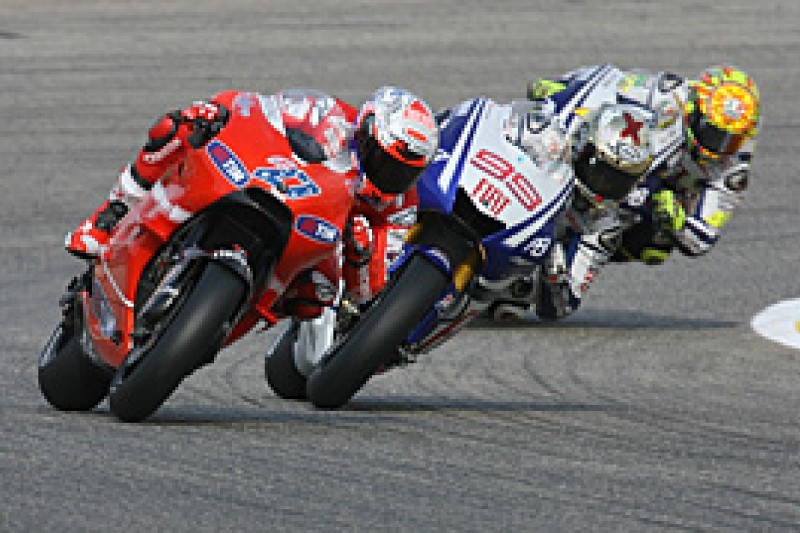 "I think we already have enough [quick riders] in this championship! For sure I'm joking but it's been quite a lot of time since Casey has raced and it doesn't make sense for him to come back," said Rossi.

"But it would be interesting to understand his level of riding without a lot of races."

Dani Pedrosa, who was Stoner's Honda team-mate in 2011-12, thinks it unlikely he will ever return to the grid.

"I've been talking to him and he looks quite comfortable in his situation," said Pedrosa.

"Of course, to watch him ride and to be one of his rivals was a great pleasure. Big respect."

Stoner and Honda discussed the possibility of him returning to MotoGP to stand in for Pedrosa during his arm surgery absence earlier this year but the Japanese marque decided against it.