Fresh from taking his first MotoGP podium as a Ducati rider at Jerez, Lorenzo gained 10 places at Le Mans to finish sixth, benefiting from late crashes for Marc Marquez and Valentino Rossi.

The first three practice sessions of the weekend had been held in wet or drying conditions, with Lorenzo admitting he did not feel safe on Friday after ending up 16th-fastest that day.

Saturday's practice four session was the first dry running of the weekend, although a crash on Lorenzo's out-lap ate into his track time, before he ended up failing to progress from Q1

"After Jerez, I was feeling curious to see how the bike reacts to this track, a positive track for Ducati in the last few years," said Lorenzo, who finished 24 seconds off race winner Maverick Vinales.

"To be honest the setting that worked in Jerez didn't work here [on Saturday] in dry conditions, we had too much wheelie. From the warm-up we had to change the set-up of the bike to avoid wheelie.

"For this reason we needed much more time. Just 40 minutes of dry conditions was not enough for me to get into the maximum I could achieve with this track and this bike.

"We finished sixth with a constant pace. Even if I finished 24s from the top guys, we saved a difficult situation.

"I'm satisfied in general, but of course I want to be much faster." 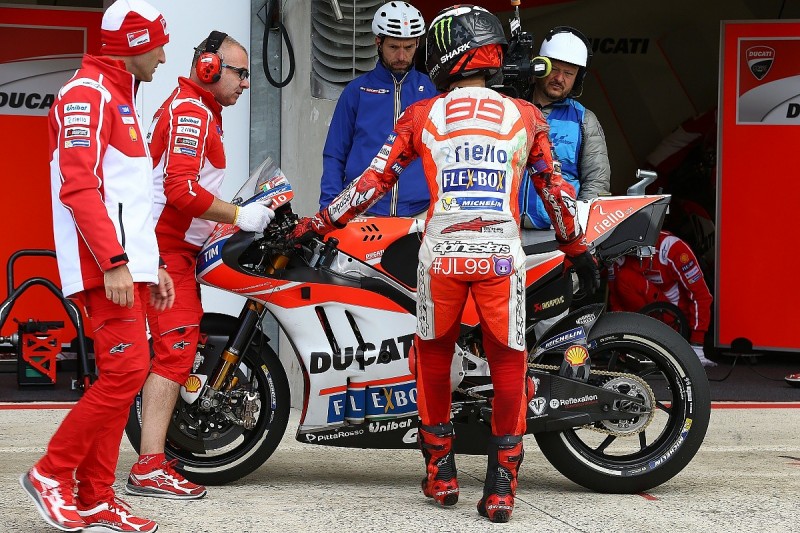 Lorenzo, who ended up two places behind teammate Andrea Dovizioso, said Ducati's private test at Barcelona on Tuesday and Wednesday will be key to unlocking the speed needed to become more a consistent challenger at the front of the field.

"[Le Mans] was one of my favourite tracks, also for good for Ducati, but we weren't able to be competitive," said Lorenzo.

"We needed some more tenths to be on the podium.

"Mugello is another good track for me and Ducati, and our home grand prix, I have a lot of expectations and it's important to get a result.

"So let's see how these two days [of testing] in Montmelo are.

"Our main problem is front grip in the middle of the corner - if we can solve that, we can make a big step forward."