Ducati’s Francesco Bagnaia topped FP3 for the MotoGP Italian Grand Prix with a new Mugello lap record as a late crash for Yamaha’s Maverick Vinales dropped him into Q1.

Pleasant conditions for the start of FP3 meant combined timesheet improvements were had almost instantly, with KTM’s Miguel Oliveira – armed with the RC16’s new chassis and fuel – jumping up to fourth overall and top in the session with a 1m46.331s early doors.

Pramac’s Johann Zarco fired in a 1m46.201s moments later to take over top spot in FP3 and move up to second on the combined times, finding a substantial six tenths on his Friday best.

His factory Ducati counterpart Bagnaia held onto top spot on the combined times based on his Friday best until the final 15 minutes of the session, when Yamaha’s Quartararo began to light up the timing screen.

The championship leader went fastest of all with a 1m45.807s, bettering this to a 1m45.701s on his following tour.

Quartararo’s charge continued with five minutes to go as he found a fraction more time to eke out his advantage at the top of the timesheets with a 1m45.613s.

Dropping to the cusp of the Q2 places as the session neared its conclusion, Bagnaia dug deep to set a new Mugello lap record of 1m45.456s to go top with just over two minutes remaining.

At the same time Yamaha’s Vinales slid off his M1 at the Correntaio right-hander at Turn 12, ending his session prematurely and putting him under pressure to actually secure a direct Q2 place for qualifying. 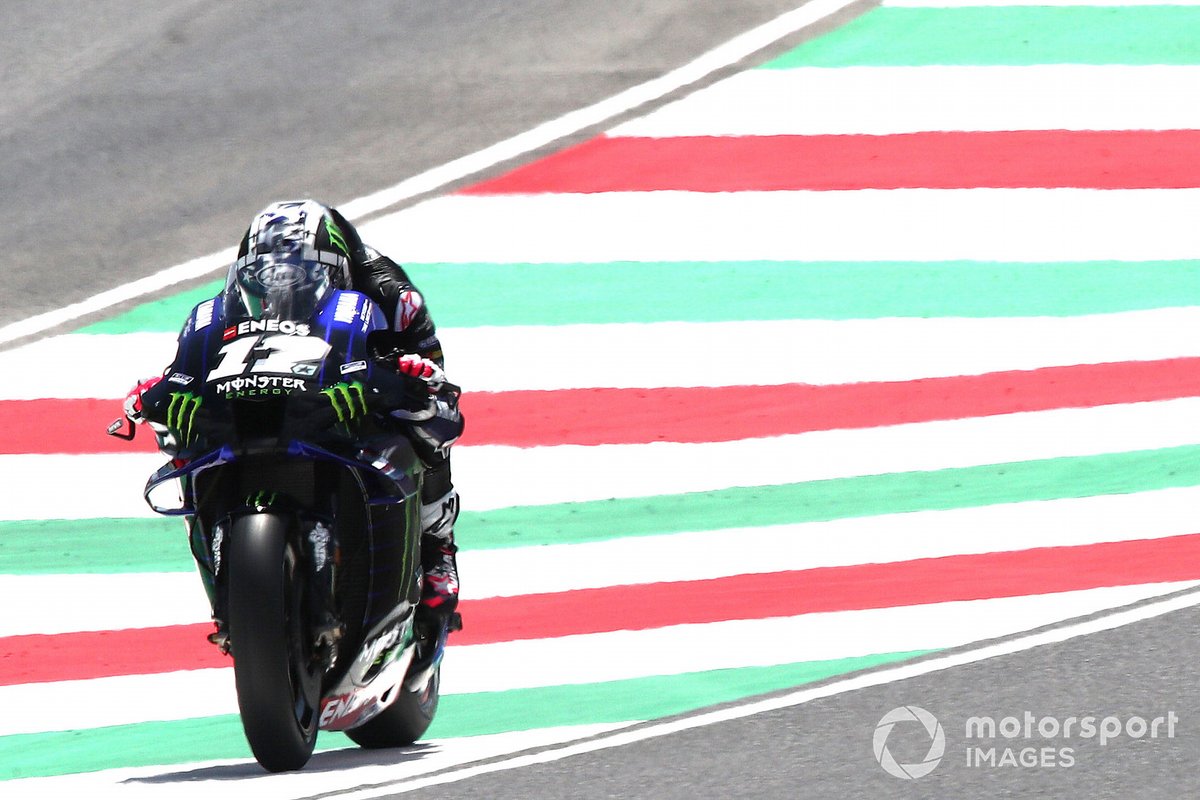 Bagnaia’s time went unchallenged at the end, the Italian heading Quartararo as KTM’s Brad Binder – who equalled MotoGP’s all-time top speed record of 362.4km/h in FP3 – jumping up to third late on.

Jack Miller on the other factory Ducati was another late improver with a 1m45.701s, as was Zarco in fifth spot.

These improvements shoved Suzuki’s Alex Rins out of the top 10 in the dying stages, but he moved to sixth with a 1m45.725s – a lap which pushed Vinales into Q1 in 11th.

Oliveira ensured both factory KTM’s have secured direct passage to Q2 this afternoon ahead of world champion Joan Mir on the Suzuki, Honda’s sole representative so far in Q2 Pol Espargaro and Franco Morbidelli on the two-year-old Petronas SRT Yamaha.

The Yamaha ruder will be joined by a struggling Marc Marquez on the Honda in Q1 later this afternoon, with Aprilia’s Aleix Espargaro – who had to have a “coke can” of fluid drained from his arm after Friday following recent arm pump surgery – slipping to 13th.

Valentino Rossi did find some pace on Saturday, but will go into Q1 having only been able to go 18th-fastest in FP3 on his SRT Yamaha with a 1m46.358s.