Pre-season testing has officially gotten underway in Malaysia ahead of the 2022 MotoGP season, with a winter’s worth of work on display at Sepang.

Saturday’s action – aside from the three-day shakedown for test riders and rookies – marked the first MotoGP running since the two-day end-of-season test at Jerez last November.

There we got a glimpse at what manufacturers had been working on behind the scenes for 2022, and it raised the question: what would become 2022’s tech battleground.

The advent of spec electronics for the whole grid in 2016, designed to level the playing field, as well as a freeze on engine development for non-concession manufacturers forced factories to explore other avenues to get the jump on their competitors.

Ducati has typically been the trendsetter in recent years, first with the introduction of its aerodynamic winglets in 2015 – which soon became widely copied before being outlawed at the end of 2016 to keep costs from spiralling. 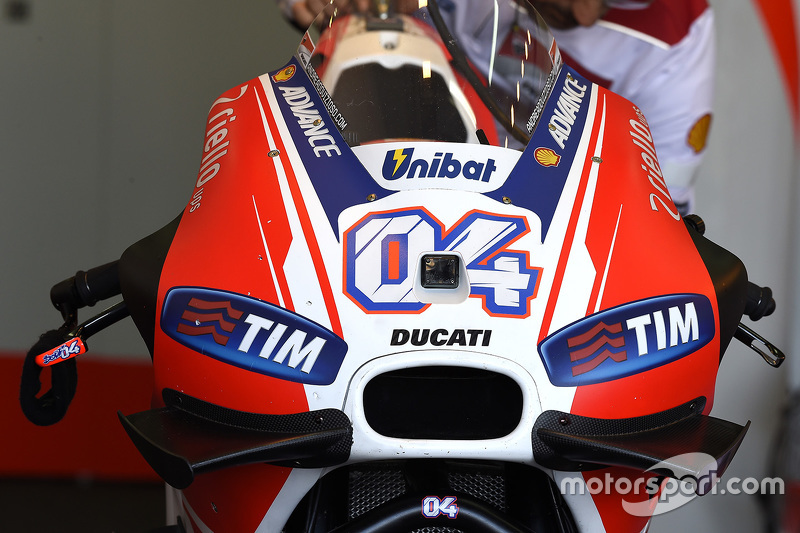 But this only led teams to develop the aerodynamic fairings we see today – though, again, the rulemakers intervened and got in front of the risk of their being a major spending war on endless aero development by limiting marques to one fairing change per year.

Then in 2018 Ducati introduced the holeshot device to MotoGP: a system that allowed a rider to mechanically (as electronically adjusting ride height is banned) lower the rear of their bike.

The idea behind this was to lower the centre of gravity for a bike, and thus stopping the front from lifting while accelerating – the same principle as the aero fairings, essentially.

Ducati developed this into a ride height device that could be activated while exiting corners, offering the same benefit.

Simply, lowering the bike with the ride height device combined with the downforce from the fairings, the less electronic intervention such as anti-wheelie is needed – and so acceleration is improved and a greater top speed is achieved on straights.

The rest of the grid slowly caught onto this and developed their own systems over the past two seasons, with front holeshot devices being added to the mix for the start. 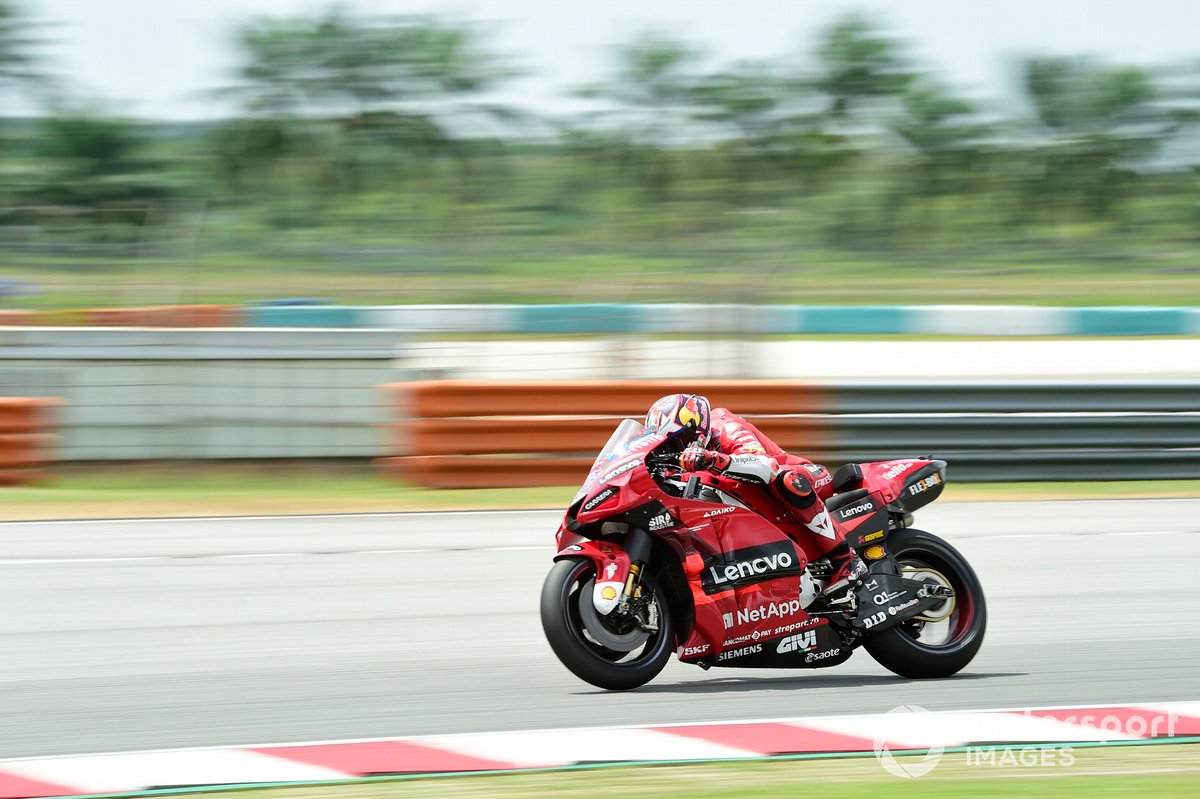 The front system worked much in the same way as it does on a supercross bike, whereby a rider forces the front forks into a catch, which will release at the first corner when braking force is applied.

The rear ride height device is also disengaged upon braking, much like a Drag Reduction System on a Formula 1 car.

But it has now come to light the Italian manufacturer has taken this a step further already by introducing a system where the front and the rear can be lowered while on a lap (pictured above).

Pramac’s Johann Zarco, though tight-lipped on the matter, revealed on Saturday: "Yes, we're working on that a bit to get it right. It takes a little time."

The principle behind this development is once again simple: Ducati is looking to find even more top speed.

It already has the most powerful engine on the grid, which Ducati general manager Gigi Dall’Igna recently suggested had been further improved, with Francesco Bagnaia setting a top speed con Saturday at Sepang of 336.4km/h - second only to Honda's Marc Marquez clocking a 337.5km/h.

Ducati's speed was matched by Aprilia’s Maverick Vinales, though it’s not clear if he set that speed on his own. However, remove this from the equation and the next fastest bike at Sepang currently was Aleix Espargaro on the sister Aprilia with 333.3km/h.

Whether Ducati’s new system is refined enough yet to be raced remains to be seen, but it may well have already debuted it in a grand prix without anyone noticing.

Its original holeshot device first appeared on the Pramac Ducati of Jack Miller from the Japanese GP in 2018, while Miller also debuted the rear ride height device on his Pramac bike in races in 2019.

Moving forward, it’s likely that this is latest technical battleground to be fought on in 2022. 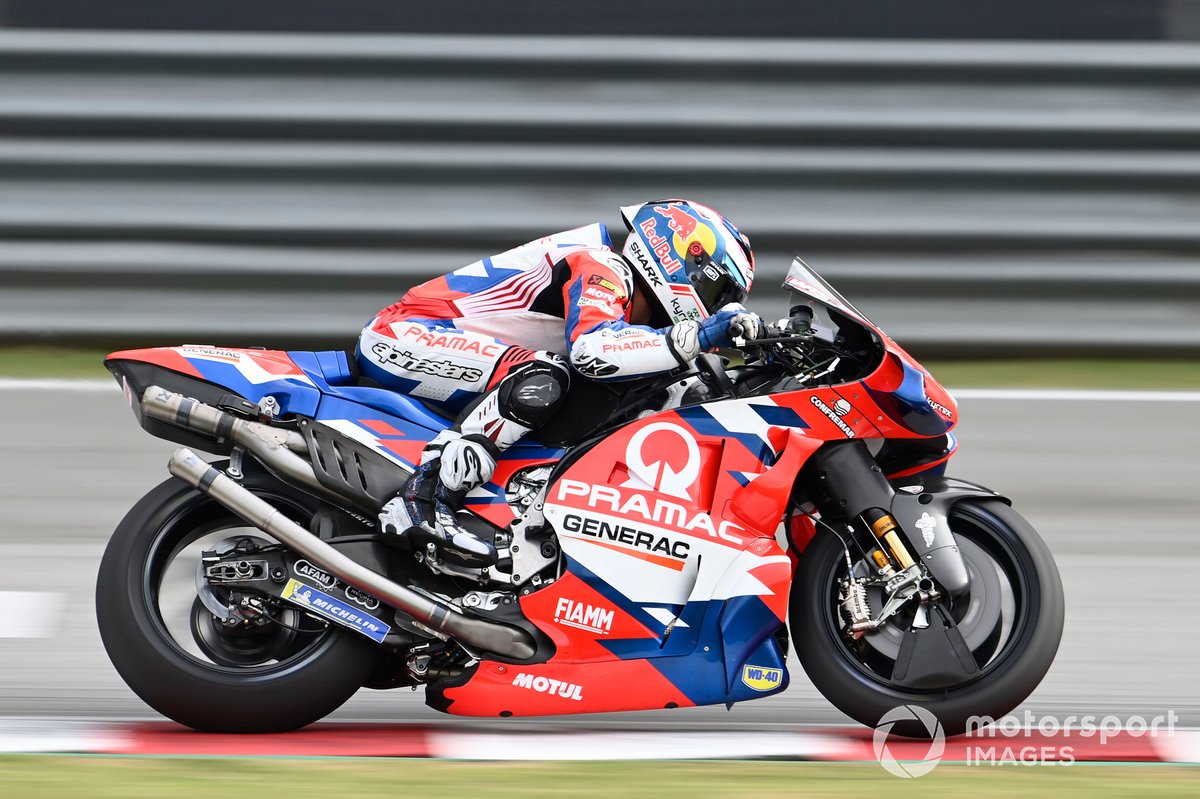 MotoGP Sepang test: How to follow, results and more