Avintia's Johann Zarco dominated a wet third practice for the MotoGP European Grand Prix, while Fabio Quartararo ended up 3.2 seconds off the pace and Valentino Rossi returned to action

The wet track meant no improvements on the combined times were made, locking the Q1 runners into place based on Friday's FP2 running.

Quartararo has made it through to Q2 after ending Friday ninth overall, but FP3 proved to be tough for the Petronas SRT rider as he continued to struggle with a lack of front-end feeling in the wet conditions.

Having finished last in the wet FP1 and 2.7s off the pace, his fortunes failed to improve as he once again ended up just 19th in the session and 3.2s slower than Zarco.

The Avintia rider took over top spot around six minutes into the session with a 1m42.985s, and traded first place with Tech3's Miguel Oliveira and Honda's Stefan Bradl in the opening stages.

With half the session gone, Oliveira on the sole Tech3 KTM this weekend returned to the top of the pile with a 1m41.519s and bettered this on his next tour with a 1m41.352s.

Zarco bested the Tech3 rider with 15 minutes remaining with a 1m41.113s, which stood as the benchmark until the closing stages when the Frenchman put his own time under immense threat.

The Avintia rider guided his GP19 to a 1m40.735s, before one final effort of 1m40.007s cemented his position at the top of the timesheets when the chequered flag came out. 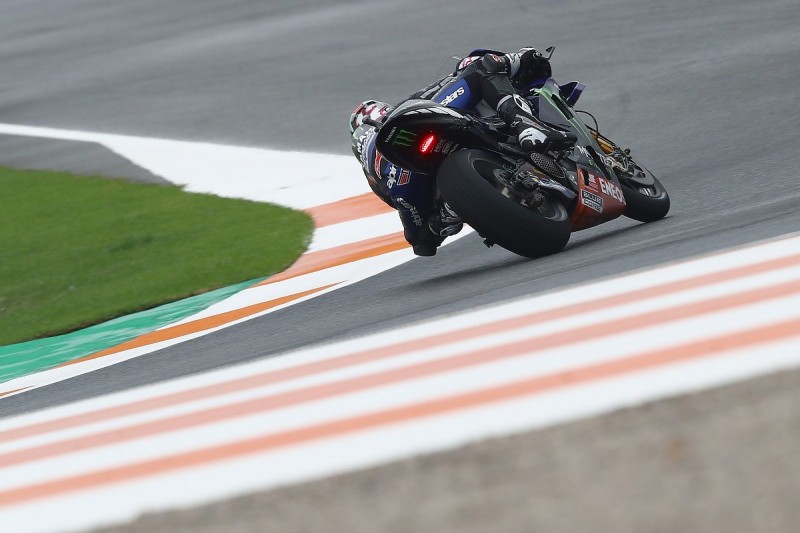 Maverick Vinales leaped up to second in the closing stages on his factory Yamaha with a 1m40.743s, but missed the Q2 cut in 11th on the combined times.

However, this is immaterial for the Yamaha rider as an engine change, which exceeds his allocation for the season, on Friday means he'll have to start Sunday's race from the pitlane.

Takaaki Nakagami was top Honda runner in third on the LCR RC213V, with Francesco Bagnaia fourth on the Pramac Ducati ahead of the sister LCR bike of Cal Crutchlow.

Only Nakagami of that trio has made it straight into Q2, with sixth-placed Oliveira and the works Honda of Alex Marquez also missing the Q2 cut.

Rossi was eighth on his first appearance since Le Mans following an enforced layoff due to COVID-19, but will face Q1 this afternoon having missed Friday's running while he awaited the results of a PCR test.

The Suzukis of Alex Rins and Joan Mir completed the top 10 in FP3, with both making it into Q2 by virtue of their FP2 times - though the latter was fortunate to be elevated to 10th on the combined times after Crutchlow had his best lap cancelled.

Fastest overall on the combined times, Pramac's Jack Miller sat out FP3 to avoid any unnecessary risk having felt strong in the conditions on Friday.

He'll go straight into Q2, as will Aprilia's Aleix Espargaro, Andrea Dovizioso (Ducati), the KTM duo of Pol Espargaro and Brad Binder and SRT's Franco Morbidelli - all of whom were outside of the top 10 in the wet FP3.

Gerloff: Rossi thanked me for looking after his Yamaha MotoGP bike