Johann Zarco led a Pramac 1-2 in a wet FP3 for the Emilia Romagna Grand Prix as both MotoGP title rivals Fabio Quartararo and Francesco Bagnaia drop into Q1.

The wet weather that affected Friday remained for the start of Saturday’s running at Misano, but it didn’t take long in FP3 for riders to begin finding good lap times to make significant improvements on the combined timesheets.

After 10 minutes Marc Marquez had made the biggest jump up to fourth overall with a 1m42.305s, with Pramac’s Zarco going fastest of all seconds later with a 1m42.275s.

From this point the timing screens lit up in red as the combined order, to determine who goes straight into this afternoon's Q2 qualifying session, continued to shuffle.

With just under 30 minutes remaining, reigning world champion Joan Mir on the Suzuki moved to the top of the pile with a 1m41.295s – but was immediately deposed by Friday pacesetter Jack Miller's factory Ducati with a 1m41.203s.

Moments later Miller’s team-mate Bagnaia took a turn leading the standings with a 1m41.160s, before KTM’s Miguel Oliveira edged clear with a 1m40.832s.

But just as soon as Oliveira had guided his RC16 to the top of the timesheets, he crashed exiting Turn 15. He walked away unscathed.

As Oliveira found his way back to pitlane for his second bike, Pramac rookie Jorge Martin shuffled him back to second with a 1m40.471s.

With six minutes remaining Zarco moved ahead of team-mate Martin by just 0.087s to take over top spot and would remain there through to the chequered flag. 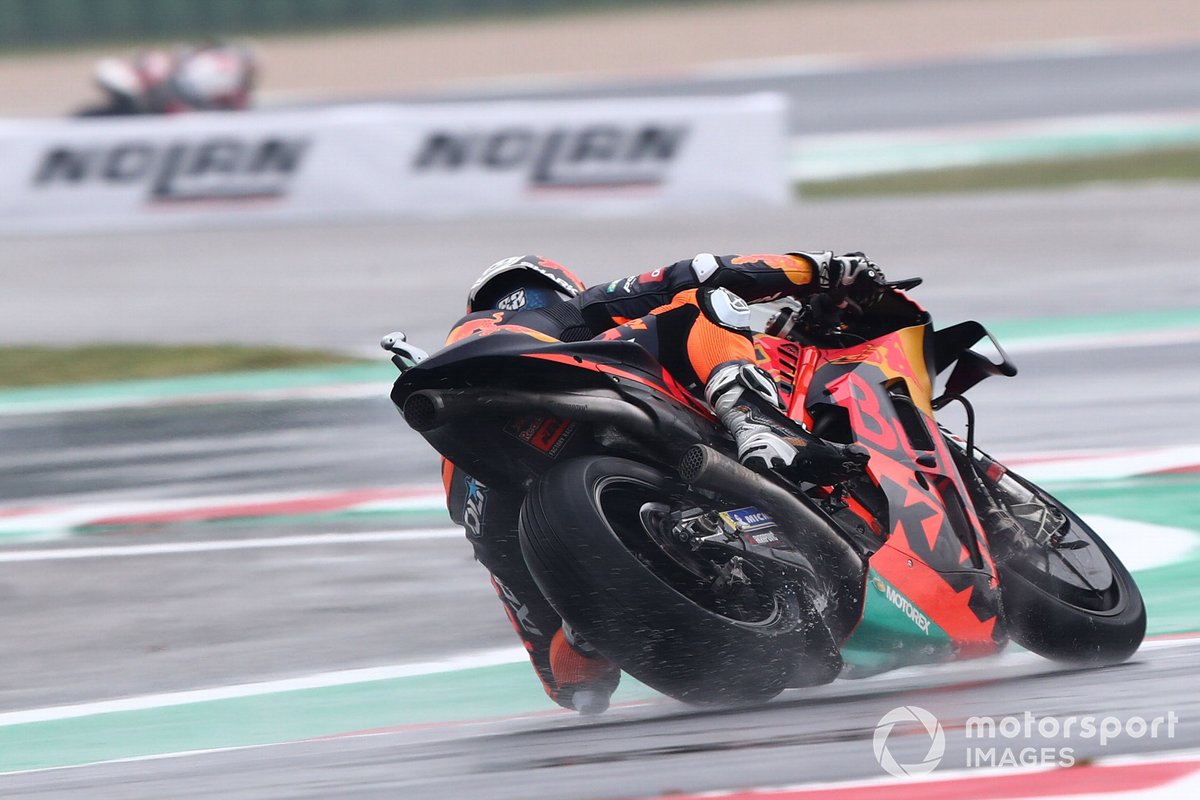 With Miller completing the top three, team-mate Bagnaia not making it directly into Q2 came as a massive shock on Saturday morning.

Quartararo’s usual wet weather woes on the Yamaha continued into FP3 and a mistake on his final lap left the frustrated Frenchman resigned to 15th in the session and his first Q1 appearance of 2021.

Bagnaia had been dropped into the danger zone as the chequered flag came out, though looked like he was putting together a lap that would sneak him into Q2.

However, the Ducati rider could only muster a 1m41.121s that was good enough for 11th, putting both title contenders into Q1.

Despite his crash, Oliveira eased into Q2 in fourth ahead of the factory Honda duo of Marc Marquez and Pol Espargaro, with Franco Morbidelli the only Yamaha currently in Q2 in seventh.

Aprilia’s Aleix Espargaro leaped up from outside of the top 20 to eighth at the end to head Tech3’s Danilo Petrucci, while Avintia rookie Luca Marini on the two-year-old Ducati rubbed salt into Bagnaia’s wounds with 10th.

Joining Bagnaia and Quartararo in a volatile Q1 session will be Mir, who was shuffled back to 12th in the end, with the likes of Brad Binder (KTM), Aprilia’s Maverick Vinales, San Marino GP podium-finisher Enea Bastianini (Avintia) and Suzuki’s Alex Rins after an early crash.

Both Petronas SRT Yamaha riders of Andrea Dovizioso and Valentino Rossi will also go through Q1 as they struggled in the conditions to 22nd and 23rd, ahead of Aprilia wildcard Lorenzo Savadori, who had a heavy crash at Turn 1 at the start of FP3.

Savadori has been declared unfit to continue, due to a right collarbone fracture.