Iannone and Dovizioso started on the third and fourth rows of the grid, and Iannone made particularly strong progress to join and then move through the five-rider fight for second place behind victor Maverick Vinales.

However, one lap after taking second place and with six remaining, Iannone crashed at Luffield, which he said in part was due to issues with his right arm.

In his first season in MotoGP in 2013, Iannone had an operation to rectify arm-pump issues, and Silverstone was the first recurrence.

"After five or six laps I had a little bit of pain, but I controlled everything, I had power," he said.

"But from the ninth lap it was out of control, I was riding with only the left arm which is a big problem with the change of direction in the braking points.

"I didn't have stability, which is very difficult.

Moving to Suzuki in 2017 to replace the Yamaha-bound Vinales, Iannone could take positives from his own speed and said he was "happy" with his future employer's success.

"In the last three or four races Suzuki improve a little bit," he said.

"The positive point is I was not pushing 100%, I pushed at 80% and controlled everything and I had a good head in this moment.

"And I'm very happy because I arrived in the race in a good way, I overtook in the correct moments.

"I think it was a very good race apart from the last part." 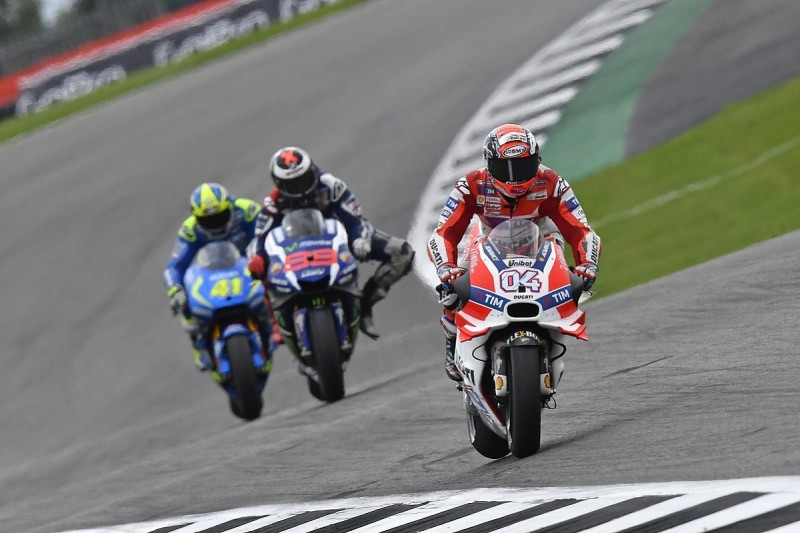 Dovizioso came into the weekend nursing a knee injury sustained in a testing crash at Misano last month and appeared to tweak the leg in a crash during qualifying.

While that was not a problem on his way to sixth place, just behind the pack fighting for second, he also suffered pump in his right arm.

"I had to use too much energy and I couldn't move in a smooth way," he said.

"I lost completely the power on the right hand before the middle of race, so it was very difficult to finish.

"I was able to catch them with this problem, but when I was up there I didn't have any more power to try to fight with them.

"Very disappointing because at that time the bike was quite good, so I am in that situation because the bike is still not easy to ride, but with the speed I was able to fight for a podium.

"But I didn't have any more energy, so I'm disappointed because the second position wasn't far away."