The 2007 and '11 world champion has rejoined Ducati in a test and ambassadorial role, leaving Honda after a five-year association that began with his final two seasons of racing.

Stoner covered 54 laps and set a best time of 2m02.1s, seven tenths of a second off the fastest Ducati race lap of the 2015 GP at the track.

"I wasn't too sure what to expect but everybody has been fantastic, welcoming me and working with me to try and get the best out of myself and this bike," said Stoner, whose test will continue on Sunday.

"It was a very productive first day, we got comfortable with the bike and the tyres a lot more quickly than I thought I would.

"We've got a lot of things to test and get myself a little bit more acquainted with the bike but generally I'm very happy.

"I'm pretty happy and surprised with my laptime to be honest, hopefully the next day we can be a bit more comfortable after sleeping on it."

The test was Stoner's first run on a Ducati since his final race with the team at Valencia in 2010, his first test of a MotoGP bike since a Honda session a year ago, and also marked his return to action following after the injuries he suffered in last season's Suzuka 8 Hours.

"I need some time to get back to speed and get the feeling back, because I haven't ridden a MotoGP bike for one year and any bike at all for six months," he said.

Ducati and Stoner have so far played down the possibility of any race appearances, and the Australian said his priority for now was to support frontline riders Andrea Iannone and Andrea Dovizioso.

"The Desmosedici GP has a lot of potential," he said.

"Hopefully we can give the right input and help the two Andreas to try and achieve something great this year."

Ducati test rider Michele Pirro was also in action, having a brief run with the team's 2016 design.

"Today I only did a few laps because the schedule only included a test of electronic components followed by one for fuel economy, so once I had finished my work, the team concentrated on Casey's debut," he said.

The first full-field MotoGP test of 2016 begins at Sepang on Monday. 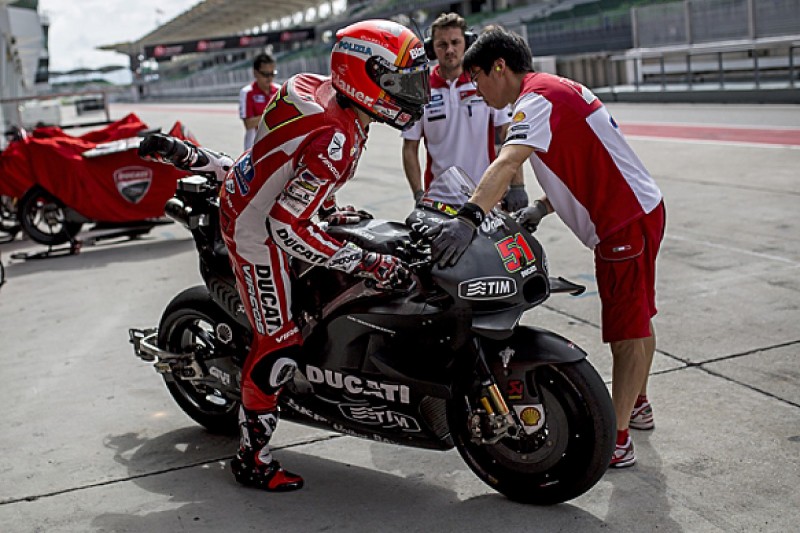