Yamaha’s Maverick Vinales was fastest in a rain-affected second practice for the Dutch Grand Prix, while Honda MotoGP rider Marc Marquez walked away from a massive crash.

Spots of rain which appeared for the end the second Moto3 practice of the day had abated when MotoGP hit the resurfaced Assen track for its FP2 session.

Honda’s Pol Espargaro set the early pace at a 1m34.514s before championship leader Fabio Quartararo moved ahead with a 1m33.491s on his factory Yamaha.

After a low-key showing in FP1, KTM’s Miguel Oliveira made a quicker start to FP2 when he took over top spot briefly with a 1m33.400s 10 minutes into the session.

With light rain beginning to fall just over 15 minutes into the session, Vinales’ time would go unchallenged. 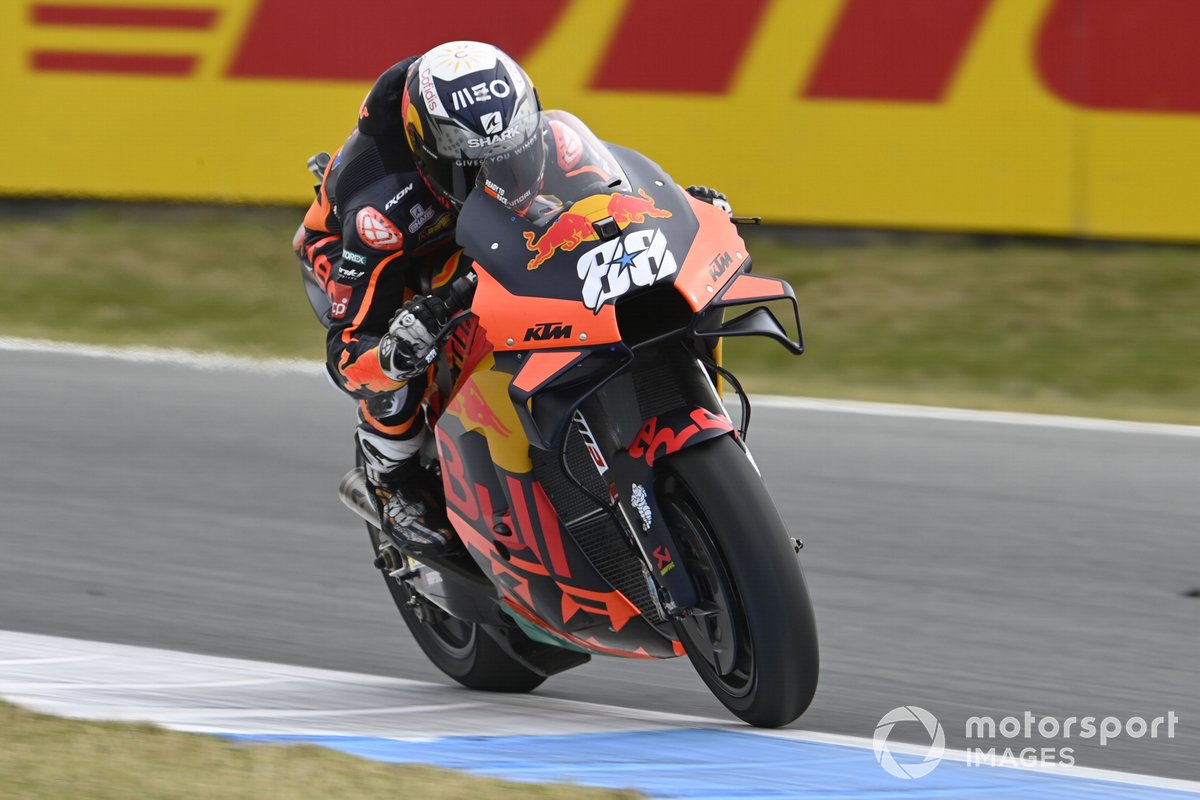 Before the track fell quiet as the rain intensified, there was a dramatic moment for Marquez when he suffered a monster off-throttle highside at the Dulkersloot right-hander at Turn 11.

The six-time world champion landed heavily on his knees and whacked his right forearm in the initial impact, but was able to walk away from the crash and make it back to his Honda garage.

He wouldn’t return to the circuit in the latter stages when most of the field elected to put in some wet running.

The track fell silent for over 15 minutes courtesy of the rain, but the track became wet enough to warrant some running, with Suzuki’s Alex Rins biting the bullet and becoming the first rider to test the conditions.

All but Honda’s Pol Espargaro – who had a slow tumble exiting the Strubben Turn 5 hairpin just after team-mate Marquez crashed – Aprilia’s Aleix Espargaro and the factory Ducati pair Jack Miller and Francesco Bagnaia put in some wet laps in the latter stages of FP2.

Trailing Vinales in the session was Oliveira, whose lap is currently good enough for a provisional Q2 place with rain threatening Saturday’s FP3 session.

Rins was seventh at the chequered flag ahead of Miller and the Espargaro brothers, with Aleix on the Aprilia leading Pol to round out the top 10.

Miller currently doesn’t have a place in Q2, with Danilo Petrucci on the Tech3 KTM 10th on combined times courtesy of his FP1 time despite ending FP2 in 11th ahead of Pramac rookie Jorge Martin.

Brad Binder was 17th in FP2 as his learning of the Assen circuit on his KTM MotoGP bike was stunted by the rain, the South African ahead of Petronas SRT’s Valentino Rossi in 18th.

Bagnaia was a low-key seventh having completed just seven laps in FP2, while Franco Morbidelli’s injury stand-in Garrett Gerloff was 21st on the ‘A-spec’ SRT M1 ahead of Avintia rookie Luca Marini.