The MotoGP rookie overcame flying laps from Marc Marquez, Danilo Petrucci and Valentino Rossi with a 1m46.141s to secure the top spot in only his eighth MotoGP appearance.

It marks the satellite Tech3 outfit's first pole since Cal Crutchlow topped qualifying at Brno in 2013.

Marquez looked like he had done enough when he took the chequered flag with a 1m46.206s, but Zarco, who had not featured in the pole fight up to this point, managed to pip him to the post with a time 0.065 seconds faster.

Pramac Ducati rider Petrucci was the pacesetter for the majority of Q2, and with five minutes to go, was more than half a second clear of the pack with a best time of 1m47.176s.

His time was bettered by Honda's Marquez with three minutes left on the clock, as the reigning champion set a 1m46.847s. Petrucci retaliated with a 1m46.526s to take back the top spot shortly afterwards.

Petrucci was forced to settle for the final spot on the front row, 0.385s slower than Zarco, while Rossi dropped to fourth on the factory Yamaha, 0.564s off pole. 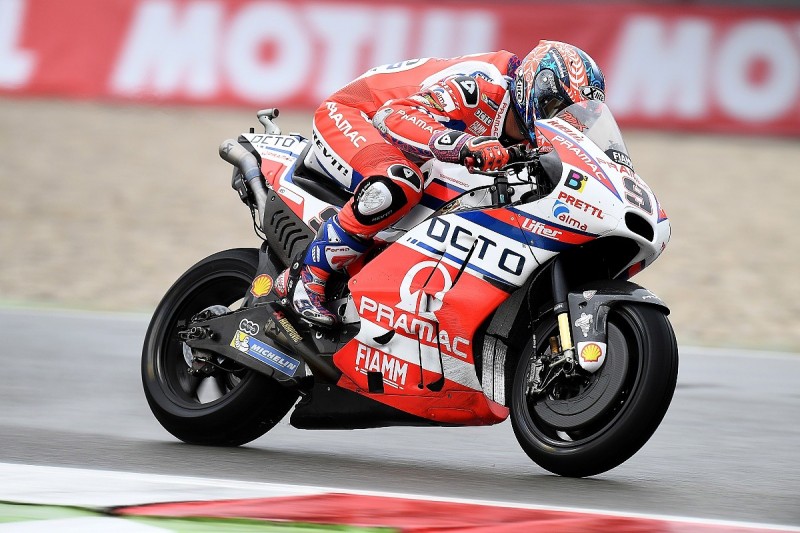 Q1 pacesetter Scott Redding crashed at the final chicane in the second session, but managed to sprint back to the pits and use his second bike to take fifth.

Jonas Folger made it two Tech3 bikes in the top six, ahead of Alvaro Bautista's Aspar Ducati, Cal Crutchlow's LCR Honda and Andrea Dovizioso, who crashed his Ducati in the early part of Q2 at the Turn 8 kink.

Sam Lowes made it out of Q1 to secure 10th on the grid for Aprilia, despite suffering an engine blow-up in the second segment.

Championship leader Maverick Vinales and Honda's Dani Pedrosa made up the top 12 after subdued sessions.

Narrowly missing out on a spot in Q2 was 2016 Dutch TT winner Jack Miller, who starts in 13th ahead of Loris Baz and Aleix Espargaro.

Jorge Lorenzo endured a dismal qualifying, the factory Ducati rider mired in Q1 and lapping 1.293s off the pace set by Redding - putting him 21st on the grid, ahead only of Bradley Smith's KTM and Tito Rabat's Marc VDS Honda.

Andrea Iannone's final lap time was good enough for third in Q1 but was deleted, dropping him down to 16th on the grid, one place ahead of Suzuki team-mate Alex Rins.