Fabio Quartararo dominated the MotoGP Dutch Grand Prix to head a Yamaha 1-2 ahead of Maverick Vinales after an early battle with Francesco Bagnaia on the Ducati.

All the talk ahead of the Dutch TT centred on Vinales, who is sensationally considering quitting Yamaha at the end of 2021 to take up a seat with Aprilia as the relationship between the Spaniard and his team has deteriorated this season.

Poleman Vinales got a good launch off the line but had his nose chopped by team-mate Quartararo, who grabbed the holeshot into Turn 1 as Vinales dropped behind Ducati’s Francesco Bagnaia, Takaaki Nakagami on the LCR Honda and Suzuki’s Alex Rins.

Bagnaia nudged Quartararo as he attempted a move up the inside of the Stekkenwal right-hander at Turn 8, but the Yamaha rider held firm as both he and Bagnaia and Nakagami jostled for the lead.

Quartararo made a mistake at the next corner and let Bagnaia through, while Vinales had found a way through on Rins into fourth.

Rins’ hopes of a podium were dashed on lap two at the Mandeven right-hander at Turn 10 when an aggressive move from Johann Zarco sent the Suzuki rider into the gravel – an incident that was investigated but went unpunished.

Quartararo attempted to retake the lead from Bagnaia into the Geert Timmer chicane at the end of the third lap but was immediately deposed by the speed of the Ducati into Turn 1.

This happened again two tours later, Quartararo unable to utilise the corner speed of his Yamaha in the final two sectors to pick off the Ducati in the early stages. 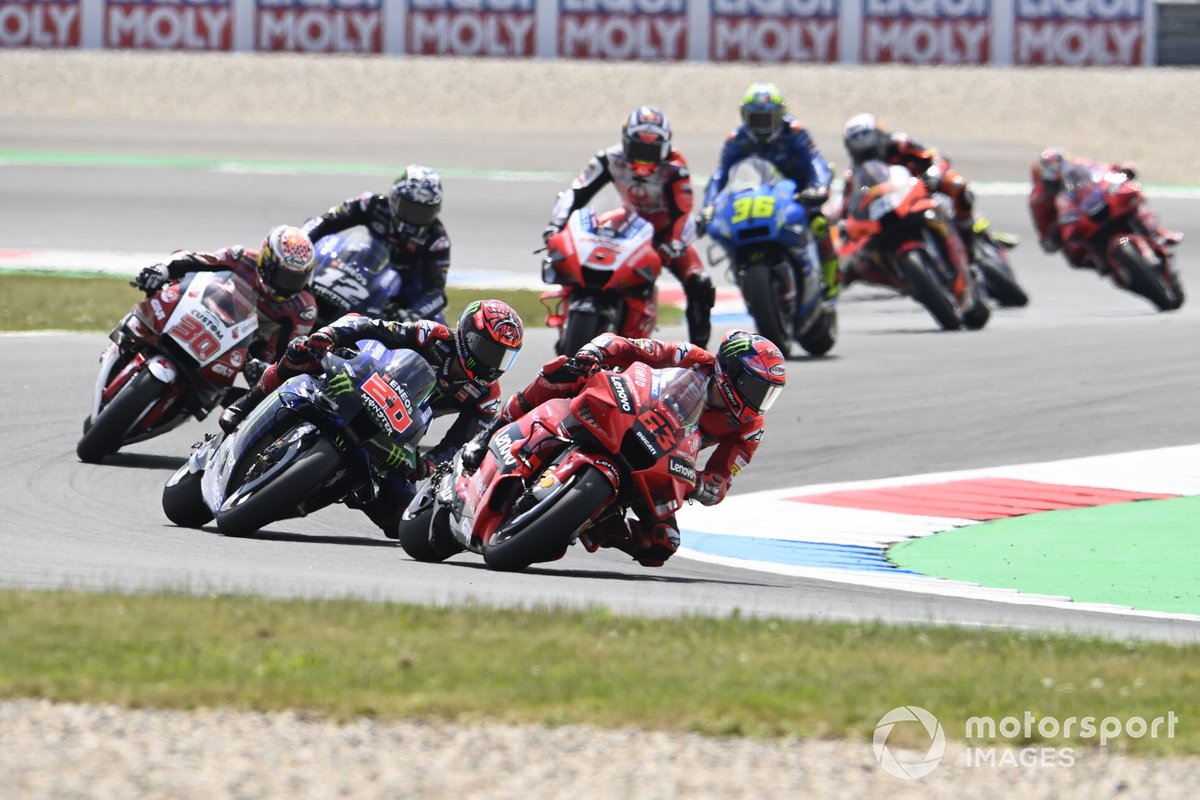 Quartararo finally made a move stick through the Meeuwenmeer kink at Turn 11 and immediately opened up a lead of six tenths over the Ducati on lap six.

Now able to run his own rhythm, Quartararo quickly got that gap up to over a second with a run of searing laps, with the Yamaha rider going three seconds clear by the start of lap 12.

Quartararo continued to open up his advantage as the battle for the victory became his to lose, while Bagnaia put up a resilient defence of second against Nakagami and Vinales.

Nakagami’s attempts at taking second on laps 11 and 13 were immediately countered by Bagnaia, who simply out-dragged the LCR rider into Turn 1 on both occasions.

But Bagnaia had been exceeding track limits too many times in his attempts to hold second and was slapped with a long lap penalty, which he served on lap 15.

This dropped him down to eighth while Vinales had taken third from Nakagami at the Ramshoek section on lap 14, with Bagnaia’s penalty promoting him to second.

Zarco followed Vinales through on Nakagami at the end of the same tour, with the Yamaha rider beginning to ease away and take some time out of his team-mate’s lead.

Though the gap would come down to 2.4s on the final lap, Quartararo was simply managing his lead and came under no real threat through to the chequered flag to secure his fourth win of the 2021 season.

Vinales put 3.003s between himself and the Suzuki of Joan Mir, who worked his way through from 10th on the grid to beat Zarco late on to secure his third podium of the year. 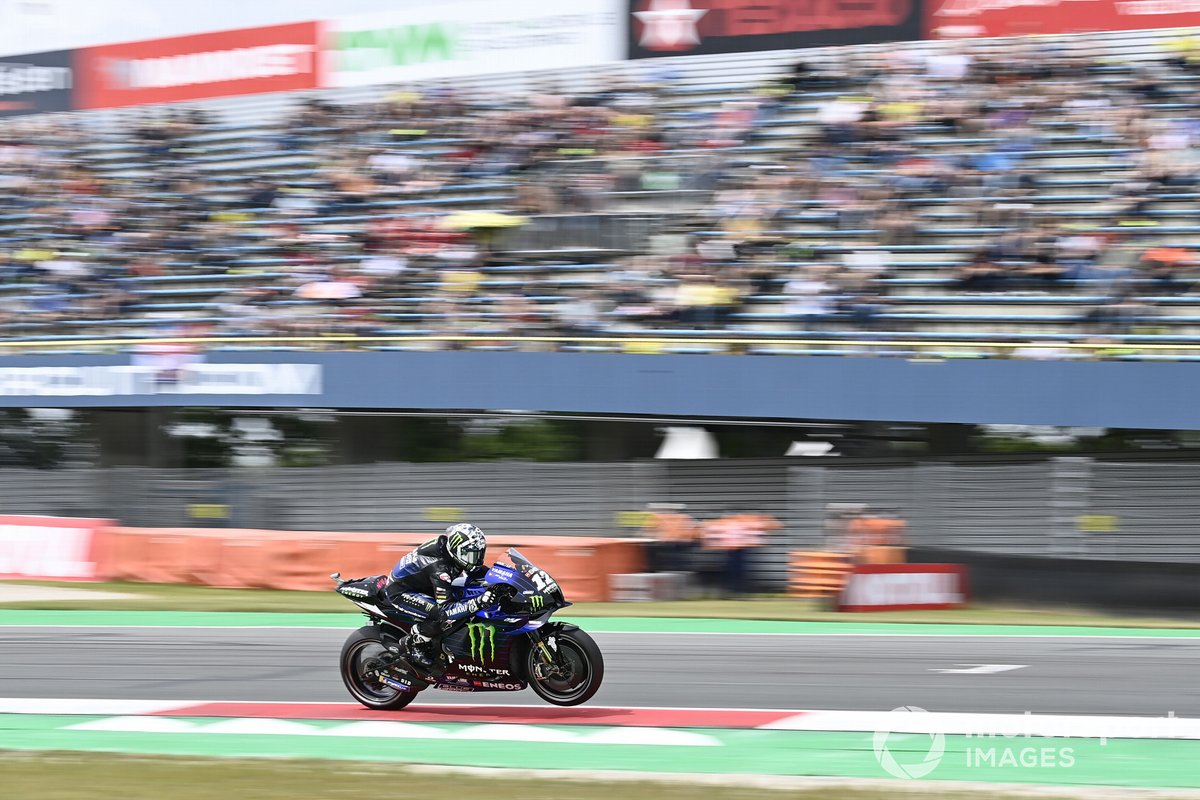 KTM’s Miguel Oliveira completed the top five ahead of Bagnaia, who prevailed in a tight battle with Marc Marquez – who came from 20th on his factory Honda – and Aprilia’s Aleix Espargaro.

Nakagami faded dramatically out of the podium battle when he was passed by Vinales and Zarco and ended up ninth, ahead of the second works team Honda of Pol Espargaro.

Rins came from last to 11th after his earlier collision with Zarco, while Brad Binder recovered to 12th on the KTM having started 21st.

Danilo Petrucci was the sole Tech3 KTM at the chequered flag in 13th after team-mate Iker Lecuona crashed late on, with Alex Marquez (LCR Honda) and Avintia’s Enea Bastianini taking the final points-paying positions in 14th and 15th.

Garrett Gerloff beat Luca Marini (Avintia) on his MotoGP race debut as Franco Morbidelli’s injury stand-in at Petronas SRT in 17th behind Aprilia’s Lorenzo Savadori, while SRT team-mate Valentino Rossi had a fast crash on lap eight after a woeful start dropped him from 12th to 21st.

Pramac’s Jorge Martin pulled out of the race, while Ducati counterpart Jack Miller’s championship hopes took a knock with a late tumble.

Quartararo’s championship lead now stands at 34 over Zarco, with Bagnaia 47 adrift ahead of Mir a further eight points back.