The Italian lined up 12th for his second race on Suzuki's GSX-RR but crept slightly just before the lights went out, and was handed a ride-through that dropped him from 10th to a distant last.

Iannone insists he "did not start early" or benefit from it and feels that should have been taken into account by stewards, especially as he was also tagged by Jorge Lorenzo at the first corner.

"I got a ride-through penalty and my feeling is that it was too harsh," he said.

"In my opinion I didn't gain any advantage because I just moved a bit but then immediately stopped.

"On the contrary, I also got hit by another rider at Turn 1, causing me to lose many positions.

"Because of this, my opinion is that the race direction could have given another evaluation of the situation, and maybe not dictate such a penalising ride through."

He believes a relaxation of MotoGP's jump-start rules in 2015 - from penalising any movement to leaving it to stewards' discretion if a rider stops before the lights go out - should have come into play.

"I only moved when I put the bike in first gear, and the decision was to penalise me," he said.

"It changed and if you move but don't improve the position, or don't have an advantage, the stewards look if they will penalise you or not." 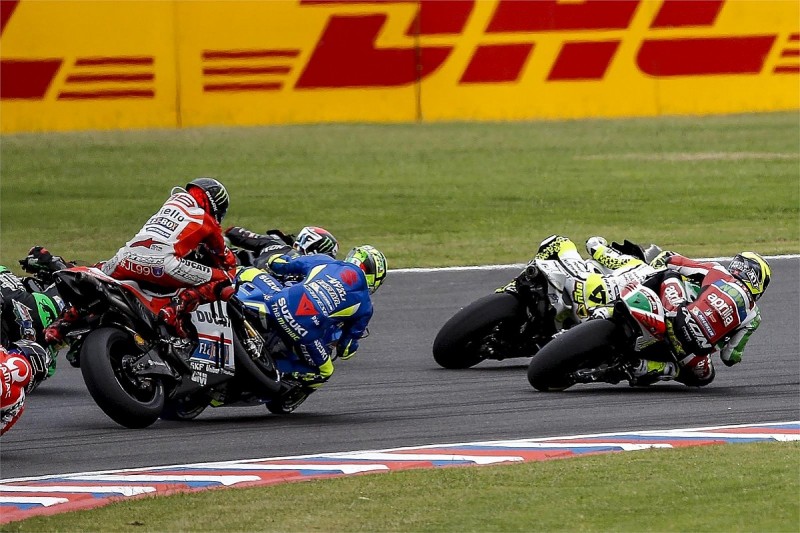 Iannone ultimately finished as the last runner, in 16th place, but feels he had the speed to contend for the top five without the penalty and the contact from Lorenzo that "affected my whole race".

That means he is still yet to score a point for Suzuki, which he has joined after three seasons with Ducati, while rookie team-mate Alex Rins retired after knocking his already-injured ankle in a crash.

"I think I had a very good pace," Iannone said.

"Not for fighting for the podium, but for fourth, fifth position it would have been possible to fight.

"It's a very good performance for us. On the first corner I lost too much because Jorge touched me, it very strong, and I don't know why I didn't crash. I'm very lucky.

"But, OK, this is the first two races of the season, I think from the third race everything [bad] finishes and starts the summer for us."