Argentina MotoGP: Marc Marquez fastest for Honda in practice one

Marquez was the first rider to dip into the 1m40s at the Termas de Rio Hondo track, and early on in the 45-minute session he enjoyed a one-second buffer over the opposition.

That was eroded in the latter stages, but the Honda rider was always able to stay a step ahead of his rivals - setting two times good enough to top the session.

Cal Crutchlow (LCR Honda) briefly went second-quickest in the final five minutes but was beaten to the runner-up spot by Miller by just 0.035s. 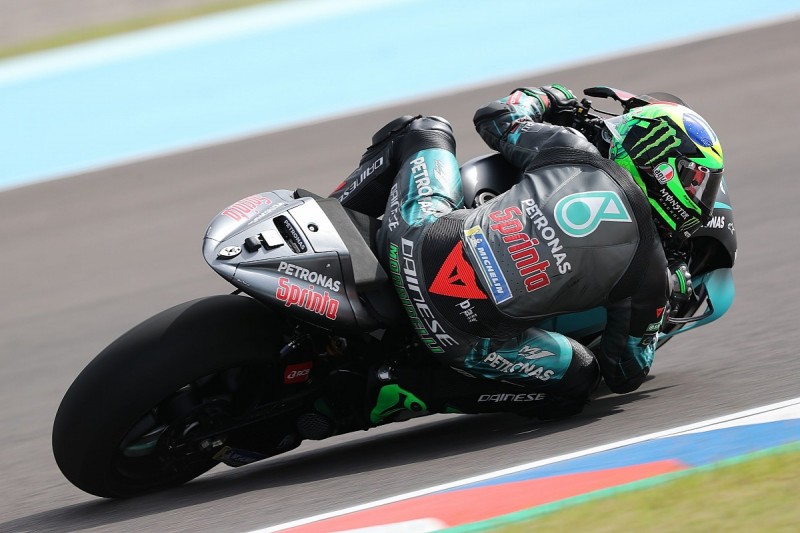 Best of the Yamahas was Petronas SRT rider Franco Morbidelli, 0.492s off the pace in fourth, while Aprilia's Andrea Iannone and KTM's Johann Zarco both posted times within six tenths of Marquez to complete the top six.

Qatar winner Andrea Dovizioso was seventh on the best of the works Ducatis, followed by Fabio Quartararo (Petronas), top Suzuki man Alex Rins and factory Yamaha rider Valentino Rossi, who completed the top 10 with a time exactly one second slower than Marquez.

Jorge Lorenzo had a low-key start to the Termas weekend with 14th place 1.513s adrift, as he recovers from injuries sustained earlier this month at Losail.

Maverick Vinales also had an indifferent session, albeit having said he would use it trying to practice overtaking rivals rather than focusing on outright pace.

Works Ducati rider Danilo Petrucci was one of two riders to crash at Turn 1 - the other being Suzuki's Joan Mir - and consequently ended up down in 20th, ahead of only Pramac's Francesco Bagnaia and Tech3 KTM rider Hafizh Syahrin.