After his victory on home turf at Mugello last weekend, Dovizioso became the first Ducati rider since 2010 to score two successive wins as he triumphed in Barcelona.

The Italian ran second for the first half of the race behind Dani Pedrosa's Honda before making his move with 10 laps to go and then pulling away in a race marked by high temperatures and extreme tyre wear.

Dovizioso, who ultimately won by 3.5 seconds in front Marc Marquez, described the win as "strange" because - unlike his Mugello triumph - it was a result of managing his pace over the 25-lap race rather than an outright speed advantage.

The 31-year-old pointed out that the Ducati still suffers from the same limitations as it has done throughout the early stages of the 2017 campaign in relation to turning and mid-corner speed.

"I don't want to complain in this moment, but still we have to improve the same things," said Dovizioso.

"Mugello is a good track for us, also last year and the year before.

"It's a different story, and we were fastest this year, but today was a strange race, it wasn't about the speed.

"Nobody could push because the tyre didn't have grip, and I have an advantage on the straight because my engine is stronger.

"So it's not the reality, I believe, unfortunately.

"We still need something different in a few areas, the turning is the same limit as four races ago.

"I don't want to speak in a negative way, but I'm realistic." 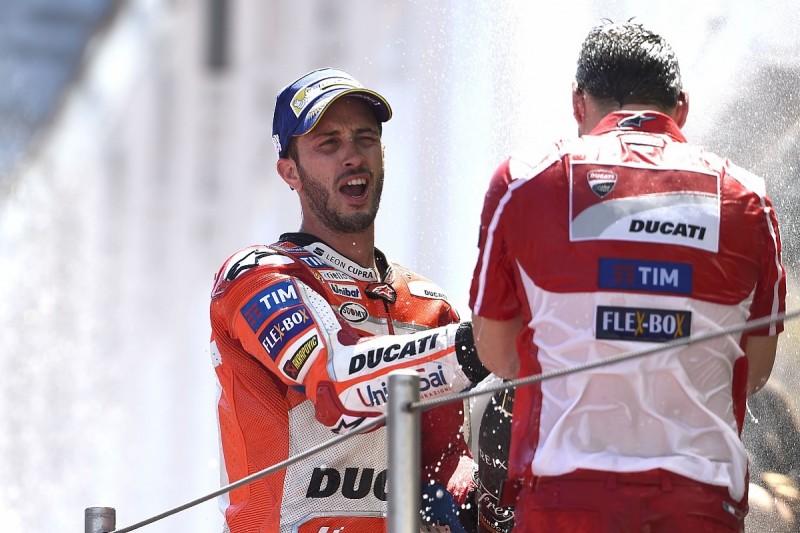 Dovizioso's wins have moved him up to second in the championship standings, only seven points behind Yamaha's Maverick Vinales, who had a subdued run to 10th at Barcelona.

But Dovizioso urged his Ducati team to focus on fixing the Desmosedici bike's remaining weaknesses, rather than getting fixated on the small gap between him and the top of the points table.

"If we want to fight for the championship, like we said [we're aiming for] before the season, we have to improve some things to be competitive," he added.

"In some races we took 25 seconds [to the leaders] this year.

"You can't fight for the championship like this, because the competitors are too strong, both the bikes and the riders.

"I'm realistic about that, I'm not too excited now.

"We still miss something, we have to be focused on that, not look at the championship and being seven points behind the leader."