Bagnaia scored pole in the Aragon and San Marino GPs, after which he converted to victories, and will be aiming for a hat-trick of wins after blitzing the field by 0.348 seconds in qualifying at the Circuit of the Americas.

Pramac rookie Jorge Martin got his hooks into the back of COTA pole king Marc Marquez and set the initial pace on his Ducati at the start of Q2 with a 2m03.278s.

This put him 0.330 seconds clear of Marquez, though the Honda rider retaliated on his following flying lap to take over provisional pole with a 2m03.209s.

After the first run, just 0.090s covered the front row of Marquez, Martin and the LCR Honda of Takaaki Nakagami.

Marquez’s lap would remain the benchmark until the final 30s of the session, when Bagnaia smashed his opposition with a 2m02.781s lap.

Title rival Quartararo put this under pressure through the first sector of his final lap, but couldn’t hook it together and remained second on his factory Yamaha courtesy of his previous 2m03.129s to secure his 14th front row of 2021.

Marquez has been on pole at COTA every year since it came onto the calendar in 2013, but ended his streak after qualifying third for Sunday’s race.

However, it marks his first front row since the 2020 Spanish GP.

Martin will head the second row ahead of Nakagami and Zarco, while Alex Rins leads Suzuki team-mate Joan Mir in seventh. 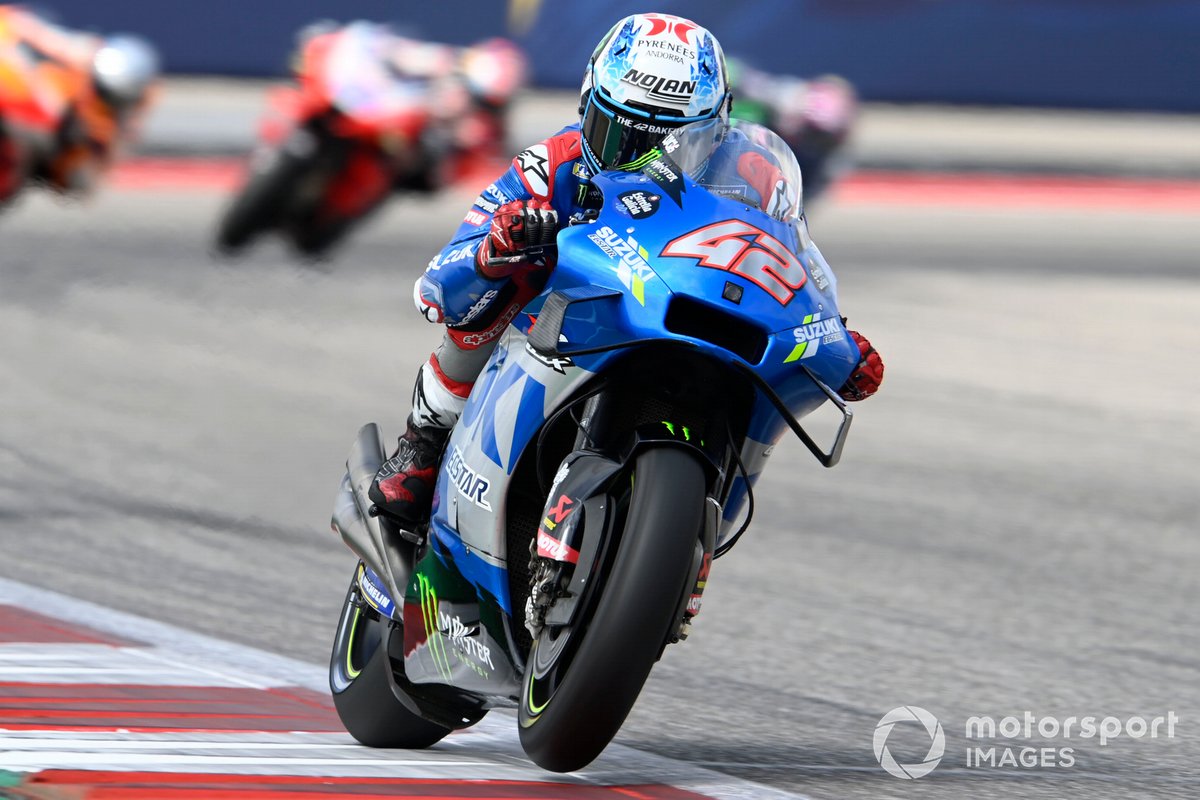 Mir had to come through Q1 and was only left with one bike to complete qualifying with after he suffered an engine failure at the start of the preceding FP4 session.

The Suzuki rider followed Avintia rookie Luca Marini through Q1, the Italian putting his two-year-old Ducati ninth on the grid ahead of a furious Jack Miller.

The Ducati rider annihilated the field in FP3 but could only manage 10th ahead of KTM’s Brad Binder and the sister factory Honda of Pol Espargaro.

Yamaha’s Franco Morbidelli will line up 13th for his second outing in factory colours, while his Petronas SRT replacement Andrea Dovizioso mounted a strong charge for 14th at the end of Q1.

Both riders were left stranded in 18th and 19th as a result, with Valentino Rossi also unable to improve on 20th after sliding off his SRT M1 at Turn 6 at the end of the Q1 session.

Danilo Petrucci completed the shortened 21-rider field on his Tech3 KTM, with Aprilia’s Maverick Vinales a non-starter this weekend following the tragic death of his 15-year-old cousin Dean Berta Vinales in a World Superport 300 accident at Jerez last week.