Nicky Hayden, the 2006 world champion, will leave MotoGP for the World Superbike Championship with Ten Kate Honda in 2016 after a 13-year career in grand prix motorcycle racing

Hayden had long been linked to a Superbike move as his MotoGP career wound down.

Since parting with the factory Ducati squad, he has spent the past two seasons on Aspar's Open class Hondas, but has not had any top-10 finishes in 2015 so far.

"These last two years haven't been so good," said Hayden.

"I haven't been able to get the results on the Open Honda, and I always thought SBK might be something to try.

"I'm getting a little older but I still enjoy the sport, and this will be a new challenge."

"By working together and using all our combined resources, I hope that in the future we can make him the first world champion in MotoGP and World Superbike."

Hayden arrived in MotoGP for 2003 as Valentino Rossi's team-mate in the works Honda squad, fresh from winning the '02 AMA Superbike title in America.

His MotoGP career featured just three grand prix wins - all in 2005/06 - but also the world title in the second of those seasons after an infamous battle with Rossi, who had by then moved to Yamaha. 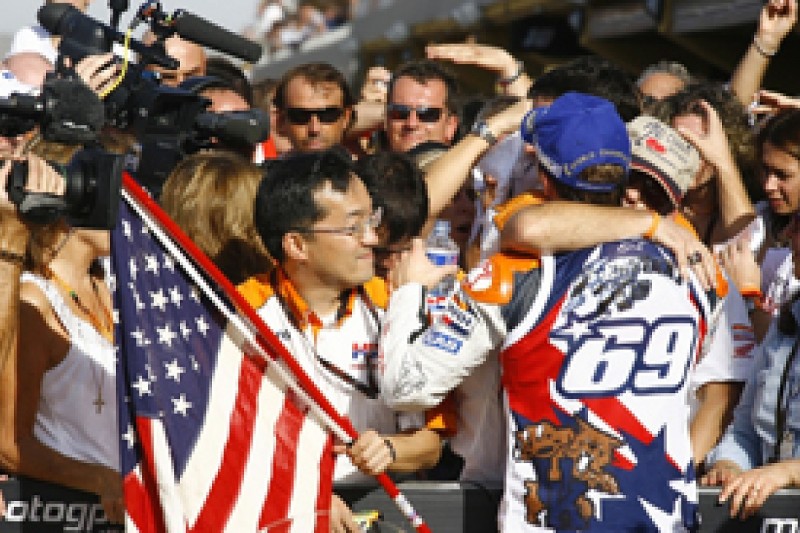 Wins at Assen and Laguna Seca, plus seven other podium finishes, allowed the consistent Hayden to open up an early points lead as Rossi had a troubled run early in the campaign.

Rossi then hit form and began reeling the American in, before grabbing the points lead when Hayden's rookie Honda team-mate Dani Pedrosa took him out at the penultimate round at Estoril.

There was a final twist in the Valencia finale, though, as Rossi crashed out and Hayden clinched the crown with a third-place finish.

He subsequently struggled to adapt his riding style to an 800cc Honda designed more to Pedrosa's liking, and left for Ducati - where he would again partner Rossi for a spell - in 2009.

Though Hayden continued to notch up occasional podiums, the last of them a third place at Jerez in 2011, his Laguna '06 win appears certain to have been his last MotoGP victory.

Rossi said his former team-mate and title rival's Superbike move was "a great shame for MotoGP".

"He's a great rider and also a great guy," said Rossi. "It's always good fun to share time with Nicky.

"I'm also part of the best moment of his career, because he beat me and became world champion.

"We will miss him a lot, but I hope he can enjoy World Superbikes and I hope his Honda is strong because I want to see him on the podium and fighting for victories."

Hayden is currently paired with Eugene Laverty at Aspar, which has already announced Yonny Hernandez as one of its 2016 riders.