Ducati fears a "dangerous" precedent has been set by the decision to penalise just Yamaha and not its MotoGP riders for racing illegal engines at the Spanish Grand Prix.

An FIM investigation into the use of non-homologated valves in the engines of Maverick Vinales, Valentino Rossi, Fabio Quartararo and Franco Morbidelli at the opening round at Jerez concluded on Thursday that Yamaha contravened the rules.

The sanction centred on Yamaha having not gained unanimous approval from the manufacturers' association to change the valves from the ones it had submitted with its sample engine design for homologation pre-season.

Yamaha was docked 50 constructors' points, amounting double that of what it scored for Quartararo's Spanish GP win, while both the works Yamaha and Petronas SRT squads were docked 20 and 37 teams' title points - the latter for points scored at the first Jerez race and the Styrian GP, where Morbidelli used his Spanish GP engine and finished 15th.

However, no points were deducted from either of Quartararo, Vinales or Morbidelli's riders' standings tally, meaning they remain within 25 points of championship leader Joan Mir.

The Japanese manufacturer blamed an "internal oversight" for it using the illegal parts, but insists there was no "malintent" in what it did as the valves it used from two suppliers were designed to the same specification and accepts the ruling.

But Ducati boss Paolo Ciabatti - who also accepts the decision - fears the FIM only punishing Yamaha could lead to manufacturers in the future contravening the rules and claiming a similar case of oversight to that of Yamaha.

"I think the FIM stewards thought it was Yamaha's mistake and made this decision, which we accept because no one will complain," Ciabatti told Sky Italy.

"It is a bit of a dangerous precedent, however, because the riders, [though] not their fault raced with bikes that were not regular. 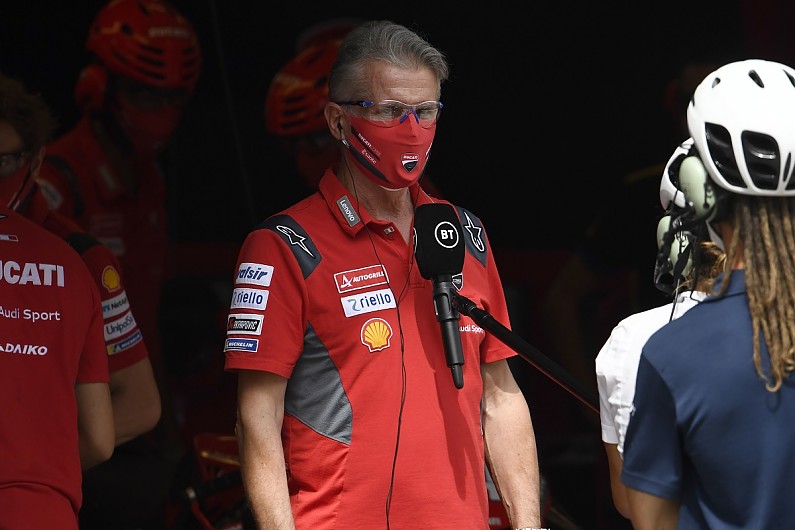 "A precedent has been set that could be risky in the future, because you then enter into the area of mistakes made in good faith or involuntarily and other kinds of evaluations that could possibly create problems in the future in terms of regulations.

"But we said we would accept this decision, so we will not make any protest."

Suzuki boss Davide Brivio admits the situation is tricky, because a decision to punish the riders could "put a shadow over the championship" for whoever ultimately wins it.

"We respect the situation, it's a difficult situation," Brivio told MotoGP's world feed.

"Whatever you do under this circumstances, with what's happened, you would put a shadow over the championship.

"If you penalise the riders, then whoever is going to win - if it's not them - you might say: 'Ah that's because of the disqualification'.

"With this sentence it might put a shadow on their championship, because they scored a lot of points, heavy points, in the race where the engine, it looks like, was not regular.

"It's a difficult decision, from our side we respect the decision, we're happy to continue to fight on the track and I like the situation that the riders' situation remains like this, because we don't want any shadow.