Aleix Espargaro says he "hates" how he had to make "on the limit" overtakes in the MotoGP Teruel Grand Prix because of the Aprilia's poor acceleration.

Espargaro was fighting his way through from 13th on the grid in Sunday's Aragon race, passing the likes of Ducati's Andrea Dovizioso, Tech3's Iker Lecuona and LCR's Cal Crutchlow, and was putting Petronas SRT's Fabio Quartararo under pressure for eighth late on.

The Aprilia rider's overtake on Dovizioso at Turn 1 on lap 17 forced the Ducati rider off track.

Espargaro feels his moves were "clean", but concedes the deficiencies of the Aprilia means he is "forced to be on the limit" when racing.

"I hate to overtake like I did to Dovi, also with Lecuona I was very close to the limit, also to Crutchlow," he said.

"The Aprilia doesn't accelerate like other bikes, so when I arrive on the brakes I am not close to them.

"So, I have to recover the space, try not to lose in acceleration plus try to overtake. This is why in last week's race I didn't make any overtakes at all, but [on Sunday] I had more commitment, I was focused to do a better race, I felt better.

"I risked more and I think I was clean - on the limit, but clean. But again, I'm forced to be on the limit. 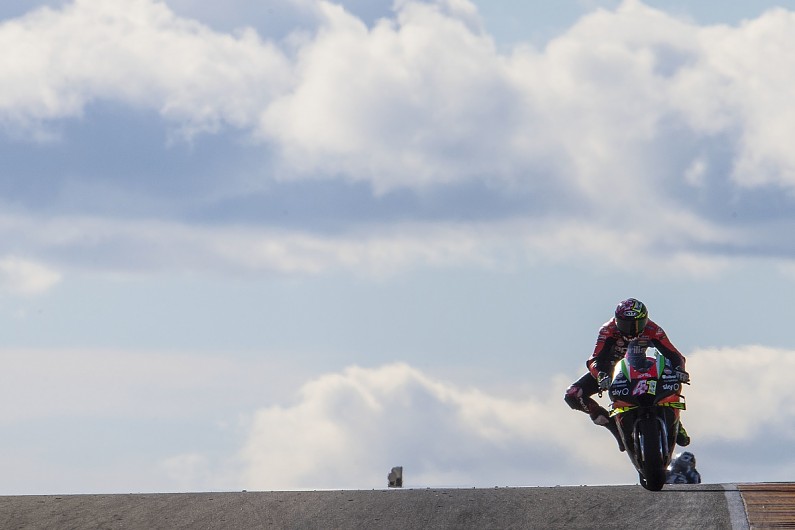 "I feel very sorry for Dovi because I know he's fighting for the title, I tried to be very clean but the Ducati is very fast. So, with the Aprilia I have to risk more."

Espargaro's race came to an end with three laps to go when his Aprilia's engine "exploded" on the back straight while he was chasing down Quartararo.

"I'm very disappointed because starting 13th, I knew it would be difficult, but starting the race I talked with Massimo Rivola [Aprilia CEO] and I said I don't care if I crash, I want to risk," he added.

"I felt better than last weekend, I had a good start and I had a big fight with Lecuona and then I overtook Crutchlow, I overtook Dovizioso as well.

"And then I was gaining time on Quartararo and [Maverick] Vinales, and then three laps from the end when I caught Quartararo, I was trying to overtake him and in sixth gear the engine exploded.

"So, it's a shame. We were doing a very, very good race. I think we were just three seconds back from the fourth place of Pol [Espargaro].

"I did everything I had, I think I was very competitive, fighting on the brakes like hell trying to overtake many riders because I lose in acceleration. But the engine blew, so it's very frustrating."