Japan has not had a MotoGP polesitter in the premier class since Makoto Tamada in 2004, with Nakagami ending that barren run on his LCR Honda with a 1m46.882s to deliver on the searing pace he has shown all weekend at Aragon.

Suzuki's Alex Rins fired in a 1m47.593s to take a turn on provisional pole, before Nakagami returned to the top of the order with a 1m47.072s.

Having backed out of his first lap as Fabio Quartararo followed him, Mir had his first flying lap cancelled and was 12th at the end of the opening runs.

As the session reached its conclusion, improvements were minimal, with Nakagami making the biggest improvement on his own time.

Nakagami hooked the lap together to produce a 1m46.882s to claim pole to celebrate his new two-year Honda deal signed on Thursday.

The Japanese rider came close to being denied pole by Petronas SRT's Franco Morbidelli, though the Italian missed out by 0.063 seconds in second.

Rins leaped up to third on his final lap, putting him in a strong position to go for back-to-back Aragon wins having won last weekend from 10th. 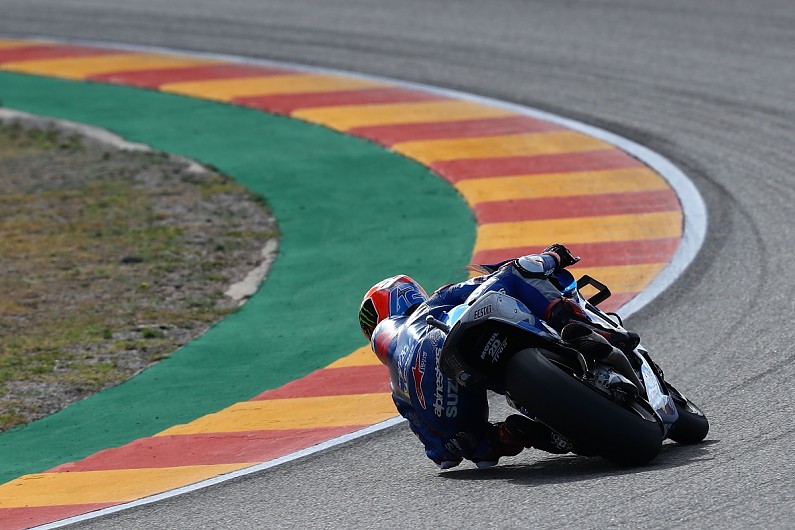 Vinales jumped to the head of the second row with his final effort, while Q1 graduate Johann Zarco was fifth and top Ducati runner on a miserable Saturday for the Italian marque.

Zarco crashed at the last corner at the end of the session, which initially led to several lap cancellations - though these were reinstated owing to a miscommunication between the marshals and Race Direction.

SRT's Quartararo missed the yellow flag zone and was sixth on his Yamaha, with LCR's Cal Crutchlow seventh ahead of Tech3's Miguel Oliveira and Q1 pacesetter Pol Espargaro on the works team KTM.

Alex Marquez completed the top 10 on his Honda for his best qualifying result of the year, with fellow rookie Iker Lecuona also claiming his best Saturday result in 11th on the sister Tech3 KTM.

Championship leader Mir ended up with just one proper attempt at a flying lap at the end of Q2, with his 1m47.642s only good enough for 12th on the Suzuki.

Jack Miller led Q1 after the opening runs and looked set to get a place in Q2, but late improvements for the Espargaro brothers and Zarco pushed him down to 14th.

Aleix Espargaro on the Aprilia held a Q2 place for a few seconds with his 1m47.372s, but was denied by Zarco and will start from 13th.

Improvements for Brad Binder on the KTM and Honda's Stefan Bradl meant Dovizioso was relegated to a equal-worst qualifying result of the season of 17th as his Aragon misery continues.

Francesco Bagnaia on the Pramac GP20 was 18th ahead of works counterpart Danilo Petrucci, with the grid completed by Avintia's Tito Rabat and Bradley Smith on the sister Aprilia.