Honda has confirmed reigning MotoGP world champion Marc Marquez's recovery from a broken arm is "proceeding as planned" amid reports he may need a third surgery.

Marquez broken his right arm in a heavy crash during the season-opening Spanish Grand Prix at Jerez back in July.

He tried to stage a comeback the following week at the Andalusian GP just days after surgery, but withdrew after qualifying when he began to suffer more swelling in the arm and a lack of power.

Marquez then required a second surgery when the plate fitted to his right arm broke while allegedly opening a window at his home, having been weakened by his comeback attempt.

In August Honda confirmed he would be out of action until at least the end of October, though the earliest he will now return is November's European Grand Prix, if at all.

Reports in the Spanish press on Wednesday stated Marquez could be facing a third operation, but Honda has since rubbished this.

A statement from an HRC spokesperson read: "The Repsol Honda Team would like to confirm that Marc Marquez's recovery is proceeding as planned.

"While it is a long and intense recovery, Marc and those in his team have no cause for concern."

A picture posted on Marquez's social media accounts just moments before this statement was sent showed him weight training, further brushing off claims of an impending third operation. 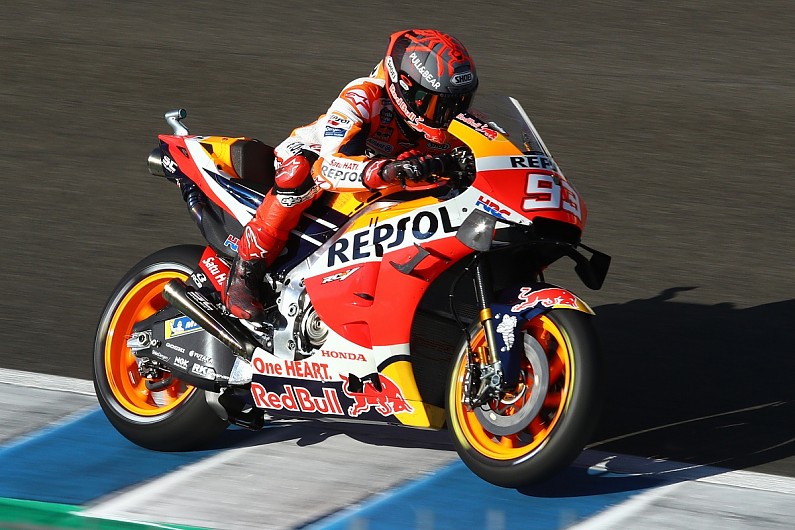 Through his absence from last weekend's Aragon GP, Marquez finally mathematically dropped out of the title race, meaning 2020 will be just the second season after 2015 the Spaniard has not been world champion since he stepped up to MotoGP in 2013.

His rookie brother Alex scored his maiden MotoGP podium in the wet French GP at Le Mans two weeks ago, and backed this up with a charge through to second from 11th in the dry Aragon race.

Those rostrums marked Honda's first of a largely difficult 2020 campaign, with HRC's top runner and best championship hope currently LCR's Takaaki Nakagami on the 2019 bike, who is 29 points behind points leader Joan Mir in sixth.

Honda test rider Stefan Bradl has been deputising for Marc Marquez since the Czech GP, and will do so again this weekend for the Teruel GP.