Aragon Grand Prix poleman Fabio Quartararo says his "strange" MotoGP FP3 crash wasn't a result of him unnecessarily pushing in the cold conditions and insists he "did nothing wrong".

Quartararo's Saturday almost ended in disaster when he crashed heavily at Turn 14 during the morning practice session.

Having been stretchered off track, the Petronas SRT rider was taken to the medical centre for checks.

He suffered no broken bones, but still had to contend with pain in his hip.

Explaining the accident, his second of the weekend after a spill in FP1 (pictured below), Quartararo said: "I think I did nothing really wrong.

"It's not that I braked 20 metres later, or I braked harder.

"I did not exactly the same [as the lap before] but less than one bar of [brake] pressure more in the corner and I crashed.

"The conditions were really tricky, you need to be always precise and this morning I wanted to push a little bit with used tyres, but we had this crash.

"I did nothing wrong - we didn't even put in a new soft tyre to do the time attack because we knew we were quite safely into Q2.

"It was just normal riding, not pushing." 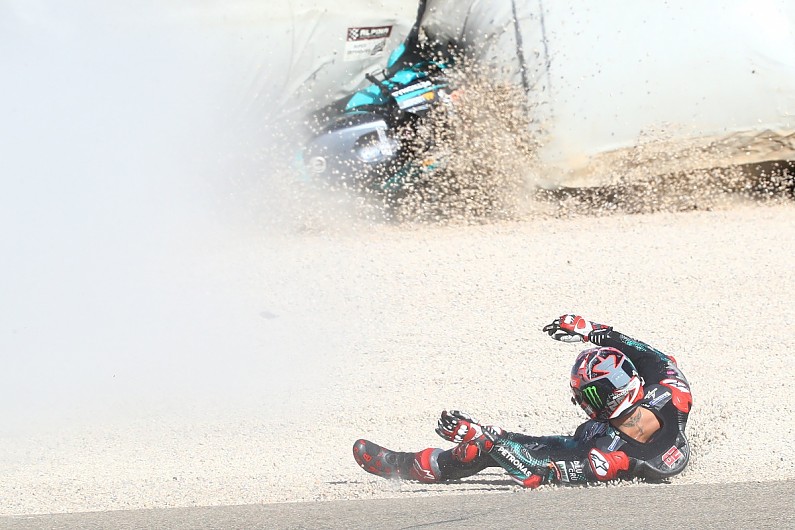 Quartararo admits he was "worried" initially as he couldn't put wait on his legs, but quickly realised his championship hopes were not in jeopardy when he understood he'd not broken any bones in the crash.

When asked by Autosport if he was worried his championship would be compromised, he said: "No, because I knew nothing was broken.

"I knew that it was going to be painful. When I wanted to stand up I was worried, because I stand up and put the weight on the leg and felt it's not good.

"Was kind of a strange moment for me because it was quite a strange crash.

"I was a bit worried because when you have this type of crash you never know what was going to happen.

"Luckily nothing is broken, just some pain in the neck and the leg."