Aleix Espargaro says the collision with his brother Pol in qualifying for the MotoGP Aragon Grand Prix was a result of him having to avoid a slow Alex Marquez.

Espargaro was on a flying lap ahead of Pol's KTM in the closing stages of qualifying when the latter ran into the side of the Aprilia rider at the final corner.

Pol broke one of the wings from his fairing while Aleix's session was over owing to a hefty knock to his right ankle.

Aleix was forced to sit up to avoid Marquez, leaving Pol with nowhere to go, and says "I don't really understand" why the Honda rider was going so slowly.

"Well, it was not very strange," explained the Aprilia man after qualifying a season-best ninth.

"Alex Marquez was in the middle [of the corner] and I had to pick up the bike to avoid contact and Pol hit me.

"I was pushing, in that lap I did my [personal best] record in first split and in the last corner Alex was in the middle of the line.

"Maybe I was a little bit wide on the braking, I was risking everything and I had to pick up the bike.

"And when I picked up the bike, Pol hit me. Unfortunately, our qualifying was finished.

"But I really don't understand how one guy in MotoGP when we arrive there at 350km/h in that corner can be stopped."

Pol Espargaro was unwilling to make any further comments as he feels his words about rivals lately have been "distorted" in the press, but feels the matter will go to Race Direction. 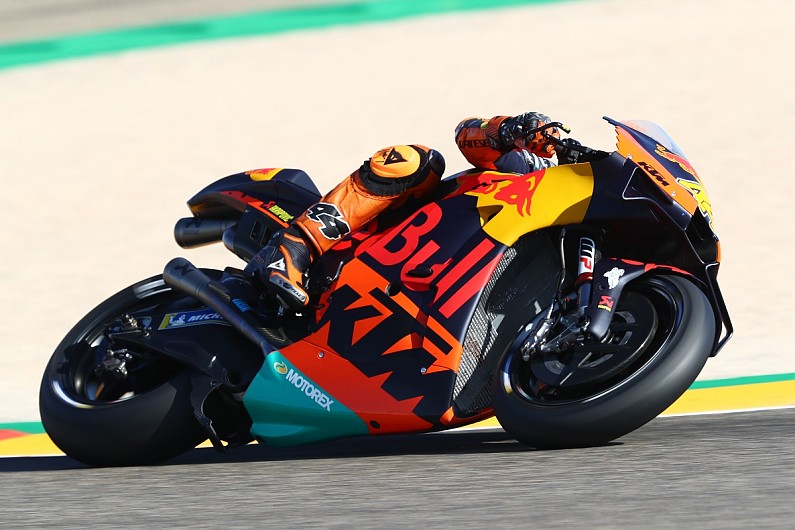 "I wanted to do a fast lap in the second run as I was doing," the KTM rider said after qualifying 12th.

"So, everything was going very good till that last corner in the qualifying.

"I was coming in about 1m47.4s, I had on the dashboard that time, so for sure [good enough] to be in the second row.

"But then this happened in the last corner. I'm sorry, but I will not talk about it.

"I don't want to talk about other riders that are not myself because in the past days when I talk about somebody else my words get distorted and I really don't want to get in trouble anymore.

"You will know from Race Direction after Moto2 what they are going to do and you will have the answer of what really happened."

Marquez says he was trying to avoid getting in the way of both Espargaro brothers and doesn't feel any penalty is necessary.

"I don't know what happened," Marquez replied when asked about the incident.

"I was trying to push behind [Maverick] Vinales, but then I saw that Aleix and Pol were coming and I didn't want to be in the middle.

"Aleix cut the gas and Pol was coming. For me, it's not that Aleix was not focused, for me it's not any penalty."