Maverick Vinales once again led a Yamaha 1-2-3 after topping second practice for the MotoGP Aragon Grand Prix, while no Ducati made it into provisional Q2 spots.

After the next salvo of laps, Morbidelli assumed control with a 1m49.162s, before dipping into the 1m48s for the first time with a 1m48.992s 10 minutes into the session.

Morbidelli's lap went unchallenged for the next eight minutes, when Suzuki's Joan Mir put in an encouraging 1m48.891s.

Tyre warm-up has been an issue for Suzuki this season, particularly in qualifying, but Mir's lap and his following 1m48.688s were set at the start of a stint on brand new soft rubber.

With just over 10 minutes to go, Quartararo returned to the top of the order with a 1m48.406s, before improving to a 1m48.210s to go almost half a second clear of the field.

A flurry of personal best laps started to come in when the session entered its final five minutes, as the colder conditions expected for FP3 will make progressing into Q2 much harder.

But only Vinales on the factory Yamaha put Quartararo under threat, with the Spaniard monstering the field with a 1m47.771s - a lap some three tenths quicker than the FP2 best from one year ago when track temperatures were around 14 degrees warmer.

Vinales went unchallenged through to the chequered flag, with Quartararo reducing his factory team counterpart's advantage to 0.249 seconds with his final effort of 1m48.020s.

Morbidelli completed the top three on the 2019 M1, with Mir (below) the top Suzuki in fourth ahead of best Honda rider Cal Crutchlow on the LCR RC213V. 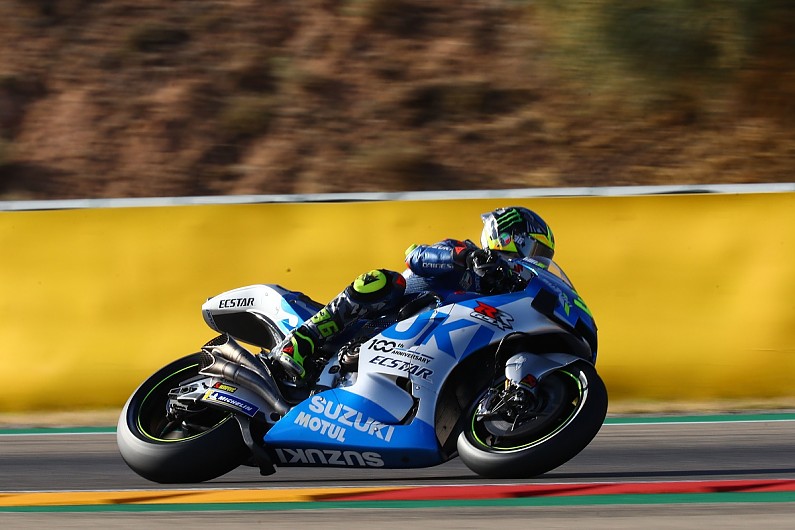 Aleix Espargaro got his Aprilia up to sixth ahead of his KTM-mounted brother Pol, while Alex Marquez leaped up to eighth on his factory Honda late on.

Takaaki Nakagami (LCR) and Alex Rins on the sister Suzuki completed the top 10, with Johann Zarco 11th on the Avintia Ducati after a late crash at Turn 2.

Brad Binder completed the field in 21st on the KTM having crashed at Turn 14 15 minutes into the session. Stefan Bradl also took a tumble at Turn 12.

Saturday's FP3 sessions for all three classes have been delayed by half an hour to allow for safer track temperatures, after MotoGP FP1 was postponed by 35 minutes on Friday morning.