Bradley Smith topped a wet first practice for the MotoGP French Grand Prix on the Aprilia ahead of home hero Johann Zarco on the Avintia Ducati.

Smith's future beyond this weekend is uncertain as Andrea Iannone's appeal to have his 18-month doping ban overturned will be heard on Thursday and could be in a position to return for the Aragon Grand Prix next weekend.

Despite a spate of crashes in the preceding Moto3 session, riders were quick to start learning the conditions when the first premier class outing of the weekend got under way.

MotoGP's last full wet race was the 2018 Valencia Grand Prix, which was won by Ducati's Andrea Dovizioso and featured Pol Espargaro on the KTM on the podium.

Both traded top spot in the early part of FP1 at Le Mans, with the Ducati taking the advantage briefly with a 1m45.785s with around 28 minutes to go.

Moments later, Ducati stablemates Jack Miller and Francesco Bagnaia on the Pramac GP20 would demote him, before Danilo Petrucci on the sister works team Desmosedici took over top spot with a 1m45.326s.

Petrucci - who was on the podium in the dry at Le Mans last year - was shuffled back by Yamaha's Maverick Vinales with a 1m45.121s, though the Ducati rider ensure this was short-lived when he posted a 1m44.931s.

With eight minutes to go, Miller returned to the top of the timesheets with a 1m44.735s, which soon came under threat as lap times continued to drop as the session drew to a close. 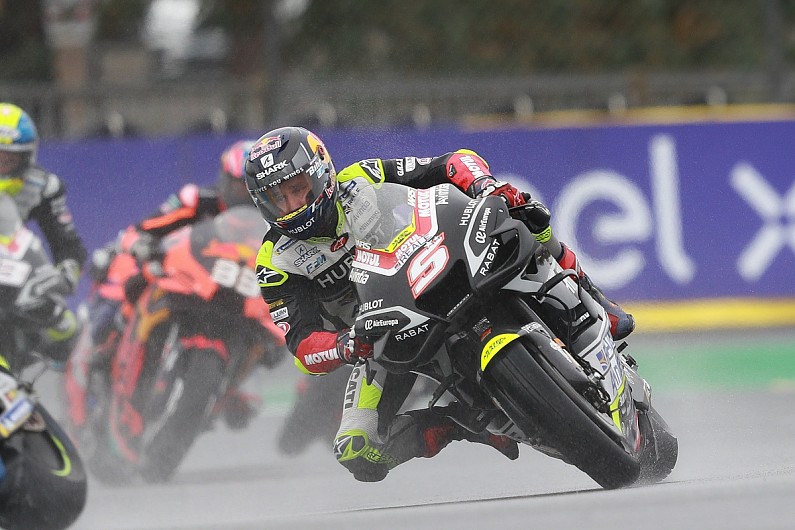 As the chequered flag came out, Smith was hooking together a lap threatening top spot on the Aprilia and produced a 1m43.804s to end FP1 fastest of all by 0.154 seconds.

Zarco leaped up to second on his final lap on his GP19, with Petrucci holding onto the top three ahead of Miller and Dovizioso, with Vinales completing the top six.

Morbidelli was shuffled back to seventh ahead of Valentino Rossi on the works team Yamaha, while LCR's Cal Crutchlow - who admitted on Thursday his right arm is "not in a great situation" still - was ninth on the Honda and ahead of KTM's Espargaro.

The Suzuki duo of Alex Rins and Joan Mir were 11th and 12th, while championship leader Fabio Quartararo was some 2.6s off the pace down in 18th.

With weather forecasts predicting drier conditions across the weekend, the need to push in FP1 came with little reward and likely influenced Quartararo's caution.

Stefan Bradl didn't set a time on the factory Honda, though has spent the last two days at the Algarve circuit in Portugal testing the RC213V.