Morbidelli insisted at Catalunya that he has had to re-evaluate his aims for this season following his San Marino GP win, as his speed deficit to the other Yamaha riders was too great.

When asked by Autosport ahead of the French GP if he would now be asked to assist Quartararo, Morbidelli replied: "I am not thinking about that because first I'm still in play.

"Second, the team didn't ask anything. And third, I think it's a thing that goes a little bit against the nature of our sport. So, because of these three reasons I didn't make any thought on this."

Quartararo says team orders will only be employed at the "last moment" of the season if required, but for now insists his Yamaha stablemates simply need to keep fighting for wins.

"No, my team-mates need to fight for the victory," he said when asked if team orders would be applied from now. "It's not the last race. For sure, if in the last moment of the last race we need to do something, there will be some team orders. 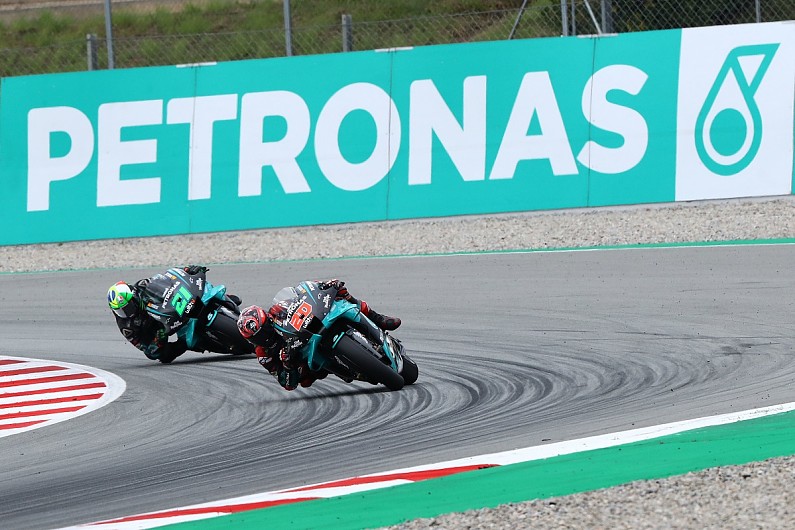 "And it would be reversed. If Franco was fighting for championship in the last race, for sure I will help.

"But at the moment there is no team orders until the last moment of the season and feel this is the best thing to fight for a championship."

Suzuki's Mir echoed Quartararo's comments and says they can't be considered right now as team-mate Alex Rins "has a chance", though he is 48 points adrift in the standings.

"So, I think if in the last two races [or] last race one rider is not able to win the championship, [but] the other one can, for sure I think there will be team orders."

Rins has been in this situation before, when he aided former Moto3 team-mate Alex Marquez to the lightweight class title in 2014, and is open to helping Mir should his own chances disappear.

"If I don't have the chance to win the championship, for sure I will try to help Joan," Rins said. "I already did in Moto3 with Alex Marquez. It makes no sense [not to].

"If you want to put the team on top and you have no chance for the championship, for sure you need to help your team-mate."