Andrea Dovizioso says he was forced to replace "undaunted" with "unemployed" on his race leathers for the MotoGP Emilia Romagna Grand Prix because he lost a bet with his friends.

Dovizioso has been sporting the new message on the rear of his leathers throughout the second Misano weekend, in reference to his uncertain future in MotoGP.

He announced last month ahead of winning the Austrian GP that he would not be re-signing with Ducati beyond 2020, and admitted at the time he has no "plan B".

Dovizioso took over the lead of the standings after finishing seventh in last weekend's San Marino GP at Misano, with a crash for Petronas SRT's Fabio Quartararo putting the Italian six points clear of the Yamaha rider.

As it turns out, Dovizioso's friends made a bet with him that he would have to put "unemployed" on the back of his leathers if he was to take the lead in the championship after the first Misano race.

"I was forced to put that because I bet with my friends," Dovizioso said.

"They said to me 'if you are first in the championship after Misano 1, you have to put that on for the second race'.

"And it happened! So, I didn't work that well to create that situation because I finished seventh.

"But in the end, it happened and I had to put it on.

"If you bet something with your friends, you can't go back. So, I was forced to from my friends." 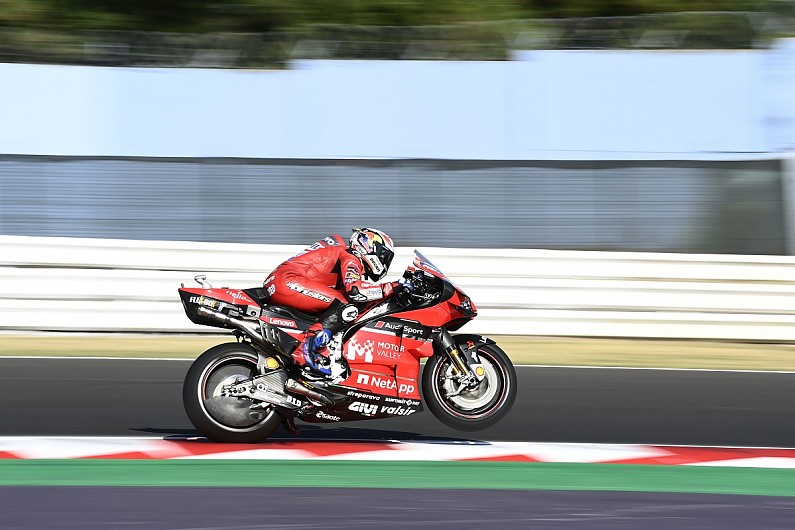 Dovizioso's struggles under braking as a result of Michelin's 2020 tyre construction hampered him throughout the first Misano weekend, but he made a step forward in this area in the test.

Though he and Ducati were able to "confirm" the steps they made in the test, Dovizioso admits he is not "where I expected to be" after qualifying 10th having had to come through Q1.

"it's very difficult to change the braking because a lot of things happen on braking," he explained.

"What I did in the last three years over the competitors is not working.

"I'm not trying to do that, but to change that and adapt to that is so difficult.

"Also, the set-up of the bike is completely different to what we did in the last three years.

"So, it's not instinctive for me to do that and I have to put a lot of effort to ride.

"So, it's the reason why I'm struggling a bit.

"But in the afternoon my feeling improved, I was able to brake harder and the 1m31.5s in Q1 was good.

"I knew I needed two tenths to be in the first two rows, but I couldn't make that perfect lap in Q2.

"I think we are closer than the first race, but not where I expected to be."