Fabio Quartararo admits he doesn't have the feeling with his Yamaha "exactly like Jerez", but gained a confidence boost by topping MotoGP San Marino Grand Prix practice.

After dominating the opening rounds at Jerez in July, Quartararo scored just 20 points across the Brno/Red Bull Ring triple-header last month as problems with the Yamaha meant he couldn't even manage top six finish.

But the Petronas SRT rider was back on form at Misano on Friday, leading the combined times after topping FP2 with a 1m32.189s.

Quartararo admits he still has "some problems" with the bike to overcome, but was satisfied with his day given it's been "such a long time" since he topped a session.

"[I'm] not feeling exactly like Jerez, because we still have some problems that we need to manage by ourselves," Quartararo said of his day at Misano.

"But [I'm] feeling good. Of course, first of all I wanted to finish first because it's such a long time that I don't finish first in one session.

"It's always a pleasure to see your name on top and see that you make a good job during the practice.

"But, also on the pace, I finished with 25 laps on the rear and we put the hard front in the second run and we made a big improvement.

"It was good to run the hard front. It's quite critical to warm up and everything, but in the end the feeling was good.

"I'm happy to finish first and it's always good to see your name on top. More than a mental game, it's more for confidence." 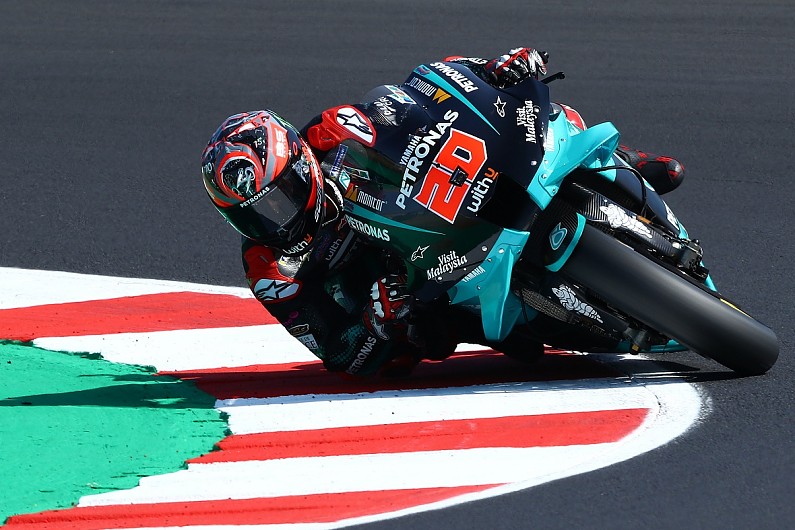 Quartararo suggested Yamaha has brought something minor for the two Misano races, and says he will have some "great news" in terms of updates for the Catalan GP at the end of the month.

"Honestly, Yamaha is working so hard, we have a little bit of [a] positive [step] for Misano, and we know in two weeks [we will] have more great news for Barcelona.

"So, I know they are working hard.

"Of course, I can't say I am fully confident because we don't have a package that I fully want.

"But it's so important to believe in them, also put a little bit of pressure [on Yamaha].

"[It's] not new things, but things that we had and we need to have back."