Lecuona was a surprise call-up for KTM to join Tech3 for 2020, after the Austrian marque elected to move Brad Binder up to the factory squad to replace Johann Zarco.

Making his debut as a replacement for the injured Miguel Oliveira at Tech3 in the Valencia GP last year, Lecuona endured a tough start to this season.

Crashing out of the opening three rounds while fellow rookie Binder managed to win at Brno, Lecuona was savaged in the media, with rumours soon swirling that outgoing Ducati rider Andrea Dovizioso could oust him from his 2021 Tech3 deal.

This was denied by Tech3 and KTM, with Lecuona finding form in Austria with two top 10 results, while finishing just under half a second off the pace in fifth on the combined timesheets on Friday at Misano.

Espargaro followed Lecuona (below) late on in FP2 and noticed the rookie was no longer "overriding" the KTM. 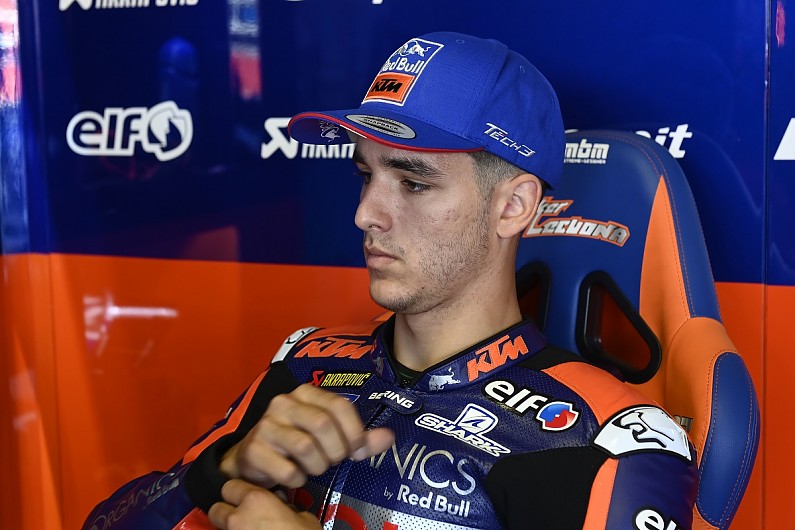 "I must say honestly that I was really, really surprised about Iker, because today I was behind him in the last couple of laps and he was riding smooth," said Espargaro, who was fourth quickest.

"He was riding nice and I congratulated him because honestly I was really, really surprised with his riding style.

"He was fast. Normally with Iker, maybe he was trying too hard and he was just overriding a lot because he wanted it to come very quick and it was not coming.

"But today, man, I was really surprised. I was riding behind him and he seems so smooth, doing the lap time very fast.

"So, I was shocked. I'm very happy for him because I know he was fighting hard to get it."

Lecuona noted that Espargaro wanting to follow him in FP2 proved his speed on Friday.

"For me I'm really happy, because finally if Pol wants to follow me it's because I go fast," he said.

"This is a good start because everybody wrote many things after the first races and now I just need to say thank you to the team for pushing me."