Valentino Rossi says it's "difficult to manage" the Yamaha's speed deficit to its MotoGP rivals having had to "suffer" in the Styrian Grand Prix.

In both Austrian races, Rossi was top Yamaha runner, with a fifth-place finish in the Austrian GP and a ninth in the Styrian event.

With the Red Bull Ring arguably Yamaha's weakest circuit on the MotoGP calendar, the Japanese manufacturer endured a speed deficit to the Ducatis which reached 10km/h down on the straights.

Though Rossi says this has been the case for the past few years, he noted it was worse in the Styrian GP as more riders were able to "put on the ground" their power advantage over the M1.

"We know that in this track we have to suffer because here it's very important the top speed, and this year the difference in the top speed is huge, very difficult to manage," Rossi said on Sunday.

"Already last year it was like this, and we push a lot to improve the situation, but also this year the situation is very similar.

"So here you have a lot of long straights and he have to suffer.

"For me personally, strange races because last week I was able to do P5, but also because we had a lot of crashes in front.

"Today, this weekend everybody fixed the problems and they were able to put on the ground the extra power compared to us and nobody make mistakes and the first Yamaha arrives P9.

"It's difficult, because more or less the problems are similar as the last years." 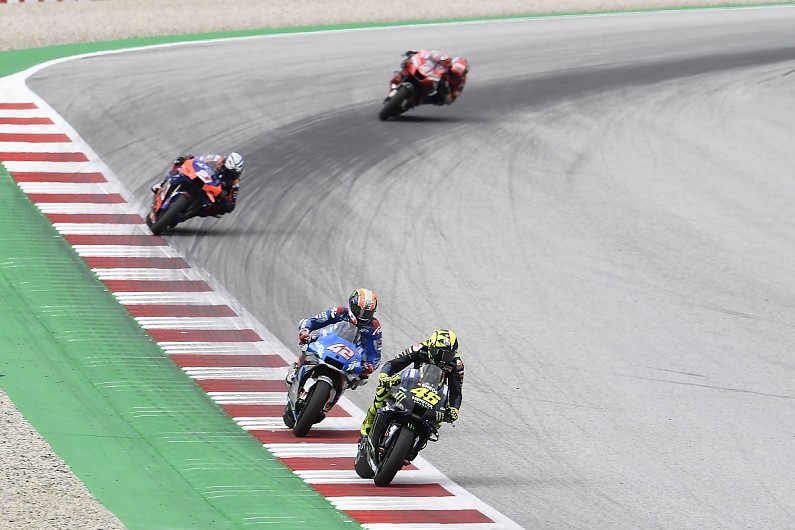 Yamaha is one of only two bikes using an inline four-cylinder engine, with the other being Suzuki.

Though not as powerful as the V4s of the Ducati, KTM, Honda and Aprilia, Suzuki's deficit at Red Bull Ring was only 4-6km/h compared to the Ducati, with Joan Mir set for victory in the Styrian GP before it was red-flagged, having finished second in the Austrian GP.

Rossi sees this as proof Yamaha's power deficit has nothing to do with the actual engine philosophy it is using.

"Suzuki in these two weekends were impressive," he added. "They work very much, very hard and in a good way.

"So the problem of the top speed is not the inline four [engine].

"Suzuki have more grip than us in acceleration, but also the engine is clearly faster. I was behind Rins and from one corner to the other he accelerates a lot faster than me.

"It means Suzuki works in the right [way]. We hope we can improve."