© 2020 Autosport.  All rights reserved.
Previous / Espargaro: Miller and I wanted win "too hard"
Next / Morbidelli was "shy" at Turn 2 after crash

Andrea Dovizioso doesn't feel Ducati has "the situation under control" to be a consistent 2020 MotoGP title challenger, despite closing in on the points lead in the Styrian Grand Prix.

Following his Austrian Grand Prix win, Dovizioso was a damage-limiting fifth at the second Red Bull Ring race on Sunday after a late mistake dropped him out of podium contention.

With championship leader Fabio Quartararo only 13th, Dovizioso is now just three points adrift of the Petronas SRT rider heading to the next triple-header in September.

But the Ducati rider doesn't feel Ducati has fixed its inconsistent form with the 2020 Desmosedici, which has left him "very disappointed".

"For me, the situation in the championship is good, but I mean when you have that feeling and you have a lot of ups and downs, you don't have control of the situation," Dovizioso said.

"So, I don't have a good feeling in this moment because I don't feel we have the situation under control to push in some tracks.

"And every race you can have a lot of ups and downs.

"This has never happened to me and us in the last four, five years, and I'm struggling with that and I'm very disappointed about that because nobody until now from the first round is consistent and I think it's something unusual.

Inconsistency struck Dovizioso during the Styria weekend, as he struggled in qualifying with a "strange" feeling from the tyres, and was scrabbling for pace on the medium rear tyre in sixth before the race was red-flagged. 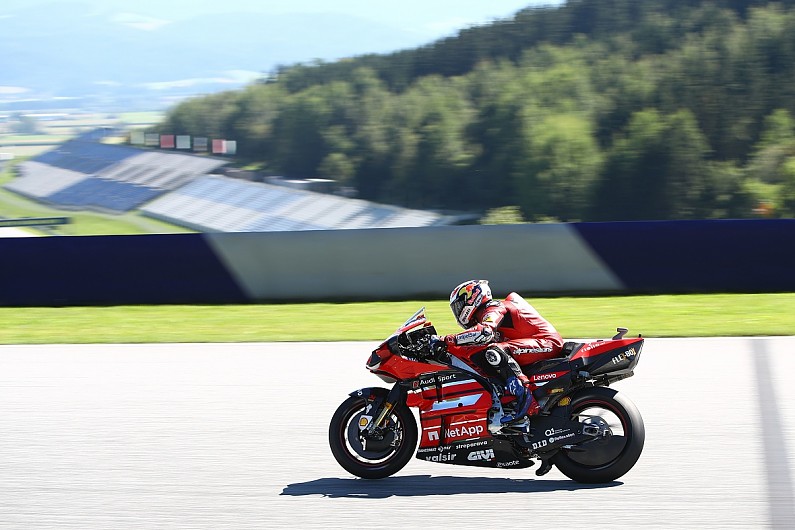 He was much stronger in the 12-lap restart on the soft rear tyre, but was unable to use his strength in braking because he was stuck in the lead pack.

"Well, in the first part of the race it was really bad, a really strange situation because we work a lot and we did a really very long run in the practice and everything worked very well, and I felt very good for the race," he added.

"But from the first lap the tyre didn't work in a normal way and lap by lap it became very bad.

"So, I'm pretty sure there was something [wrong], but we already spoke with Michelin, they will have to study.

"I was lucky because of the red flag, I was able to change the tyre and the soft worked in a normal way.

"Unfortunately I couldn't overtake riders because I started third row and everybody went really fast, and when you are behind you are not able to brake in a normal way.

"Here in Austria, it's even bigger because when you brake there is only one line and with the slipstream and the temperature of the tyre it's impossible to brake.

"My good point was the braking, but when you follow the riders you are not able to brake in the place you want.

"And I'm still struggling one the exit, on the exit I'm still bad and it's the reason I can't prepare the overtake because I couldn't exit with the same speed as the rider in front of me."

Share this article on Facebook Twitter LinkedIn Email
Previous / Espargaro: Miller and I wanted win "too hard"
Next / Morbidelli was "shy" at Turn 2 after crash
© 2020 Autosport