Johann Zarco took a shock MotoGP pole position for Avintia Ducati at the Czech Grand Prix after a late crash for Fabio Quartararo, while Andrea Dovizioso was only 18th.

Zarco put the KTM on the front row at Brno one year ago in wet conditions, but a week later had quit the Austrian marque amidst a miserable season on the RC16.

Signed to ride for the underfunded Avintia squad on a year-old Ducati, Zarco stunned with his first pole since his Tech3 days - having last started from pole in Malaysia 2018 - to lead a French 1-2 in qualifying.

The early part of the session was topped by KTM's Pol Espargaro with a 1m56.142s, though this was quickly beaten by Quartararo with the best lap of the weekend so far of a 1m55.990s.

As the clock ticked into the final moments, the timing screen was ablaze with fastest sectors, with Zarco tucked in behind KTM's Brad Binder.

Continuing to find time as the lap wore on, Zarco produced a 1m55.687s to steal pole away from Quartararo by 0.303 seconds.

Quartararo (below) tried to take the position back, but crashed at the penultimate corner on his final effort and had to settle for second - a position he was promoted to after KTM's Espargaro had his best lap scrubbed having set it under yellow flags. 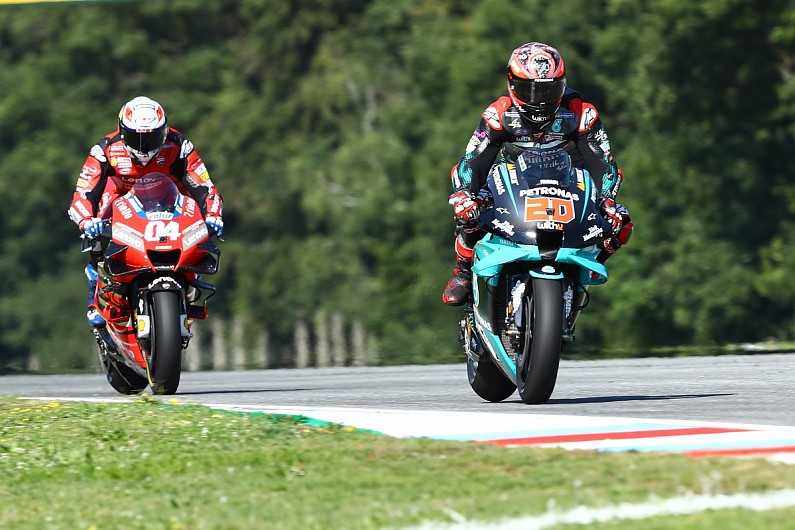 It also promoted Franco Morbidelli - who crashed in FP4 - up to the front row on the sister Petronas SRT Yamaha, while Aleix Espargaro scored Aprilia's best-ever MotoGP qualifying result in fourth.

Maverick Vinales will start from fifth, having been sent out for his final lap too late by Yamaha and couldn't set another effort.

Pol Espargaro brings up the rear of the second row, with team-mate Binder, the next-best Ducati of Danilo Petrucci and Suzuki's Joan Mir making up row three.

Valentino Rossi was 10th on the second works Yamaha ahead of Q1 graduate Alex Rins (Suzuki) and LCR's Cal Crutchlow, who crashed at Turn 9 late on.

LCR's Takaaki Nakagami was dealt late heartbreak when his 1m56.290s lap was deleted after he exceeded track limits on the exit of Turn 12 late on in Q1.

The Japanese rider was relegated from a graduation place in second down to seventh in the session, meaning he'll start 17th.

The biggest shock of the session came in the form of Dovizioso, who struggled on his factory Ducati and could only muster a 1m57.034s to go 18th - some eight tenths away from a Q2 place in the worst qualifying performance of his MotoGP career.

Shuffled back by late improvements for Avintia's Tito Rabat and Tech3's Iker Lecuona in 15th and 16th, Dovizioso was only quicker than Aprilia's Bradley Smith - who crashed at Turn 8 - and the two factory Hondas of Stefan Bradl and Alex Marquez.

Compounding a tough weekend for Pramac following the knee injury for Francesco Bagnaia, Jack Miller missed the Q2 cut and will start 14th.