In the latest in Autosport's 'My favourite race' series, LEWIS DUNCAN reflects on the 2019 MotoGP British Grand Prix which, he believes, proved beyond doubt that the current era is MotoGP's greatest ever

I consider myself to be an extremely lucky motorsport fan. Not only have I somehow managed to build a career in the industry, but at 23 years old I've witnessed some motorsport's truly great days across all forms of racing: The 2011 Canadian Formula 1 Grand Prix, The 2013 Australian MotoGP, the 2018 Isle of Man Senior TT to name but a very few.

But - the latter one aside - I only got witness those through a TV screen merely as a keen observer desperate for a way in.

Great racing happens every weekend in a series, but it's the truly special days that are the ones you dream about being there for, to be in the thick of the action. And heading to Silverstone last year for the MotoGP British Grand Prix, I wasn't holding out much hope for one of those in all honesty.

I have a bit of a love/hate relationship with Silverstone. The first race I ever attended was the 2012 F1 British GP - tickets I won from GP Racing (formerly F1 Racing) for submitting the star letter of the February issue, ironically expressing my disdain for the team orders situation between Red Bull team-mates Mark Webber and Sebastian Vettel at the previous season's Silverstone race. Incidentally, it was all of this that made me want to be a writer.

But I digress. The point is, that was an amazing experience. In 2018, the British MotoGP race was my first in the paddock representing Autosport - a dream come true for me. But the race was cancelled due to a poorly resurfaced track being unable to drain water. I wasn't in the best of moods heading home on the Monday.

Fast-forward a year, the track had been resurfaced properly, and I was now Autosport's Motorcycle Racing Correspondent. 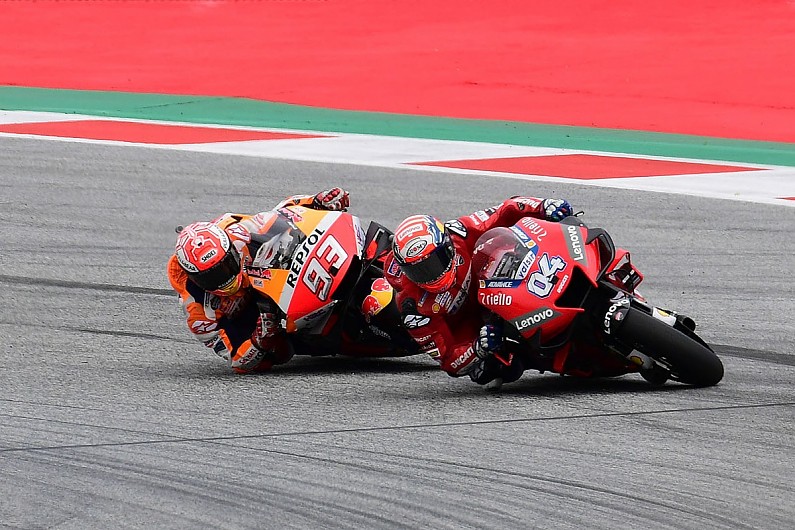 The paddock was abuzz following the thrilling events of two weeks prior in Austria (pictured), when Andrea Dovizioso and Marc Marquez locked horns in an epic duel - with the Ducati rider prevailing with a last-corner move.

Surely there wouldn't be a repeat, I thought. Nevertheless, it was nice to simply be around MotoGP bikes again.

The weekend played out fairly promisingly for Petronas SRT rookie Fabio Quartararo. Setting the pace across practice, a potentially famous first victory looked a real possibility despite only qualifying fourth while Marquez - struggling with the RC213V's turning through Silverstone's fast corners - managed to put his Honda on pole.

By now, Marquez was 58 points ahead of Dovizioso in the championship. Overhauling the Spanish rider wasn't on the cards, however Silverstone at least offered Dovizioso a chance to claw back some points and see where things lay heading to Misano, having won the last race at Silverstone in 2017.

Exposing weakness in Marquez has proven to be nigh-on impossible over the past eight years. And that pressure almost got the best of Rins

But it wasn't to be and nor would the day conclude with La Marseillaise ringing out for Quartararo around the former RAF base. Quartararo had to touch his front brake in reaction to Alex Rins' Suzuki getting out of shape through Copse at the start, with the SRT rider crashing as a result. Powerless to react, Dovizioso was launched airborne by the stricken Yamaha and his Ducati burst into flames as it slammed into the tarmac.

Both walked away relatively unscathed and the race continued, with Marquez leading Valentino Rossi - who qualified second - and Rins, who would soon be facing the rear of the factory Honda after passing Rossi on lap two.

Concerned about the performance of his Honda, Marquez's plan was to thin out the herd through brute force and sheer pace for as long as his tyre could hold. Quartararo and Dovizioso had done part of this for him, while only Rins could run with him - the pair almost two seconds clear of Rossi by lap five. 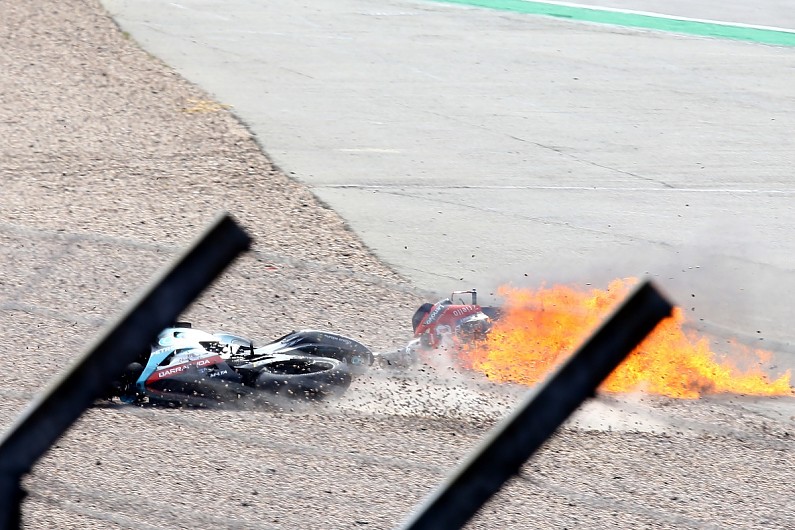 Thus ensued a tense cat-and-mouse game, Rins sizing up where the Honda was weakest. Rins made a play for the lead at Copse on Lap 8, but was put in his place by the bullet-like Honda on the run to Stowe. And so the high-speed chess game resumed.

Rins had experienced the stresses of fighting for victory earlier in the year, when he fended off Rossi following a crash for comfortable leader Marquez at Austin to claim his maiden win. But this was a completely different ball game: exposing any weakness in Marquez has proven to be nigh-on impossible over the past eight years.

And that pressure almost got the best of Rins; he nearly lost the front of his GSX-RR heading into Club with four laps to go, gifting Marquez a bit of breathing space. But, showing the class Suzuki believes will make him a title challenger in 2020, Rins regrouped and made his first serious move on Marquez with a daring raid on the inside of the Aintree.

The power of the Honda ensured it was a fleeting lead, but Rins wasn't finished. On the penultimate lap he nailed his run out of Luffield, positioning his bike to the outside of Marquez through Woodcote. Marquez squeezed him out of room, with Rins almost completely backing off - having thought that had been the final lap. In reality, it proved to be a dress rehearsal and would dictate how Marquez would form his defense of his lead on the final lap.

Running into the Brooklands/Luffield complex for the final time, Marquez used the power of the Honda to keep Rins out of lunging distance, and at Luffield he parked his bike on the apex to stop the agile Suzuki scything through - just as Yamaha-mounted Jorge Lorenzo had done to him in 2013.

Glued to the Honda's exhaust, Rins pointed his GSX-RR to the inside of the Woodcote this time. And as Marquez drifted slightly wide, his momentum curbed just slightly as the front of his RC213V tried to wash out from under him, the on-rails Suzuki rider out-dragged him to the line to win by just 0.013 seconds - the fifth-closest finish in MotoGP history.

Watching it all unfold on the TV screens in the media centre, my body involuntarily leaped from my seat as Rins snatched victory. Adrenaline surging through me, I headed to the paddock to begin the hard graft of rider debriefs, smile firmly etched onto my face. Not just because of what I'd witnessed, but also for the realisation that to be here, at this moment, at one of the greatest races in history, was my life. 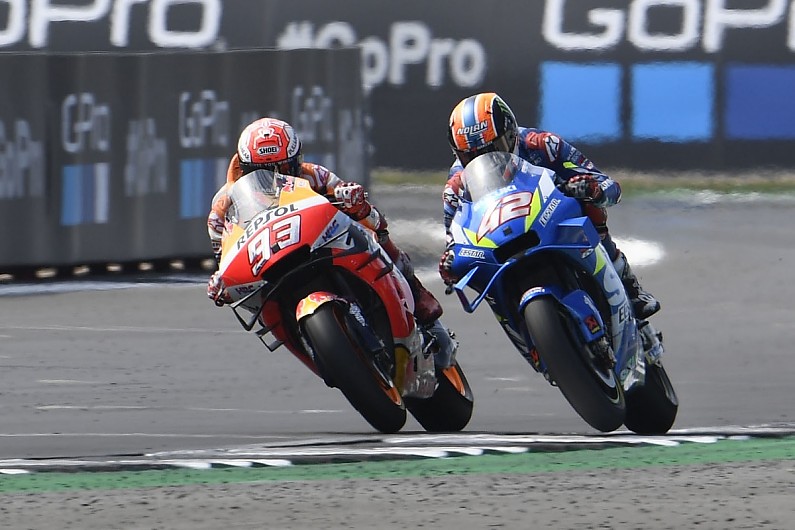 I don't think I've ever taken that reality for granted, but during the coronavirus-enforced shutdown of racing, I find myself being even more grateful for the opportunities I've been afforded.

Marquez brushed off the defeat, highlighting his healthy position in the championship. But he was pissed that, for the second week in a row, he'd been pipped at the line. Driven by the hatred of Rossi fans a fortnight later at Misano, he'd make amends on his way to his sixth premier class title.

The 2019 British GP was in my mind proof beyond doubt that the current age - not the 'golden era' of the late 1980s, early 1990s the older generation harp on about - is grand prix motorcycle racing's true halcyon age

Rins didn't win another race that season, but he'd proven beyond doubt his credentials as a MotoGP frontrunner.

Silverstone, meanwhile, proved that the rose-tinted glasses-wearers pining for MotoGP's return to its 'spiritual UK home' of Donington would be disappointed with the outcome. Since Silverstone returned to the MotoGP calendar in 2010, having last hosted a race in 1986, has had two races conclude with a winning margin of under a tenth of a second. In its history, there have been four races with a winning margin of under 0.150s. Donington, by contrast, had none from 1987 to 2009. The closest race there was in 1997, when Mick Doohan beat Tadayuki Okada by 0.231s.

But perhaps most importantly, the 2019 British GP was in my mind proof beyond doubt that the current age - not the 'golden era' of the late 1980s, early 1990s the older generation harp on about - is grand prix motorcycle racing's true halcyon age. There have been many races over the past few years in the wake of Dorna Sports' overhaul of the technical rules and financial structure in 2016 that have made the case, but for me, Silverstone 2019 cements it for the simple fact that - for the second race in a row - it was only decided at the death.

Silverstone won't appear on a revised 2020 calendar, and that's a shame. But if we're to apply the sentiment of 'good things come to those who wait', the 2019 British GP suggests the 2021 edition will not be one to miss. 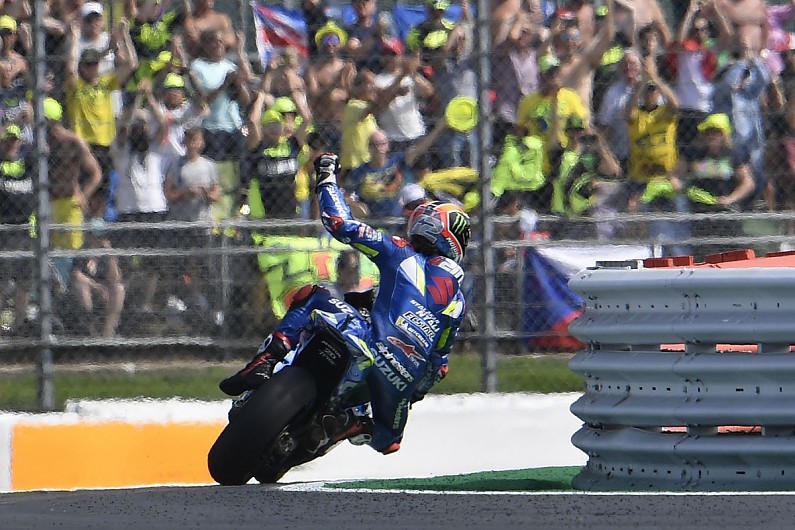