Petronas Yamaha rider Fabio Quartararo said his crash at the beginning of MotoGP's British GP was triggered by Alex Rins' error ahead of him.

Quartararo had a highside at Copse right after the start, and his Yamaha was then hit by Andrea Dovizioso, who suffered temporary memory loss after the accident and was hospitalised for precautionary checks.

Quartararo explained that his crash occurred because Rins, having passed him, had nearly lost his bike going through the corner right ahead.

In order not to hit Rins, Quartararo "shut the throttle a bit too aggressively", and the Frenchman claimed that without Rins' mistake he would not have crashed.

"We had a good start, unfortunately on the first corner, Rins overtook me," said Quartararo.

"He lost quite a lot the rear and I shut the throttle a bit too aggressively to not go into him and I just make a big slide. Unfortunately I had a highside.

"I am okay, quite lucky that I haven't broken something, that is positive. I think Dovi is quite unwell because he had a big crash.

"I didn't even see that he touched the bike - he went over the bike. It was just after when I got up I saw he crashed also.

"If Rins didn't make a mistake, for sure [we'd have kept] sliding and just at this moment I was starting to pick up the bike. For me was just a matter of luck."

The British GP was eventually decided between Rins and Marquez, but Quartararo reckoned that his own pace from the weekend was "really good to fight with them".

"During the morning with 16 laps on the tyre we make [1m]59.6s, that is something that was really good for us. The pace was really good but during the race is difficult to know if we had an opportunity to win.

"If we check on paper, the pace was really good for fight with them [Marc and Rins]." 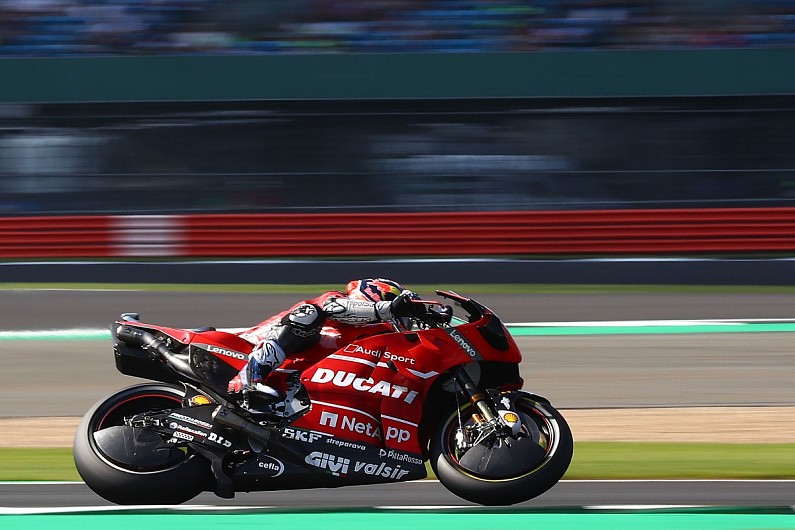 Ducati team manager Davide Tardozzi elaborated on the condition of Dovizioso, who suffered from temporary memory loss after the crash.

"Andrea now is going by helicopter to Coventry because they would like to take a scan. For a couple of minutes - 15-20 minutes - he lost his memory.

"Finally he remembered everything - in the beginning he said he [had] made a big fault, then he said no. He started to think and he said 'oh, [it] was not my fault'.

"We started to joke a bit but the medicians [doctors] would like to make these scans to be sure. He has pain on the right side of the hip but finally is nothing broken.

"We'll what the scan says tonight and I hope that he will be in Misano for the test."

The Misano test will begin in four days' time, on 29th and 30th August.