As the grid lined up for the start of the 2016 Dutch TT - the first MotoGP race in the Netherlands not to be held on its traditional Saturday slot - 167 grands prix had passed since a rider on a satellite machine took to the top step of the podium. That streak would be ended by an unlikely figure

In one of MotoGP's most dramatic days, Toni Elias beat Valentino Rossi by 0.002 seconds at Estoril in 2006 to win for the Gresini team on a customer Honda and give the RC211V its final victory, as the switch to 800cc bikes for 2007 birthed the initially troublesome RC212V. In the grand scheme of things, Elias' win would also ultimately deny Rossi the 2006 title, but that's not really important to this feature.

In the ensuing decade, only factory riders won races, and - victory for factory Ducati stand-in Troy Bayliss at Valencia in 2006 aside - only Yamaha, Honda and Ducati works runners would take the top honours.

As the financial crisis of 2008 bit hard, interest in MotoGP began to wane - both from an entertainment perspective and manufacturer interest. Promoters Dorna Sports could see rot beginning to set in, and mapped out a plan that would start with controversially populating the field with production-based machines from 2012 with the CRTs, introducing concessions for new and struggling manufacturers to give them a leg up, and ultimately mandate spec electronics for the entire grid.

The latter came into force for the 2016 season. As did Dorna's new agreement with the satellite squads, which offered them a significant financial boost - chief amongst which was the payment of €2million to those teams to put towards leasing bikes.

It was hoped all of this would lead to more Estoril 2006 situations, but so far only works Yamaha and Honda-mounted riders had won the first seven rounds of the 2016 campaign.

That changed when the paddock - and thick, grey clouds - rolled into the Netherlands and to the iconic TT Circuit Assen. On that day, an unlikely history-maker was triumphant. 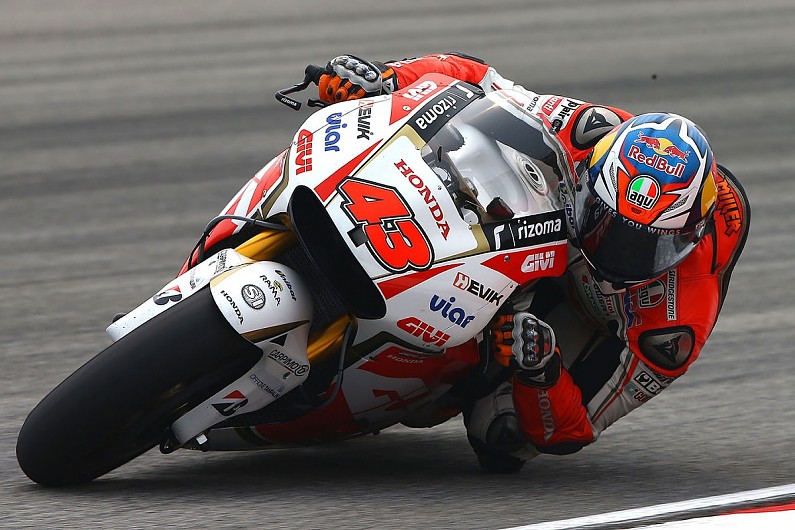 Jack Miller was an exciting, if unpredictable talent, missing the 2014 Moto3 crown by just two points to Alex Marquez. The Australian had done enough for Honda to take a punt and sign him on a three-year deal to move directly up to MotoGP for 2015 with the LCR squad aboard the woefully underpowered RC213V-RS Open class bike.

Results were hard to come by as a result, while Miller had garnered a negative reputation in the paddock for his demeanour on and off the bike. LCR scaled back its operation to one bike for 2016, with Honda placing him at Marc VDS for its sophomore MotoGP campaign. Reputation aside, the Miller/Marc VDS pairing was one then-team boss Michael Bartholemy was keen on.

"I must say he was somebody I already wanted to have in Moto2, so he was a rider I had looked at for a long time," he told Autosport. "When we could sign him in MotoGP, it was a good opportunity. For me, Jack Miller is one of the most fantastic people I ever met in my life. He is a very nice person, he is a very well-educated person, and I think he is like some of these special guys - completely different when you know them on a private side."

"The voice was gone pretty much immediately after I crossed the finish line. But it was a very emotional day for me, for the team. Michael Bartholemy had teams before in the past, but they put a lot of work into that [Marc VDS] project," Jack Miller to BT Sport

Beginning the year on an RC213V close to what factory duo Marc Marquez and Dani Pedrosa had, the Marc VDS-run Honda wasn't afforded the same development. From the first eight races, Miller scored on just two occasions - though managed a career-best 10th at Catalunya.

Miller qualified a lowly 19th at Assen, but a damp track presented an opportunity. The Australian had previous in the rain, running inside the top six at a soaked Silverstone the year before, until he unfortunately wiped out his LCR team-mate Cal Crutchlow at Club corner after an audacious dive went wrong. After the first lap at Assen, Miller found himself well inside the points in 12th.

Cracking the top 10 by lap three, he made his way up to eighth behind his former stablemate and best mate Crutchlow when a biblical downpour forced the appearance of the red flag on lap 15. For Miller, a restart was most unnecessary.

"When we got that rain in the centre part of the race, there was so much of it," he told BT Sport last month. "Down the back straight at Assen, we probably had two inches of standing water on the track. Being on a GP bike with a heap of power, she was just [wheelspinning], you couldn't open the gas. So that was pretty dodgy. 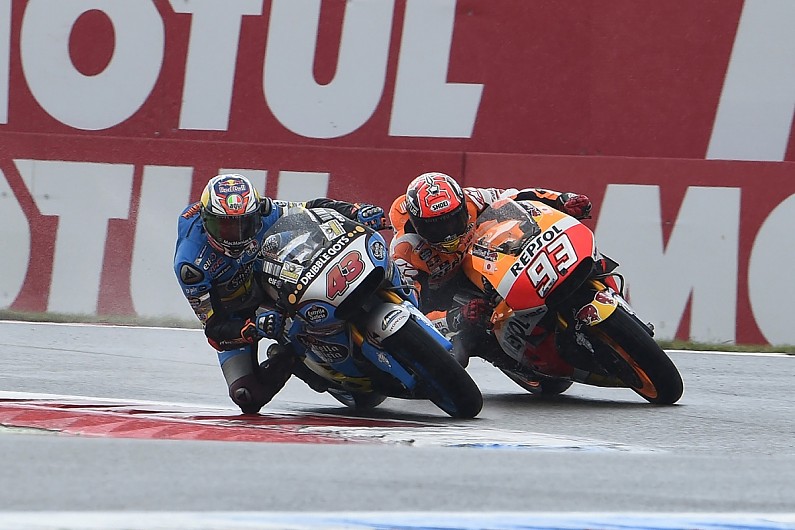 He hid his reservations well. After a lengthy delay, the race was re-run over 12 laps with Miller launching from eighth. Off the line he charted a path through the wall of water and motorcycles into sixth at Turn 1 and carved his way past the Pramac Ducati of Danilo Petrucci to move into fourth.

Andrea Dovizioso then crashed his works Ducati on lap two amid the tricky conditions, while Rossi subsequently chucked his Yamaha into the scenery on the following tour. Only double MotoGP champion Marquez stood in a charging Miller's way. The misfortune for his title rivals led Marquez to play it safe, and as Miller - with nothing to lose - eased up on him and threw his customer Honda up the inside of the final chicane, Marquez accepted his fate.

Having borne witness to how merciless the conditions could be, Miller kept his powder dry and gently built up an advantage of a couple of seconds to the chasing Marquez. Despite a few twitches as he applied the throttle on his final tour, Miller could not be denied a result of pure vindication.

"I don't know what to feel at the moment," Miller, who'd screamed his voice away on the cooldown lap, said immediately after the race. "A lot of people have bad-mouthed us and said this project wouldn't work and things like that. I just hope that we've shown them that I can ride a bike, I'm not an idiot. Thank you to Honda for taking this risk on me, it's amazing."

Miller later reflected: "The voice was gone pretty much immediately after I crossed the finish line. But it was a very emotional day for me, for the team. Michael Bartholemy had teams before in the past, but they put a lot of work into that [Marc VDS] project. On the customer Honda, we were on quite an old machine, [with] a lot less superior electronics. So, we needed the conditions to be right for us in order for us to be up the front there, really trying to give those guys a run."

Bartholemy and Marc VDS had a knack for talent spotting, rearing the likes of 2019 British Superbike Champion - and third-place finisher on that day at Assen - Scott Redding, 2014 Moto2 champion Tito Rabat and 2017 Moto2 title winner Franco Morbidelli. He knew they had something special with Miller, but for him that "dream" Assen results was a combination of factors for the young MotoGP outfit. 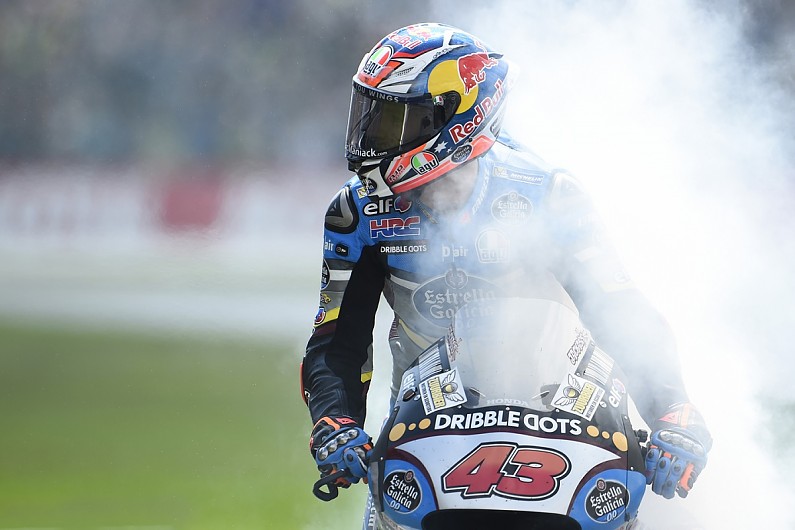 "To win a race in MotoGP, it's something many, many people dream about," Bartholemy tells Autosport. "When you are a child, and when you see your heroes on the television and you think 'OK, one day if [I could win] one of those races in MotoGP, then it would be great'. That day was coming.

"I got a fine off Honda one night doing a 'shoey' at one of the after-parties. When I won, [I thought] 'well, they can't give me a fine for this!'" Jack Miller to BT Sport

On the podium, Miller - never one to shy away from speaking his mind - coined the 'shoey' celebration, which was actually a middle-finger response to the bosses at Honda.

"[The shoey] was a slight dig, because I was having trouble in my first year in MotoGP with misbehaving and whatnot," he revealed. "I got a fine off Honda one night doing a 'shoey' at one of the after-parties. When I won, [I thought] 'well, they can't give me a fine for this!'"

Miller's Assen win was the first in a series of results which shook the foundations of MotoGP: Crutchlow doubled up the satellite success two rounds later at Brno, Ducati won for the first time since 2010 in Austria courtesy of Andrea Iannone, while Suzuki would bag its first victory in almost a decade thanks to Maverick Vinales at Silverstone. These fell in a sequence of eight-successive different winners, while Andrea Dovizioso ensured the tally reached an unprecedented nine come the Malaysian GP.

Though the new Michelin tyres played their part, MotoGP's vision for a golden age through its major revolution at the start of the year was coming to fruition. 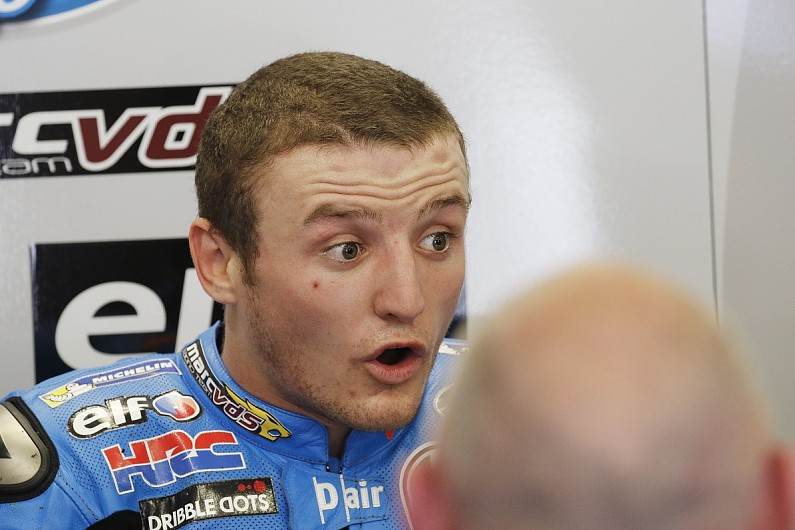 The rest of the 2016 season for Miller failed to scale the same lofty heights, and injury left him on the sidelines four races.

A consistent 2017 secured him a place on a year-old Ducati with Pramac for 2018, earning a works contract and bike for 2019, on which he managed five podiums. He'll join the factory Ducati squad in 2021.

Marc VDS, unfortunately, would never see a MotoGP podium again. After controversy over finances engulfed the Belgian squad in 2018, leading to the loss of a Suzuki partnership, it withdrew from the premier class at the end of the year.

But what the team and Miller achieved together on that wet June day at Assen has been etched into the history of MotoGP as one of the true underdog results of the modern era. 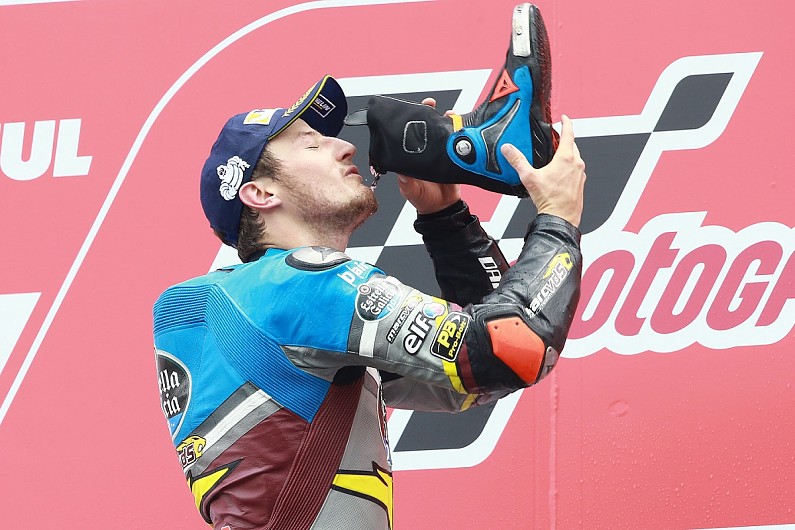