On this day in 2012, Casey Stoner dropped the bombshell that he'd be retiring at the end of the season. On that Thursday afternoon in France, the double MotoGP world champion shattered Honda's hopes of assembling the ultimate dream team for 2013

On 17 May 2012, MotoGP's greatest enigma shocked the world on the eve of the French Grand Prix when Casey Stoner announced his retirement from racing at the age of just 27, despite having only just entered his seventh season in the premier class.

It's a suject that still prompts much discussion and confusion to this day. Arguably the most naturally talented rider to have ever graced a circuit, Stoner's immensely short MotoGP career was a whirlwind of success.

After a solid, if a bit crashy, debut campaign on the LCR Honda in 2006, Stoner dropped jaws when he guided Ducati to its only premier class title in 2007, with a dominant 10 victories from 18 rounds. He continued to show well on the Desmosedici in the following seasons, finishing runner-up to Valentino Rossi in 2008 and scored a futher seven wins over the next two seasons as he proved to be the only rider who could conjure anything from the extremely difficult machine.

Feeling scorned by Ducati while it attempted to court Yamaha's Jorge Lorenzo for 2011, he took up residence with Honda for '11 and a second world title followed that same season, again scoring 10 victories. So there was no doubt as to who was favourite coming into MotoGP's major formula change from 800cc to 1000cc machinery for 2012.

Despite a tough winter, in which the RC213V was hit hard by late changes to the weight rules and a new construction Bridgestone front tyre (which caused terrible front chatter), as well as arm-pump issues for Stoner, the Australian finished third in Qatar and won the following two rounds in Spain and Portugal to hold a one-point lead in the standings heading to Le Mans.

Rumours of retirement had already cropped up prior to the Estoril race through the Spanish press. Stoner refuted them at the time, but doubt had crept into his mind. 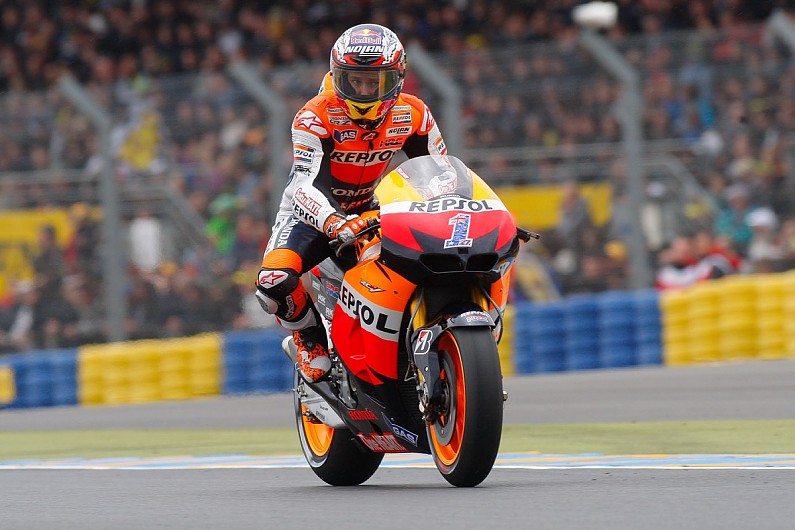 MotoGP introduced the radical new CRT (Claiming Rule Teams) regulations, which - in a bid to boost dwindling grid numbers - allowed outfits to run production-based machinery. At the time, series promoters Dorna Sports had threatened the dominant manufacturers Honda and Yamaha that CRTs would be the future of the class if they didn't unite in the vision Dorna had to make the championship more competitive. Stoner hated the concept of the bikes, he hated that top CRT runners were allowed into parc ferme after the races, and he hated the prospect that one day he could be racing CRTs.

But that was just one factor playing on his mind. The other side, and really the driving force behind his decision to retire, was his dislike for everything that went with motorcycle racing - the PR activities, dealing with the press and the relentless travel.

"There are a lot of similarities to how [Andre] Agassi and Casey lived their sporting lives," former Honda MotoGP team boss Livio Suppo tells Autosport. "They loved the sport, but in the meantime they hated many things around it and Casey didn't like all the PR activities and travelling so much.

"He had been travelling all his life and had done everything... I mean, until [age] 27, he did nothing more than racing, since he was a kid."

After a childhood spent tearing up the dirt tracks of Australia, Stoner's family - all too aware of what young Casey's talent could bring him - uprooted their lives to further his career. Stoner ended up in Britain, living in a caravan with his parents while he raced the national scene and quickly climbed the national racing ladder, making the odd European and World Championship outing before his full-time grand prix debut in the 250cc class in 2002.

In his Pushing the Limits autobiography, Stoner is convinced there was a leak from Honda to the press that fuelled the retirement rumour - a tactic he believes was meant to pressure him into signing. At the time, Honda had waved a lucrative one-year extension in front of him for 2013, but it was futile.

"We were really sad, especially [then HRC president Shuhei] Nakamoto-san," Suppo recalled when asked by Autosport what his feelings were when Stoner notified Honda of his plans. 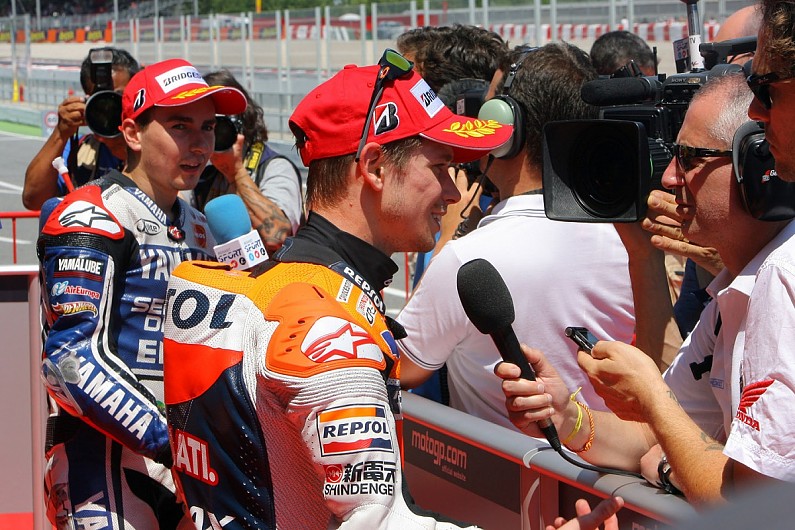 "[Nakamoto] was in love with Casey because he was the first rider who took HRC back to the title [in 2011]. He had a lot of respect for him and really he was sad.

Stoner announced the news in Thursday's pre-event press conference at Le Mans. Bucking the soppy trend these things typically take on, Stoner made clear the displeasure he had been feeling. Never one to shy away from speaking his mind, it was a very Stoner way of bowing out.

History shows us that Dani Pedrosa would remain with Honda going forward, with Marc Marquez joining him in a move made possible by MotoGP's relaxing of the rookie rule, which dictated no debutants could ride for a factory team for the first year of their career.

But, Stoner's retirement brought the possibility of an enthralling alternate reality crashing down around Honda. At the time, everything was being put in place for Stoner to be partnered by Marquez for 2013 - a true dream team.

"Basically, Marc was already under contract because we did the contract in 2011 whilst he was racing in Moto2," Suppo tells Autosport. "He had a one-year contract to do Moto2. So, the original idea was to do Casey and Marc [as the 2013 line-up], and see what was going on with Dani [Pedrosa] and see what to do with him."

In many ways, Marquez - in terms of riding - is a Stoner clone. The pair as team-mates in 2013 on what was a very strong Honda package would have been a devastating force - although Suppo cautions that, for the team, it may well have been a bigger headache. 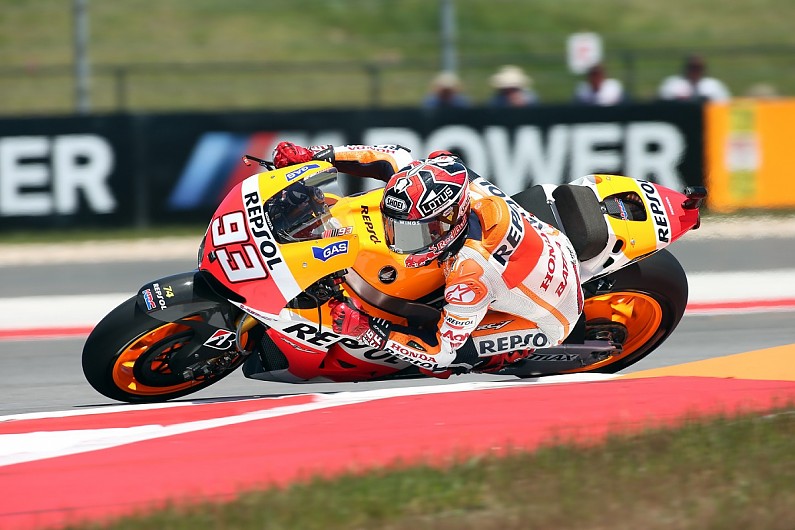 Stoner faced up to stiff opposition in his time, seeing off the likes of Rossi, Lorenzo and Pedrosa. But Marquez would surely have offered him his biggest challenge yet. Would that have been enough to convince Stoner into extending his career further?

"Impossible to reply," Suppo offers. "I have really no idea. In terms of speed, it was difficult to push Casey more than what he was already pushing by himself. I don't know, I think it would have just been interesting to have seen the battles on track."

Interesting it most certainly would have been. Not that Honda really missed out on much success in the seven years since.

Honda looked to have finally secured the dream team Stoner denied them in 2012 when it signed Lorenzo for 2019, but the reality was much different

Stoner would surely have won the title in his final year, but three rounds on the sidelines due to an ankle injury mid-season curtailed his charge, and he would end the campaign third in the standings.

He remained in the Honda family as test rider, though the partnership would turn sour following a stuck throttle with the CBR1000RR at the 2015 Suzuka 8 Hours that caused Stoner to crash heavily, suffering a broken scapula and fractured tibia.

In the post-Stoner MotoGP era, Marquez has more or less brushed the memory of the Australian under the HRC rug by way of his six premier class titles.

Honda looked to have finally secured the dream team Stoner denied them in 2012 when it signed Ducati outcast Lorenzo for 2019. The reality was much different (he was its fourth option after Johann Zarco, Andrea Dovizioso and Joan Mir slipped through its fingers), and the end result was a nightmare which ultimately ended the Spaniard's career.

During his stint as a Ducati test rider from 2016 to 2018, Stoner came close to making a wildcard appearance, but it never came to pass and he is now enjoying life with his family at home in Australia.

Honda's original 2013 line-up remains MotoGP's greatest 'what-ifs'. Sadly, the prospect of a Stoner/Marquez Honda line-up will forever remain entombed in the realm of fantasy in the minds of MotoGP fans. 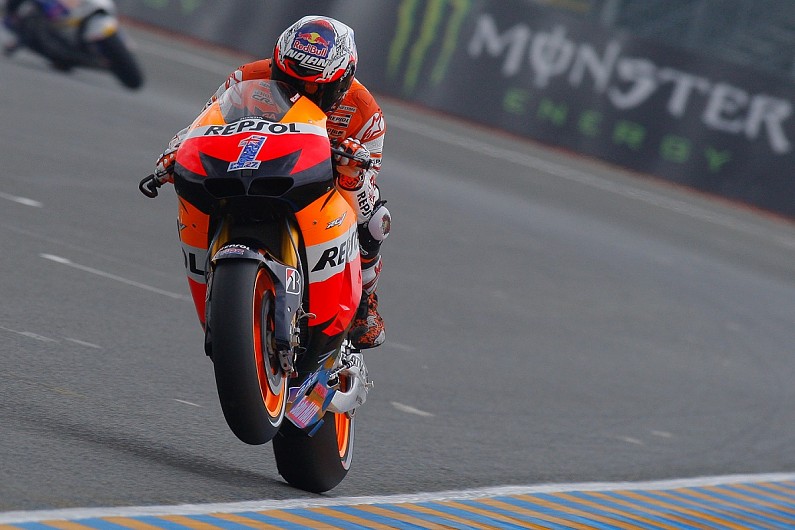