Biaggi stepped up to the premier class in 1998 as reigning four-time 250cc world champion, winning on his 500cc debut in Japan, before going onto win a further 12 grands prix over the next eight seasons.

Most famously, Biaggi engaged in a bitter rivalry with Rossi in the early 2000s, which even resulted in a fist fight prior to the podium celebrations in Barcelona in '01.

The pair enjoyed many thrilling on-track battles, with their duel at Welkom in South Africa at the start of '04 - Rossi's debut race on the Yamaha - one of the most fondly remembered.

Speaking after a replay of that race as part of BT Sport's 'Greatest Race' series, Biaggi says both he and Rossi's "real rivalry" was a "gift".

"It was kind of good and bad. In that moment, it was very high stress races and months and years, but of course you get back some good vibes when you get a good result or step up on the podium.

"But over the years I really understand that those five, six, seven years that I did over there [in the premier class] was very intensive and it was a gift because together with Rossi we gave to the audience, to the people, a great, real rivalry on the track [and] outside the track - because we were still different people.

"I respect him and I think he feels the same, but over the years now I miss that moment, I miss those years and I wish I could go back." 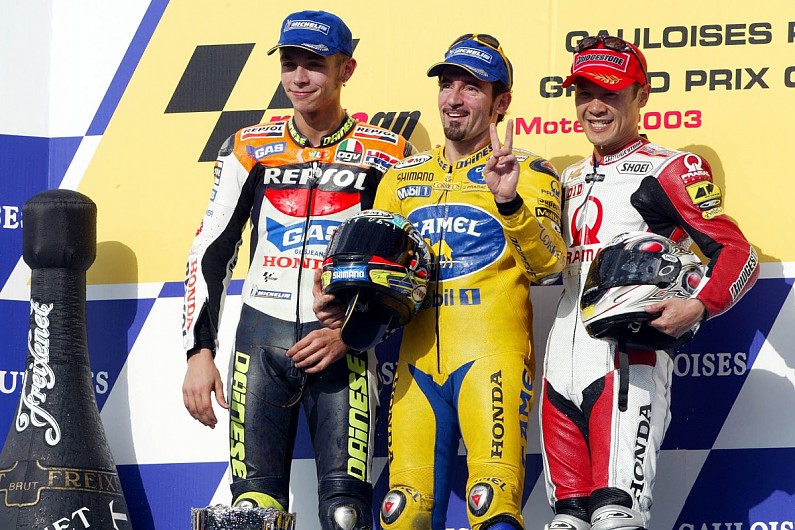 After a winless '05 campaign with Repsol Honda, Biaggi was unable to get a deal together for '06, and made a switch to the World Superbike paddock the following year where he won the title twice between '07 and his final year of racing in '12.

Reflecting on his career as a whole, Biaggi said: "No regrets.

"What I did from a sporting point of view was good, fantastic, and if I could ask [for] more it's not reality, it's a dream.

"I achieved what I was hoping to achieve, which was to be the number one of the category that I started in - which was 250s - and then slowly I stepped up to 500s and then four-strokes with the new era [in MotoGP], and then Superbike.

"I [raced] many categories, [had] many difficulties, and during the years I'm pretty satisfied and I feel strong still now.

"I have no big problems, not so many broken bones, so I'm pretty happy."

Biaggi returned to the MotoGP paddock last year as team owner of the Max Racing Moto3 squad, which fought for the title last season with Aron Canet.

The team has expanded to two riders this year, with Romano Fenati and Alonso Lopez lining up on KTM's badged as Husqvarna's.

Watch 'The Greatest Race' live every Sunday at 10am on BT Sport 1, as Neil Hodgson and Gavin Emmett continue their quest to find the greatest MotoGP race of all time