Yamaha's Maverick Vinales topped the second practice session ahead of the Dutch TT with a lap just 0.011s shy of the Assen MotoGP lap record.

Andrea Dovizioso led most of the session with a 1m33.223s on the Ducati, before the majority of the field fitted fresh tyres for a time attack in the closing stages, with Vinales proving the fastest. 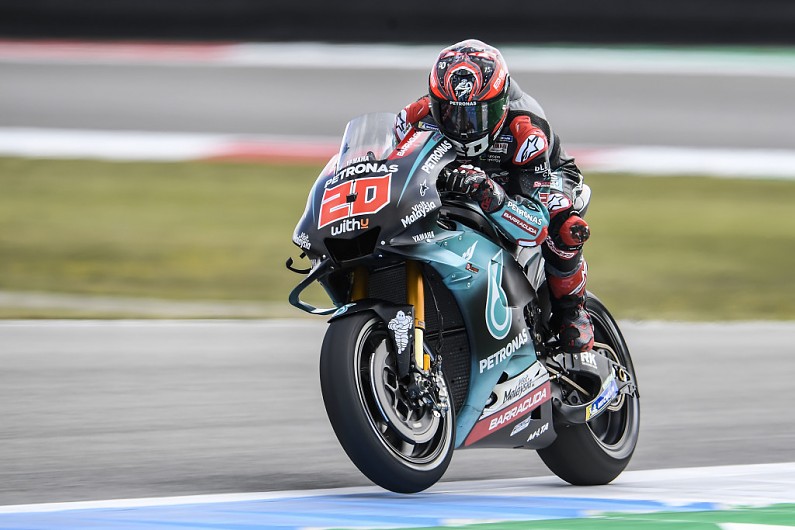 Marc Marquez set the initial pace in the afternoon session with a 1m33.945s on the Honda, which he immediately bettered with a 1m33.835s.

Andrea Iannone held a shock lead briefly in the session after following Marquez for a fast lap, but was soon deposed by Dovizioso.

Petrucci was followed by his team-mate Dovizioso, Suzuki's Alex Rins completing the top five ahead of Iannone - who crashed in the dying stages while on a hot lap.

Iannone still outpaced Marquez, who was followed by the sister Suzuki of Joan Mir, a late-improving Rossi and LCR Honda's Cal Crutchlow.

Rossi had spent much of Friday outside of the provisional Q2 places, having ended FP1 12th, but jumped up to ninth in the closing stages with a 1m33.517s lap.

KTM had a low-key session, with its quickest rider Pol Espargaro only taking 15th and Johann Zarco crashing at Turn 7 on his way to 17th on the timesheets.

Following his crash at the Ruskenhoek left-hander of Turn 7 in FP1, Honda's Jorge Lorenzo was forced to sit out FP2 while he underwent scans in hospital, and will miss the remainder of the Assen weekend.