Yamaha rider Maverick Vinales has explained why he initially served the wrong penalty for a jump start during the Austin MotoGP race.

Vinales was given a ridethrough penalty for jumping the start at the Circuit of the Americas, but he first took the new Long Lap Penalty - where a rider goes through a marked area off-track, which costs them several seconds - before also going through the pitlane.

It was the second time a rider has mistakenly served a Long Lap Penalty since the punishment was introduced in the season opener in Qatar, where Romano Fenati did the same in the Moto3 race.

Vinales referred to recent Safety Commission talks about changing the penalty from a ridethrough, prompted by the controversy surrounding Cal Crutchlow's similar penalty in Argentina, as the reason for his misunderstanding.

He said he "thought" the penalty change had been adopted but now realised it was "nothing official" and accepted that he had made a mistake both on the startline and in his interpretation of the penalty.

"It was just that I misunderstood, it was all my fault," he said.

"We were so close to a good start. I just [applied] full gas, the first two or three seconds were OK and then in the last moment I started to move.

"I did not release the clutch, nothing.

"The good point at least is I overtook some riders in the start. That was the positive.

"I misunderstood the penalty a little bit."

Joan Mir also jumped the start at Austin and Crutchlow was penalised for the same offence at Termas de Rio Hondo, as an otherwise rare penalty was applied three times in two races.

When asked if race control has become stricter about enforcing jump starts, Vinales said: "No, not severe, finally it is the same.

"I moved. If you move, you get the ridethrough.

"If you gain time on the start you have to have a ridethrough, there are no excuses." 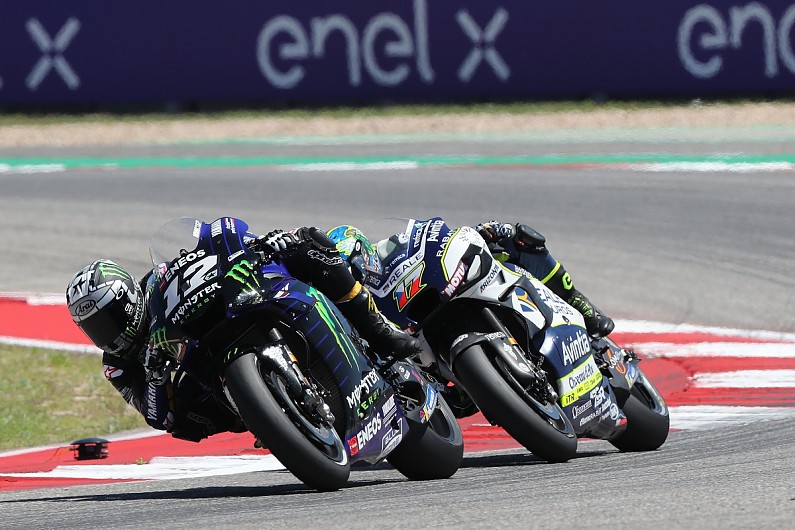 Despite the penalty, Vinales felt that he had a strong race as he recovered to 11th place.

"It was a good race for us here this year, we showed really good pace," he added.

"After the ridethrough I could ride easily in 2m04s.

"I did not expect to finish 11th because I was so far from the guys [after the penalties] but I was catching some by two or three seconds per lap.

"It was not bad, I was riding well, feeling good on the bike.

"If I was in the front I could go even faster but it is like this, we cannot change it, we just have to think about Jerez."