Valentino Rossi admitted Alex Rins was simply better than him in their battle for victory in MotoGP's Grand Prix of the Americas at Austin.

Rossi inherited the lead when Marc Marquez crashed out while holding a comfortable advantage just before half-distance.

Seven-time MotoGP champion Rossi then seemed well-placed for a first race win since Assen in June 2017.

But Rins managed to stick close to Rossi's tail, and with four laps to go he whipped up the inside of his Yamaha adversary at the fast Turn 7 left-hander to take the lead.

Rossi tried to fight back, but ran wide at Turn 12. He was never able to get close enough to Rins again to make another bid to retake the advantage, ultimately settling for second.

"I'm very sorry for [losing] the victory," said Rossi in parc ferme. "When I saw Marquez crash, I said, 'maybe I can do it', but then Rins arrived.

"Sincerely, I pushed at the maximum, the race was very fast, but in the end he was better than me, he rode very well and I was not able to overtake.

"It's a shame because I haven't won for a long time, but anyway we are strong and we will try next time."

As well as scoring his first-ever win in MotoGP, Rins ended a Suzuki victory drought stretching back to Maverick Vinales' Silverstone success in 2016. 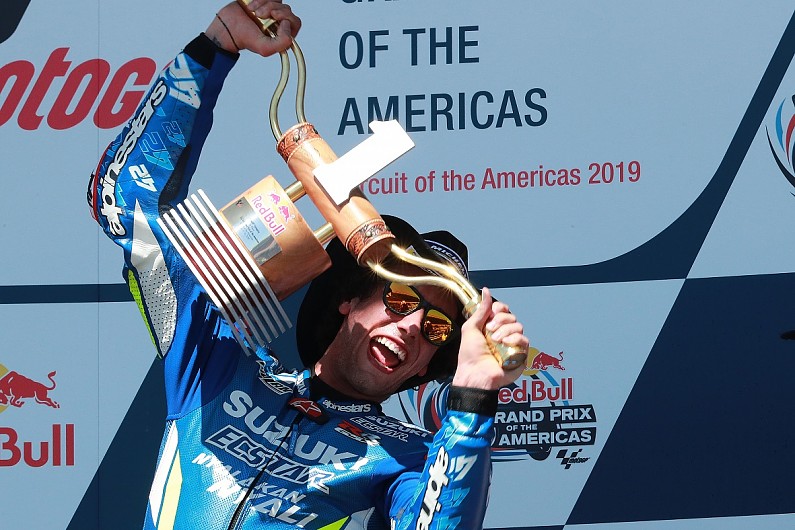 "I'm so happy, I have no words to explain these feelings," said an emotional Rins.

"Thanks to Suzuki, they did a really job, [making] a good bike all these years.

"I did my maximum, I'm so happy, my feeling is incredible.

"I beat Valentino, this is unbelievable for me, he was my idol when I was very young.

"For sure when we did the pre-season, I believed we could win a race. We have a strong bike. In Qatar the victory was very close, in Argentina we started from the back.

"In warm-up, for us it was a disaster. We tried a different set-up and it was worse, and for the race we came back to the standard set-up, and it was incredible."