Marc Marquez recovered from a crash in qualifying to take an imperious win in the Aragon Grand Prix, retaking sole ownership of the MotoGP points lead in the process.

From fifth on the grid, Marquez suffered a slow start but profited from poleman Maverick Vinales running wide at the end of the first lap to take fourth behind a fast-starting Jorge Lorenzo, Valentino Rossi and Andrea Dovizioso, with whom he arrived in Aragon level on points.

It soon became apparent that Marquez had superior pace to his rivals, although it took him until the sixth lap to find a way by Dovizioso, as Lorenzo maintained a small lead over Rossi out front.

From there, Marquez quickly cruised up to the back of Rossi, and attempted an audacious double-overtake on he and Lorenzo at Turn 12 on the ninth lap.

This backfired, as he ran out wide and dropped back behind Dovizioso, but the following lap the Spaniard once again passed his main title rival.

Two laps later, Rossi was powerless to defend against Marquez, slipping behind at the Turn 16/17 complex, and soon the Honda man was all over the back of long-time leader Lorenzo.

What turned out to be the decisive move of the race came on lap 16, as Marquez slithered by Lorenzo's Ducati at Turn 12 and streaked to a fifth victory of the season by a margin of 0.879s.

After being passed by Marquez, Lorenzo was then reeled in by the second works Honda of Dani Pedrosa, who had already made short work of Vinales, Dovizioso and Rossi.

Pedrosa made the move on Lorenzo with two laps to go to give the Repsol Honda squad its third one-two finish of the year.

Lorenzo nonetheless claimed his first podium finish since May's Jerez race, and enjoyed his longest stint in the lead of a race since joining Ducati with a 15-lap spell out front. 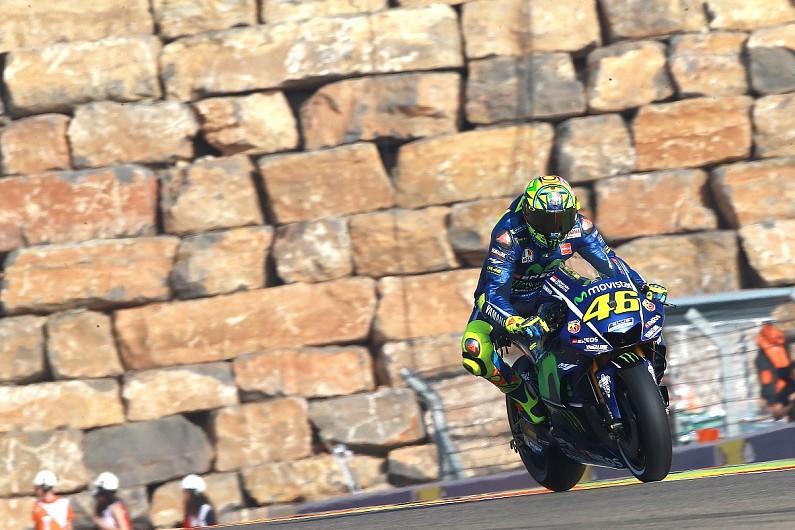 The battle for fourth was an-all Yamaha affair, with Rossi unable to contain team-mate Vinales and conceding the place with two laps to go at Turn 1.

Rossi was however able to fend off the Aprilia of Aleix Espargaro in the final two laps to salvage fifth place, a remarkable achievement just 24 days on from breaking his right leg.

Dovizioso's title hopes took a dent with a disappointing run to seventh place, which leaves him 16 points back from Marquez with four rounds to run, while Vinales is 28 behind the lead in third place.

Cal Crutchlow (LCR Honda) was also well in the mix for a top-six placing before running wide at the first corner on lap 11 and then finally crashing out of 10th place on lap 17.