Marc Marquez wrapped up the 2014 MotoGP title with second place behind winner Jorge Lorenzo in the Japanese Grand Prix at Motegi.

Marquez just needed to finish ahead of Dani Pedrosa and Valentino Rossi to clinch his second crown in as many years in the premier class.

He made life harder for himself by falling to seventh through the first corner, as Rossi burst into an immediate lead and his Yamaha team-mate Lorenzo moved up to second through the opening lap.

Marquez was back into fifth place, ahead of Honda team-mate Pedrosa, by the end of lap one, and then picked off the Ducatis of Andrea Iannone and poleman Andrea Dovizioso through the first third of the race.

Rossi led until lap five, when Lorenzo passed him into the right-hander at the end of the back straight.

The Spaniard quickly pulled away, while Rossi soon found Marquez appearing on his tail.

He fended the Honda off as long as he could, and even repassed Marquez after losing the place for the first time, but eventually on lap 16 of 24 Marquez moved into the title-clinching position. 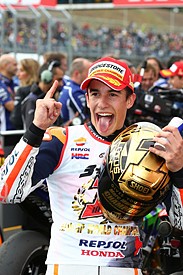 Lorenzo was 2.7 seconds up the road by then, and was able to cruise home for a second straight win.

Marquez chipped a little from Lorenzo's lead and kept Rossi at a safe distance as second place brought him a fourth world championship - with two in MotoGP joining his previous Moto2 and 125cc crowns.

Rossi held on to third despite late pressure from Pedrosa.

Stefan Bradl pursued Iannone for many laps before having to focus on the closing Pol Espargaro instead.

As Espargaro caught Bradl, he shook off Tech 3 Yamaha team-mate Bradley Smith, who finished ninth ahead of Alvaro Bautista.

After their podium finishes in the wet at Aragon, Aleix Espargaro and Cal Crutchlow had tougher days at Motegi.

Off the pace all weekend, Espargaro could only finish 11th and was given a penalty point for colliding with Yonny Hernandez at the final corner.

Crutchlow crashed out of 10th on lap two.

RIDERS' CHAMPIONSHIP AFTER 15 OF 18 ROUNDS: